Thuso Nokwanda Mbedu (born 8 July 1991) is a South African actress. Her breakout role was in the South African teen drama series Is'Thunzi for which she won the 2018 South African Film and Television Award for Best Actress in a Television Drama and nominated consecutively for an International Emmy in 2017 and 2018. [1] [2] [3] She appeared on the 2018 Forbes Africa 30 under 30 list. [4] In 2021, she starred in the Amazon Video limited series The Underground Railroad making her the first South African actress to lead an American television series. It also secured her second SAFTA nomination [5] and the 2022 Independent Spirit Award for Best Female Performance in a New Scripted Series. [6]

Her other television roles include Kitso Medupe in the soap opera Scandal! , [7] Nosisa in Isibaya , and Boni Khumalo in Saints and Sinners. [8] [9] [10] In 2022, Mbedu appeared on the big screen in Gina Prince-Bythewood's historical epic The Woman King in the role of Nawi. [11]

Mbedu was born at Midlands Medical Centre in Pietermaritzburg, KwaZulu-Natal to a Zulu mother and a Xhosa and Sotho father, which is reflected in her multicultural name. [lower-alpha 1] [12] [13] She was raised in the Pelham area by her Zulu grandmother, who became her legal guardian after the passing of both her parents at an early age. [14]

Mbedu attended Pelham Primary School and then Pietermaritzburg Girls' High School. [15] She went on to study Physical Theatre and Performing Arts Management at the University of the Witwatersrand (Wits), graduating in 2013 with honours. [16] The year prior in 2012, she took a course with the Stella Adler Studio of Acting in New York City. [17]

After being unemployed for six months, Mbedu landed her first starring role in television in the Mzansi Magic teen drama series Is'Thunzi , which premiered in October 2016. [9] [18] In the series she played Winnie, a sassy go-getter who dreams of marrying a rich and famous rugby player only to have her dreams dashed when she is exiled to go live with her strict aunt in Bergville. While filming a rape scene for the show, she suffered a panic attack. [19] In September 2017 she was nominated for an International Emmy Award in the category Best Performance by an Actress for her role as Winnie in Is'Thunzi [20] and was the only African to be nominated that year. [21]

Mbedu made her international debut in the 2021 Amazon Video historical limited series The Underground Railroad , based on the novel of the same name by Colson Whitehead and directed and executive produced by Academy Award winner Barry Jenkins. [22] [23] Mbedu earned a Hollywood Critics Association Award, an Independent Spirit Award, and a Gotham Award for the series. [24]

In April 2021, it was announced Mbedu would make her film debut opposite Viola Davis in The Woman King , a historical epic film inspired by the true events that took place in the Kingdom of Dahomey, [25] one of the most powerful states of Africa in the 18th and 19th centuries. The film is set to be directed by Gina Prince-Bythewood, from a script by Fatherhood co-writer Dana Stevens. [11] [26] [27]

The following lists events that happened during 1991 in South Africa. 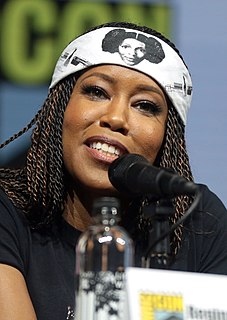 Regina Rene King is an American actress and director. She is the recipient of various accolades, including an Academy Award, a Golden Globe Award, and four Primetime Emmy Awards. In 2019, Time magazine named her one of the 100 most influential people in the world. 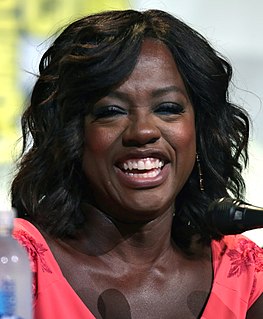 Viola Davis is an American actress and producer. The recipient of various accolades, including an Academy Award, a Primetime Emmy Award, and two Tony Awards, she is the only African-American to achieve the Triple Crown of Acting. She is also tied for the most film wins for an actress at the Screen Actors Guild Awards, and with six overall wins, she is the most awarded African-American. Time magazine named her one of the 100 most influential people in the world in 2012 and 2017, and in 2020, The New York Times ranked her ninth on its list of the greatest actors of the 21st century.

Octavia Lenora Spencer is an American actress. She is the recipient of several accolades, including an Academy Award, a Golden Globe Award, and three Screen Actors Guild Awards. She is one of two women of color to have received three Oscar nominations and the first black actress to receive two consecutive nominations.

Lydia Forson is a Ghanaian actress, writer, and producer. In 2010 she won the African Movie Academy Award for Best Actress in a Leading Role.

Taylour Dominique Paige-Angulo is an American actress and dancer. She is best known for her role as Ahsha Hayes in the VH1 sports drama series Hit the Floor, and has gained recognition for her performances in the films Jean of the Joneses (2016), White Boy Rick (2018), Ma Rainey's Black Bottom (2020), Boogie (2021), and Zola (2020). Her performance in the latter film won her the Independent Spirit Award for Best Female Lead.

Abigail Kubheka is a South African singer, songwriter and actress. On the SABC TV series Generations: The Legacy, she plays the role of Zondiwe Mogale, the mother of Tau Mogale and Tshidi Phakade.

Is'thunzi is a 2016 South African teen drama series centered around a group of four girls and their everyday struggles. Its lead actress, Thuso Mbedu, who portrays Winnie, was nominated for two consecutive International Emmy Awards in 2017 and 2018. In 2018 she won the South African Film and Television Awards (SAFTA) for Best Actress in a Television Drama. Is'thunzi is produced for Mzansi Magic by Rapid Blue.

The Underground Railroad is an American fantasy historical drama streaming television limited series created and directed by Barry Jenkins based on the 2016 novel of the same name by Colson Whitehead. The series premiered on Amazon Prime Video on May 14, 2021.

Jessica Nkosi is a South African actress and TV presenter, best known for her leading roles in M-Net commissioned telenovelas Isibaya, Ayeye, and The Queen.

Ayanda Borotho born 13 January 1981) is a South African actress and former model best known for playing the title role in the SABC 1 sitcom Nomzamo, from 2007-2010, of which she replaced Zinzile Zungu as well as Phumelele Zungu on Mzansi Magic’s telenovela Isibaya.

Nomvelo Makhanya, is a South African Award winning actress and singer. She is best known for her roles in the television serials Isibaya, Soul City and Scandal!. Now recently joined a Netflix film, I am All Girls 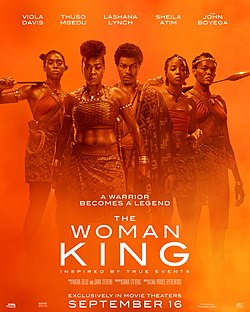 The Woman King is a 2022 American historical epic film about the Agojie, the all-female warrior unit that protected the West African kingdom of Dahomey during the 17th to 19th centuries. Set in the 1820s, the film stars Viola Davis as a general who trains the next generation of warriors to fight their enemies. It is directed by Gina Prince-Bythewood and written by Dana Stevens, based on a story she wrote with Maria Bello. The film also stars Thuso Mbedu, Lashana Lynch, Sheila Atim, Hero Fiennes Tiffin, and John Boyega.

Londeka Mchunu, is a South African actress and model. She is best known for the roles in the television soap operas such as, Isithembiso, Isibaya and House of Zwide.

Lusanda C. Sangoni, popularly known as Lusanda Mbane, is a South African actress, radio personality, speaker and entrepreneur. She is best known for the roles in the television serials Scandal!, Muvhango ,imbewu and generations.

Asavela Mngqithi is a South African actress and model. She is best known for the roles in the television serials Isibaya and Abomama.

The Independent Spirit Award for Best Female Performance in a New Scripted Series was one of the annual Independent Spirit Awards to honor an actress who has delivered an outstanding performance in a new scripted series. It was first presented in 2020 with Shira Haas being the first recipient of the award for her role as Esther "Esty" Shapiro in miniseries Unorthodox and the last recipient of the award is Thuso Mbedu for her role as Cora Randall in The Underground Railroad.

Wikimedia Commons has media related to Thuso Mbedu .
This page is based on this Wikipedia article
Text is available under the CC BY-SA 4.0 license; additional terms may apply.
Images, videos and audio are available under their respective licenses.