The Empire of Thyatis is a powerful state in the Mystara campaign setting for the Dungeons and Dragons fantasy role-playing game. Thyatis was first mentioned in Module X1, Isle of Dread, which describes it briefly. Along with the Alphatian Empire, Thyatis was more fully detailed in the Dawn of the Emperors boxed set. [1] Along with Alphatia, Thyatis is one of the "great powers" of Mystara.

Thyatis (the city) is the capital of the Empire and the largest city on Mystara. It is on the southeastern coast of the continent of Brun, situated between the trade lanes of the Sea of Dread to the south and the Sea of Dawn to the east, alongside a canal ("Vanya's Girdle").

Conceptually, Thyatis is a mixture of different parts of the various historical Roman empires. It is governed by an Emperor and an Imperial Senate as per the classical Roman Empire, but enfranchises a feudal noble class similar to that of the Holy Roman Empire. The Emperor himself is akin to that of the Byzantines (as is the capital city's placement on a major strait). The Imperial Bureaucracy as described in Dawn of the Emperors is clearly inspired by that of the British Empire, as is, at least in name, one branch of the Thyatian Armed Forces, the "Retebius Air Fleet" (RAF), which consists of cavalry on flying mounts (Pegasi, Hippogriffs, Griffons, Sphinxs, Rocs, and Dragons).

Karameikos is ruled by a Thyatian nobility, but the Empire's territories consist of the western half of the Isle of Dawn, the island realms of Ochalea and the Pearl Islands, and the Thyatian Hinterlands on the southern continent of Davania, in addition to its mainland territories on Brun, which are the smallest of the Empire's territories by geographic size, but the most heavily populated and developed of them. The total land area of the Empire is approximately 800,000 square miles (2,100,000 km2). Because of its political geography, Thyatis can best be described as a thalassocracy.

In its long history, Thyatis has ruled other lands, including Traladara (which became Karameikos), the islands of Ierendi, the southern half of Ylaruam, and the city of Oceansend in Norwold. Thyatian settlers have colonized part of the Savage Coast and also the Heldannic Freeholds, which are ruled by a religious order devoted to the Thyatian-descended Immortal Vanya.

Thyatis has a historic rivalry with the Alphatian Empire, and the two imperial powers devote much of their energy and attention to each other. At the start of the official timeline (AC 1000, or thousand years after the crowning of the first Emperor of Thyatis, in the Thyatian calendar), they are locked in a struggle resembling that of the Cold War, and several published high-level modules have their territorial disputes as a backdrop (notably CM 1, M1, M2, and M5).

"Mainland" Thyatis, which includes several islands, has 3,200,000 inhabitants, and consists of the following dominions:

Thyatis' overseas territories, which cover most of the Empire's land area, include:

The adventures of the boxed set Wrath of the Immortals takes place within the context of a great war between the two, climaxing in the weakening of Thyatis and the sinking of the continent of Alphatia. Subsequently, Thyatis conquered a few formerly Alphatian territories, suffered setbacks and plague, and by the final official publication that made much mention of Thyatis ( Joshuan's Almanac ) seemed to be on the road for a gradual recovery. Many campaigns did not use Wrath of the Immortals and the development of their versions of Mystaran countries, particularly Thyatis and Alphatia, may have diverged greatly. In particular those who used earlier published modules, such as CM1 Test of the Warlords or M5 Talons of Night , which involved different conflicts and possible resolutions, could have ended up with very different versions of the Empires than what occurred in the Wrath timeline.

In a review of the adventures Arena of Thyatis and Legions of Thyatis , game designer Ken Rolston called Thyatis "a D&D-game version of ancient Rome", and the city of Thyatis itself an "ancient Roman city", saying: "You have your basic criminal syndicates, debauched and corrupt senators, sinister intrigues, big parties, and lots of hearty Spartacus-style gladiators." [2]

Mystara is a campaign setting for the Dungeons & Dragons fantasy role playing game. It was the default setting for the "Basic" version of the game throughout the 1980s and 1990s. Most adventures published for the "Basic" edition of D&D take place in "The Known World", a central continent that includes a varied patchwork of both human and non-human realms. The human realms are based on various real-world historical cultures. In addition, unlike other D&D settings, Mystara had ascended immortal beings instead of gods.

TSR, Inc. was an American game publishing company, best known as the original publisher of Dungeons & Dragons (D&D). Its earliest incarnation, Tactical Studies Rules, was founded in October 1973 by Gary Gygax and Don Kaye. Gygax had been unable to find a publisher for D&D, a new type of game he and Dave Arneson were co-developing, so founded the new company with Kaye to self-publish their products. Needing financing to bring their new game to market, Gygax and Kaye brought in Brian Blume in December as an equal partner. Dungeons & Dragons is generally considered the first tabletop role-playing game (TTRPG), and established the genre. When Kaye died suddenly in 1975, the Tactical Studies Rules partnership restructured into TSR Hobbies, Inc. and accepted investment from Blume's father Melvin. With the popular D&D as its main product, TSR Hobbies became a major force in the games industry by the late 1970s. Melvin Blume eventually transferred his shares to his other son Kevin, making the two Blume brothers the largest shareholders in TSR Hobbies.

Faerûn is a fictional continent and is the primary setting of the Dungeons & Dragons world of Forgotten Realms. It is described in detail in several editions of the Forgotten Realms Campaign Setting with the most recent being the 5th edition from Wizards of the Coast, and various locales and aspects are described in more depth in separate campaign setting books. Around a hundred novels and several computer and video games use Faerûn as the setting.

Birthright is a Dungeons & Dragons campaign setting that was first released by TSR in 1995. It is based on the continent of Cerilia on the world of Aebrynis, in which the players take on the role of the divinely-empowered rulers, with emphasis on the political rulership level of gameplay. The setting revolves around the concept of bloodlines: divine power gained by heroes and passed to their descendants. Characters with a bloodline create an aura of command known as Regency, which is measured in the game using regency points or RP. Using regency, characters acquire a domain composed of provinces and holdings. The development of these domains is as much a part of the game as development of the characters. The game uses three-month domain turns to model actions of rulers over nations in much the same way as Dungeons & Dragons uses combat rounds to simulate time to model the characters' actions in battle. In 1996, Birthright won the Origins Award for Best Roleplaying Supplement of 1995.

Aaron Dale Allston was an American game designer and author of many science fiction books, notably Star Wars novels. His works as a game designer include game supplements for role-playing games, several of which served to establish the basis for products and subsequent development of TSR's Dungeons & Dragons game setting Mystara. His later works as a novelist include those of the X-Wing series: Wraith Squadron, Iron Fist, Solo Command, Starfighters of Adumar, and Mercy Kill. He wrote two entries in the New Jedi Order series: Enemy Lines I: Rebel Dream and Enemy Lines II: Rebel Stand. Allston wrote three of the nine Legacy of the Force novels: Betrayal, Exile, and Fury, and three of the nine Fate of the Jedi novels: Outcast, Backlash, and Conviction.

The flexibility of the Dungeons & Dragons (D&D) game rules means that Dungeon Masters (DM) are free to create their own fantasy campaign settings. For those who wanted a pre-packaged setting in which to play, TSR, Wizards of the Coast (WotC), and other publishers have created many settings in which D&D games can be based; of these, the Forgotten Realms, an epic fantasy world, has been one of the most successful and critically acclaimed settings. Many campaign settings include standard sword and sorcery environments, while others borrow Asian, Central American, swashbuckling, horror and even space-travel themes. 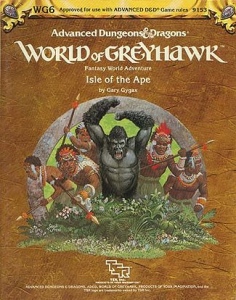 Isle of the Ape is an adventure module for the Dungeons & Dragons role-playing game World of Greyhawk campaign setting, in which the events occur in a magical demiplane of the same name created by the mad archmage Zagyg Yragerne. 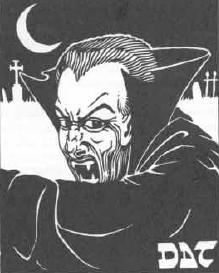 In the Dungeons & Dragons fantasy role-playing game, a vampire is an undead creature. A humanoid or monstrous humanoid creature can become a vampire, and looks as it did in life, with pale skin, haunting red eyes, and a feral cast to its features. A new vampire is created when another vampire drains the life out of a living creature. Its depiction is related to those in the 1930s and 1940s Hollywood Dracula and monster movies. In writing vampires into the game, as with other creatures arising in folklore, the authors had to consider what elements arising in more recent popular culture should be incorporated into their description and characteristics. 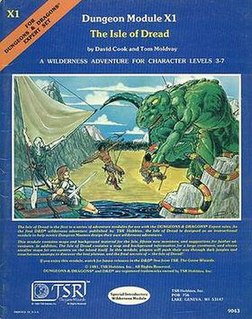 The Isle of Dread is an adventure for the Dungeons & Dragons role-playing game. The adventure, module code X1, was originally published in 1981. Written by David "Zeb" Cook and Tom Moldvay, it is among the most widely circulated of all Dungeons & Dragons adventures due to its inclusion as part of the D&D Expert Set. In the adventure, the player characters search for a lost treasure, journey to the prehistoric Isle of Dread, and there meet new nonhuman races.

Thomas Steven Moldvay was an American game designer and author, best known for his work on early materials for the fantasy role-playing game Dungeons & Dragons (D&D).

The Principalities of Glantri is a fictional nation located within the Mystara campaign setting, in the Dungeons & Dragons fantasy role-playing game.

In Search of Adventure is an abridged compilation adventure module published by TSR, Inc. in 1987, for the Basic Set of the Dungeons & Dragons (D&D) fantasy role-playing game. Its product designation was TSR 9190. This 160-page book features cover artwork by Keith Parkinson.

The Principalities of Glantri is an accessory for the Basic Set edition of the Dungeons & Dragons fantasy role-playing game. It is part of the Gazetteer series of supplements for the Mystara campaign setting.

The Expert Set is an expansion boxed set for the Dungeons & Dragons fantasy role-playing game. It was first published in 1981 as an expansion to the Basic Set. 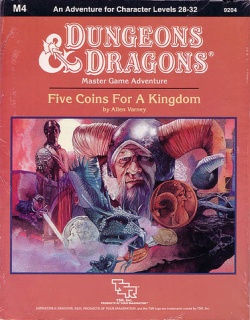 Five Coins for a Kingdom is an adventure module for the Dungeons & Dragons fantasy role-playing game, set in that game's Mystara campaign setting. TSR, Inc. published the module in 1987 for the D&D Master Set rules. It is part of the "M" series of modules. The module was designed by Robin Jenkins. Its cover art and interior art is by John and Laura Lakey, and cartography by William Reuter.

Talons of Night is an Egyptian-themed adventure module for the Dungeons & Dragons fantasy role-playing game, set in that game's Mystara campaign setting. TSR, Inc. published the module in 1987 for the D&D Master Set rules. It is part of the "M" series of modules. The module was designed by Jennell Jaquays. Its cover art is by Daniel Horne. Its interior art is by Jennell Jacquays, and cartography by Dennis Kauth and Steve Sullivan.

Dawn of the Emperors: Thyatis and Alphatia is an accessory for the Dungeons & Dragons fantasy role-playing game.