Congenital hypothyroidism caused by thyroid dysgenesis can be associated with PAX8. [2] 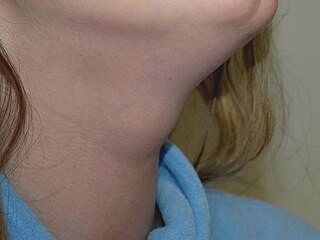 Pendred syndrome is a genetic disorder leading to congenital bilateral sensorineural hearing loss and goitre with euthyroid or mild hypothyroidism. There is no specific treatment, other than supportive measures for the hearing loss and thyroid hormone supplementation in case of hypothyroidism. It is named after Dr Vaughan Pendred (1869–1946), the British doctor who first described the condition in an Irish family living in Durham in 1896. It accounts for 7.5% to 15% of all cases of congenital deafness. 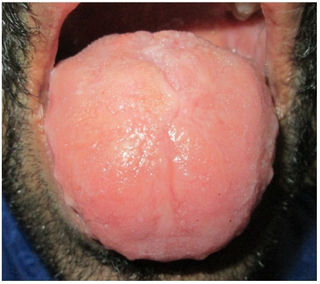 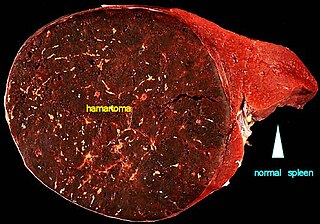 A hamartoma is a mostly benign, local malformation of cells that resembles a neoplasm of local tissue but is usually due to an overgrowth of multiple aberrant cells, with a basis in a systemic genetic condition, rather than a growth descended from a single mutated cell (monoclonality), as would typically define a benign neoplasm/tumor. Despite this, many hamartomas are found to have clonal chromosomal aberrations that are acquired through somatic mutations, and on this basis the term hamartoma is sometimes considered synonymous with neoplasm. Hamartomas are by definition benign, slow-growing or self-limiting, though the underlying condition may still predispose the individual towards malignancies.

The frenulum of tongue or tongue web is a small fold of mucous membrane extending from the floor of the mouth to the midline of the underside of the tongue.

Forkhead box protein E1 is a protein that in humans is encoded by the FOXE1 gene.

Bamforth–Lazarus syndrome is a genetic condition that results in thyroid dysgenesis. It is due to recessive mutations in forkhead/winged-helix domain transcription factor.

Forkhead box protein E3 (FOXE3) also known as forkhead-related transcription factor 8 (FREAC-8) is a protein that in humans is encoded by the FOXE3 gene located on the short arm of chromosome 1.

Salivary gland diseases (SGD) are multiple and varied in cause.