Last updated April 28, 2020
Not to be confused with Dysphasia.

It may be a sensation that suggests difficulty in the passage of solids or liquids from the mouth to the stomach, [7] a lack of pharyngeal sensation or various other inadequacies of the swallowing mechanism. Dysphagia is distinguished from other symptoms including odynophagia, which is defined as painful swallowing, [8] and globus, which is the sensation of a lump in the throat. A person can have dysphagia without odynophagia (dysfunction without pain), odynophagia without dysphagia (pain without dysfunction) or both together. A psychogenic dysphagia is known as phagophobia.

Some patients have limited awareness of their dysphagia [9] , so lack of the symptom does not exclude an underlying disease. [10] When dysphagia goes undiagnosed or untreated, patients are at a high risk of pulmonary aspiration and subsequent aspiration pneumonia secondary to food or liquids going the wrong way into the lungs. Some people present with "silent aspiration" and do not cough or show outward signs of aspiration. Undiagnosed dysphagia can also result in dehydration, malnutrition, and kidney failure.

Some signs and symptoms of oropharyngeal dysphagia include difficulty controlling food in the mouth, inability to control food or saliva in the mouth, difficulty initiating a swallow, coughing, choking, frequent pneumonia, unexplained weight loss, gurgly or wet voice after swallowing, nasal regurgitation, and dysphagia (patient complaint of swallowing difficulty). [10] When asked where the food is getting stuck, patients will often point to the cervical (neck) region as the site of the obstruction. The actual site of obstruction is always at or below the level at which the level of obstruction is perceived.

The most common symptom of esophageal dysphagia is the inability to swallow solid food, which the patient will describe as 'becoming stuck' or 'held up' before it either passes into the stomach or is regurgitated. Pain on swallowing or odynophagia is a distinctive symptom that can be highly indicative of carcinoma, although it also has numerous other causes that are not related to cancer.

Achalasia is a major exception to usual pattern of dysphagia in that swallowing of fluid tends to cause more difficulty than swallowing solids. In achalasia, there is idiopathic destruction of parasympathetic ganglia of the Auerbach's (Myenteric) plexus of the entire esophagus, which results in functional narrowing of the lower esophagus, and peristaltic failure throughout its length.

Complications of dysphagia may include aspiration, pneumonia, dehydration, and weight loss.

Dysphagia is classified into the following major types: [11]

Difficulty with or inability to swallow may be caused or exacerbated by usage of opiate and/or opioid drugs. [12]

Asking the patient about heartburn or acid regurgitation is essential to the diagnostic process because gastroesophageal reflux disease (GERD) is the most common disease associated with dysphagia. [13]

All causes of dysphagia are considered as differential diagnoses. Some common ones are:

Esophageal [15] dysphagia is almost always caused by disease in or adjacent to the esophagus but occasionally the lesion is in the pharynx or stomach. In many of the pathological conditions causing dysphagia, the lumen becomes progressively narrowed and indistensible. Initially only fibrous solids cause difficulty but later the problem can extend to all solids and later even to liquids. Patients with difficulty swallowing may benefit from thickened fluids if the person is more comfortable with those liquids, although, so far, there are no scientific study that proves that those thickened liquids are beneficial.

Dysphagia may manifest as the result of autonomic nervous system pathologies including stroke [16] and ALS, [17] or due to rapid iatrogenic correction of an electrolyte imbalance. [18]

There are many ways to treat dysphagia, such as swallowing therapy, dietary changes, feeding tubes, certain medications, and surgery. Treatment for dysphagia is managed by a group of specialists known as a multidisciplinary team. Members of the multidisciplinary team include: a speech language pathologist specializing in swallowing disorders (swallowing therapist), primary physician, gastroenterologist, nursing staff, respiratory therapist, dietitian, occupational therapist, physical therapist, pharmacist, and radiologist. [10] The role of the members of the multidisciplinary team will differ depending on the type of swallowing disorder present. For example, the swallowing therapist will be directly involved in the treatment of a patient with oropharyngeal dysphagia, while a gastroenterologist will be directly involved in the treatment of an esophageal disorder.

The implementation of a treatment strategy should be based on a thorough evaluation by the multidisciplinary team. Treatment strategies will differ on a patient to patient basis and should be structured to meet the specific needs of each individual patient. Treatment strategies are chosen based on a number of different factors including diagnosis, prognosis, reaction to compensatory strategies, severity of dysphagia, cognitive status, respiratory function, caregiver support, and patient motivation and interest. [10]

Adequate nutrition and hydration must be preserved at all times during dysphagia treatment. The overall goal of dysphagia therapy is to maintain, or return the patient to, oral feeding. However, this must be done while ensuring adequate nutrition and hydration and a safe swallow (no aspiration of food into the lungs). [10] If oral feeding results in increased mealtimes and increased effort during the swallow, resulting in not enough food being ingested to maintain weight, a supplementary nonoral feeding method of nutrition may be needed. In addition, if the patient aspirates food or liquid into the lungs despite the use of compensatory strategies, and is therefore unsafe for oral feeding, nonoral feeding may be needed. Nonoral feeding includes receiving nutrition through a method that bypasses the oropharyngeal swallowing mechanism including a nasogastric tube, gastrostomy, or jejunostomy. [10]

Compensatory Treatment Procedures are designed to change the flow of the food/liquids and eliminate symptoms, but do not directly change the physiology of the swallow. [10]

Therapeutic Treatment Procedures - designed to change and/or improve the physiology of the swallow. [10] [19]

Patients may need a combination of treatment procedures to maintain a safe and nutritionally adequate swallow. For example, postural strategies may be combined with swallowing maneuvers to allow the patient to swallow in a safe and efficient manner.

The most common interventions used for those with oropharyngeal dysphagia by speech language pathologists are texture modification of foods, thickening fluids and positioning changes during swallowing. [20] The effectiveness of modifying food and fluid in preventing aspiration pneumonia has been questioned and these can be associated with poorer nutrition, hydration and quality of life. [21] Also, there has been considerable variability in national approaches to describing different degrees of thickened fluids and food textures.  However, in 2015, the International Dysphagia Diet Standardisation Initiative (IDDSI) group produced an agreed IDDSI framework consisting of a continuum of 8 levels (0-7), where drinks are measured from Levels 0 – 4, while foods are measured from Levels 3 – 7. [22] It is likely that this initiative, which has widespread support among dysphagia practitioners, will improve communication with carers and will lead to greater standardisation of modified diets

Swallowing disorders can occur in all age groups, resulting from congenital abnormalities, structural damage, and/or medical conditions. [10] Swallowing problems are a common complaint among older individuals, and the incidence of dysphagia is higher in the elderly, [23] [24] and in patients who have had strokes. [25] Dysphagia is estimated to affect about 3% of the general population. [13]

The word "dysphagia" is derived from the Greek dys meaning bad or disordered, and the root phag- meaning "eat". 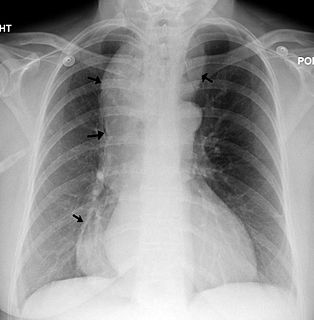 Esophageal achalasia, often referred to simply as achalasia, is a failure of smooth muscle fibers to relax, which can cause the lower esophageal sphincter to remain closed. Without a modifier, "achalasia" usually refers to achalasia of the esophagus. Achalasia can happen at various points along the gastrointestinal tract; achalasia of the rectum, for instance, may occur in Hirschsprung's disease.

An esophageal motility disorder (EMD) is any medical disorder causing difficulty in swallowing, regurgitation of food and a spasm-type pain which can be brought on by an allergic reaction to certain foods. The most prominent one is dysphagia.

Pulmonary aspiration is the entry of material such as pharyngeal secretions, food or drink, or stomach contents from the oropharynx or gastrointestinal tract, into the larynx and lower respiratory tract, the portions of the respiratory system from the trachea (windpipe) to the lungs. A person may inhale the material, or it may be delivered into the tracheobronchial tree during positive pressure ventilation. When pulmonary aspiration occurs during eating and drinking, the aspirated material is often colloquially referred to as "going down the wrong pipe." 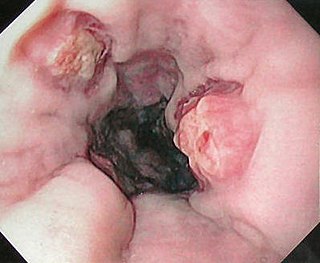 Esophagogastroduodenoscopy, also called by various other names, is a diagnostic endoscopic procedure that visualizes the upper part of the gastrointestinal tract down to the duodenum. It is considered a minimally invasive procedure since it does not require an incision into one of the major body cavities and does not require any significant recovery after the procedure. However, a sore throat is common.

Esophageal webs are thin membranes occurring anywhere along the esophagus. 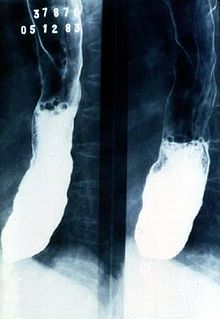 Megaesophagus, also known as esophageal dilatation, is a disorder of the esophagus in humans and other mammals, whereby the esophagus becomes abnormally enlarged. Megaesophagus may be caused by any disease which causes the muscles of the esophagus to fail to properly propel food and liquid from the mouth into the stomach. Food can become lodged in the flaccid esophagus, where it may decay, be regurgitated, or may be inhaled into the lungs.

Thickened fluids and thickened drinks are often used for people with dysphagia, a disorder of swallowing function. The thicker consistency makes it less likely that an individual will aspirate while they are drinking. Individuals with difficulty swallowing may find liquids cause coughing, spluttering or even aspiration and thickening drinks enables them to swallow safely. Patients may be advised to consume thickened liquids after being extubated. Liquid thickness may be measured by two methods, with a viscometer or by line spread test.

Aspiration pneumonia is a type of lung infection that is due to a relatively large amount of material from the stomach or mouth entering the lungs. Signs and symptoms often include fever and cough of relatively rapid onset. Complications may include lung abscess. Some include chemical induced inflammation of the lungs as a subtype, which occurs from acidic but non-infectious stomach contents entering the lungs.

Oropharyngeal dysphagia arises from abnormalities of muscles, nerves or structures of the oral cavity, pharynx, and upper esophageal sphincter.

Esophageal dysphagia is a form of dysphagia where the underlying cause arises from the body of the esophagus, lower esophageal sphincter, or cardia of the stomach, usually due to mechanical causes or motility problems.

Globus pharyngis or globus sensation is the persistent but painless sensation of having a pill, food bolus, or some other sort of obstruction in the throat when there is none. Swallowing is typically performed normally, so it is not a true case of dysphagia, but it can become quite irritating. It is common, with 22–45% of people experiencing it at least once in their lifetime. 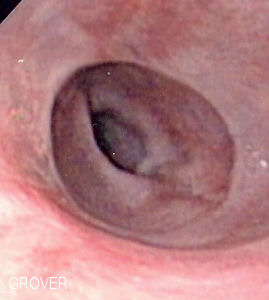 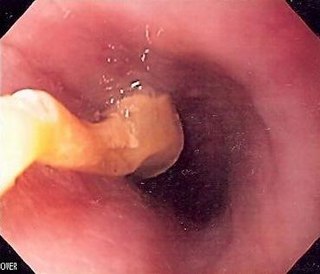 An esophageal food bolus obstruction is a medical emergency caused by the obstruction of the esophagus by an ingested foreign body. 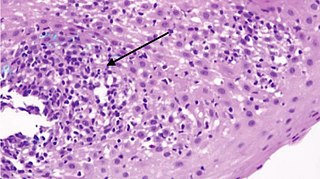 Lymphocytic esophagitis is a rare and poorly understood medical disorder involving inflammation in the esophagus. The disease is named from the primary inflammatory process, wherein lymphocytes are seen within the esophageal mucosa. Symptoms of the condition include difficulty swallowing, heartburn and food bolus obstruction. The condition was first described in 2006 by Rubio and colleagues. Initial reports questioned whether this was a true medical disorder, or whether the inflammation was secondary to another condition, such as gastroesophageal reflux disease.

Achalasia microcephaly syndrome is a rare condition whereby achalasia in the oesophagus manifests alongside microcephaly and mental retardation. This is a rare constellation of symptoms with a predicted familial trend.