Last updated June 24, 2021
Measure of the probability of occurrence of a given medical condition in a population within a specified period of time

In epidemiology, incidence is a measure of the probability of occurrence of a given medical condition in a population within a specified period of time. Although sometimes loosely expressed simply as the number of new cases during some time period, it is better expressed as a proportion or a rate [1] with a denominator.

Incidence proportion (IP), also known as cumulative incidence, is defined as the probability that a particular event, such as occurrence of a particular disease, has occurred before a given time. [2]

It is calculated dividing the number of new cases during a given period by the number of subjects at risk in the population initially at risk at the beginning of the study. Where the period of time considered is an entire lifetime, the incidence proportion is called lifetime risk. [3]

For example, if a population initially contains 1,000 persons and 28 develop a condition since the disease first occurred until a certain point in time, the cumulative incidence proportion is 28 cases per 1,000 persons, i.e. 2.8%.

IP is related to incidence rate (IR) and duration of exposure (D) as follows: [4]

The incidence rate is a measure of the frequency with which a disease or other incident occurs over a specified time period. [5] [6] It is also known as the incidence density rate or person-time incidence rate, [7] when the denominator is the combined person-time of the population at risk (the sum of the time duration of exposure across all persons exposed). [8]

In the same example as above, the incidence rate is 14 cases per 1000 person-years, because the incidence proportion (28 per 1,000) is divided by the number of years (two). Using person-time rather than just time handles situations where the amount of observation time differs between people, or when the population at risk varies with time. [9]

Use of this measure implies the assumption that the incidence rate is constant over different periods of time, such that for an incidence rate of 14 per 1000 persons-years, 14 cases would be expected for 1000 persons observed for 1 year or 50 persons observed for 20 years. [10] When this assumption is substantially violated, such as in describing survival after diagnosis of metastatic cancer, it may be more useful to present incidence data in a plot of cumulative incidence, over time, taking into account loss to follow-up, using a Kaplan-Meier Plot.

Incidence should not be confused with prevalence, which is the proportion of cases in the population at a given time rather than rate of occurrence of new cases. Thus, incidence conveys information about the risk of contracting the disease, whereas prevalence indicates how widespread the disease is. Prevalence is the proportion of the total number of cases to the total population and is more a measure of the burden of the disease on society with no regard to time at risk or when subjects may have been exposed to a possible risk factor. Prevalence can also be measured with respect to a specific subgroup of a population (see: denominator data). Incidence is usually more useful than prevalence in understanding the disease etiology: for example, if the incidence rate of a disease in a population increases, then there is a risk factor that promotes the incidence.

For example, consider a disease that takes a long time to cure and was widespread in 2002 but dissipated in 2003. This disease will have both high incidence and high prevalence in 2002, but in 2003 it will have a low incidence yet will continue to have a high prevalence (because it takes a long time to cure, so the fraction of individuals that are affected remains high). In contrast, a disease that has a short duration may have a low prevalence and a high incidence. When the incidence is approximately constant for the duration of the disease, prevalence is approximately the product of disease incidence and average disease duration, so prevalence = incidence × duration. The importance of this equation is in the relation between prevalence and incidence; for example, when the incidence increases, then the prevalence must also increase. Note that this relation does not hold for age-specific prevalence and incidence, where the relation becomes more complicated. [11]

Consider the following example. Say you are looking at a sample population of 225 people, and want to determine the incidence rate of developing HIV over a 10-year period:

If you were to measure prevalence you would simply take the total number of cases (25 + 20 + 30 = 75) and divide by your sample population (225). So prevalence would be 75/225 = 0.33 or 33% (by the end of the study). This tells you how widespread HIV is in your sample population, but little about the actual risk of developing HIV for any person over a coming year.

To measure incidence you must take into account how many years each person contributed to the study, and when they developed HIV. When it is not known exactly when a person develops the disease in question, epidemiologists frequently use the actuarial method, and assume it was developed at a half-way point between follow-ups.[ citation needed ] In this calculation:

In epidemiology, prevalence is the proportion of a particular population found to be affected by a medical condition at a specific time. It is derived by comparing the number of people found to have the condition with the total number of people studied, and is usually expressed as a fraction, a percentage, or the number of cases per 10,000 or 100,000 people.

Mortality rate, or death rate, is a measure of the number of deaths in a particular population, scaled to the size of that population, per unit of time. Mortality rate is typically expressed in units of deaths per 1,000 individuals per year; thus, a mortality rate of 9.5 in a population of 1,000 would mean 9.5 deaths per year in that entire population, or 0.95% out of the total. It is distinct from "morbidity", which is either the prevalence or incidence of a disease, and also from the incidence rate.

The science of epidemiology has matured significantly from the times of Hippocrates, Semmelweis and John Snow. The techniques for gathering and analyzing epidemiological data vary depending on the type of disease being monitored but each study will have overarching similarities. 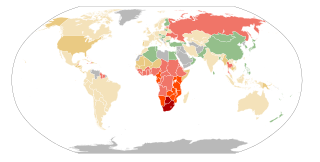 HIV/AIDS, or human immunodeficiency virus, is considered by some authors a global pandemic. However, the WHO currently uses the term 'global epidemic' to describe HIV. As of 2018, approximately 37.9 million people are infected with HIV globally. There were about 770,000 deaths from AIDS in 2018. The 2015 Global Burden of Disease Study, in a report published in The Lancet, estimated that the global incidence of HIV infection peaked in 1997 at 3.3 million per year. Global incidence fell rapidly from 1997 to 2005, to about 2.6 million per year, but remained stable from 2005 to 2015.

In epidemiology, a case fatality rate (CFR) – sometimes called case fatality risk or case-fatality ratio – is the proportion of deaths from a certain disease compared to the total number of people diagnosed with the disease for a particular period. A CFR is conventionally expressed as a percentage and represents a measure of disease severity. CFRs are most often used for diseases with discrete, limited-time courses, such as outbreaks of acute infections. A CFR can only be considered final when all the cases have been resolved. The preliminary CFR, for example, during an outbreak with a high daily increase and long resolution time would be substantially lower than the final CFR.

HIV is recognized as a health concern in Pakistan with the number of cases growing. Moderately high drug use and lack of acceptance that non-marital sex is common in the society have allowed the HIV epidemic to take hold in Pakistan, mainly among injecting drug users (IDU), male, female and transvestite sex workers as well as the repatriated migrant workers. HIV infection can lead to AIDS that may become a major health issue.

Economic epidemiology is a field at the intersection of epidemiology and economics. Its premise is to incorporate incentives for healthy behavior and their attendant behavioral responses into an epidemiological context to better understand how diseases are transmitted. This framework should help improve policy responses to epidemic diseases by giving policymakers and health-care providers clear tools for thinking about how certain actions can influence the spread of disease transmission. 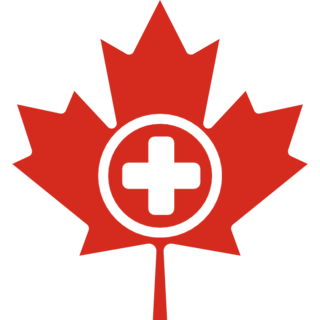 HIV/AIDS was first detected in Canada in 1982. In 2018, there were approximately 62,050 people living with HIV/AIDS in Canada. It was estimated that 8,300 people were living with undiagnosed HIV in 2018. Mortality has decreased due to medical advances against HIV/AIDS, especially highly active antiretroviral therapy (HAART).

Epidemiology of periodontal disease is the study of patterns, causes, and effects of periodontal diseases. Periodontal disease is a disease affecting the tissue surrounding the teeth. This causes the gums and the teeth to separate making spaces that become infected. The immune system tries to fight the toxins breaking down the bone and tissue connecting to the teeth to the gums. The teeth will have to be removed. This is an advance stage of gum disease that has multiple definitions. Adult periodontitis affects less than 10 to 15% of the population in industrialized countries, mainly adults around the ages of 50 to 60. The disease is now declining world-wide.

In epidemiology, data or facts about a population is called denominator data. Denominator data are independent of any specific disease or condition. This name is given because in mathematical models of disease, disease-specific data such as the incidence of disease in a population, the susceptibility of the population to a specific condition, the disease resistance, etc. disease-specific variables are expressed as their proportion of some attribute of the general population, and hence appear as the numerator of the fraction or percentage being calculated, general data about the population typically appearing in the denominator; hence the term "denominator data."

Population impact measures (PIMs) are biostatistical measures of risk and benefit used in epidemiological and public health research. They are used to describe the impact of health risks and benefits in a population, to inform health policy. 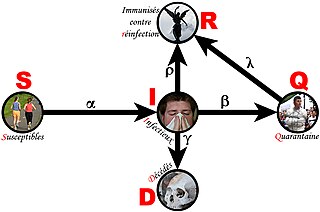 The discipline of forensic epidemiology (FE) is a hybrid of principles and practices common to both forensic medicine and epidemiology. FE is directed at filling the gap between clinical judgment and epidemiologic data for determinations of causality in civil lawsuits and criminal prosecution and defense.