An emerging infectious disease (EID) is an infectious disease whose incidence has increased in the past 20 years and could increase in the near future. Emerging infections account for at least 12% of all human pathogens. [1] EIDs are caused by newly identified species or strains (e.g. Severe acute respiratory syndrome, HIV/AIDS) [2] that may have evolved from a known infection (e.g. influenza) or spread to a new population (e.g. West Nile fever) or to an area undergoing ecologic transformation (e.g. Lyme disease), or be reemerging infections, like drug resistant tuberculosis. Nosocomial (hospital-acquired) infections, such as methicillin-resistant Staphylococcus aureus are emerging in hospitals, and extremely problematic in that they are resistant to many antibiotics. [3] Of growing concern are adverse synergistic interactions between emerging diseases and other infectious and non-infectious conditions leading to the development of novel syndemics. Many emerging diseases are zoonotic - an animal reservoir incubates the organism, with only occasional transmission into human populations.

The U.S. National Institute of Allergy and Infectious Diseases recognizing the following emerging and re-emerging diseases as of 2004. [4]

Diseases with bioterrorism potential, CDC category A (most dangerous):

Since 2004, NIAID has added to its biodefense emerging pathogen list: [5]

NIAID also monitors antibiotic resistance, which can become an emerging threat for many pathogens.

Methicillin-resistant Staphylococcus aureus (MRSA) evolved from Methicillin-susceptible Staphylococcus aureus (MSSA) otherwise known as common S. aureus. Many people are natural carriers of S. aureus, without being affected in any way. MSSA was treatable with the antibiotic methicillin until it acquired the gene for antibiotic resistance. [6] Though genetic mapping of various strains of MRSA, scientists have found that MSSA acquired the mecA gene in the 1960s, which accounts for its pathogenicity, before this it had a predominantly commensal relationship with humans. It is theorized that when this S. aureus strain that had acquired the mecA gene was introduced into hospitals, it came into contact with other hospital bacteria that had already been exposed to high levels of antibiotics. When exposed to such high levels of antibiotics, the hospital bacteria suddenly found themselves in an environment that had a high level of selection for antibiotic resistance, and thus resistance to multiple antibiotics formed within these hospital populations. When S. aureus came into contact with these populations, the multiple genes that code for antibiotic resistance to different drugs were then acquired by MRSA, making it nearly impossible to control. [7] It is thought that MSSA acquired the resistance gene through the horizontal gene transfer, a method in which genetic information can be passed within a generation, and spread rapidly through its own population as was illustrated in multiple studies. [8] Horizontal gene transfer speeds the process of genetic transfer since there is no need to wait an entire generation time for gene to be passed on. [8] Since most antibiotics do not work on MRSA, physicians have to turn to alternative methods based in Darwinian medicine. However prevention is the most preferred method of avoiding antibiotic resistance. By reducing unnecessary antibiotic use in human and animal populations, antibiotics resistance can be slowed. 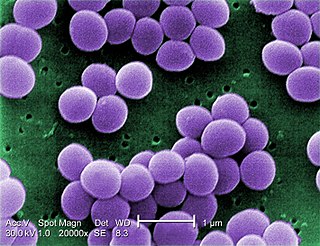 Staphylococcus aureus is a Gram-positive, round-shaped bacterium that is a member of the Firmicutes, and it is a usual member of the microbiota of the body, frequently found in the upper respiratory tract and on the skin. It is often positive for catalase and nitrate reduction and is a facultative anaerobe that can grow without the need for oxygen. Although S. aureus usually acts as a commensal of the human microbiota it can also become an opportunistic pathogen, being a common cause of skin infections including abscesses, respiratory infections such as sinusitis, and food poisoning. Pathogenic strains often promote infections by producing virulence factors such as potent protein toxins, and the expression of a cell-surface protein that binds and inactivates antibodies. The emergence of antibiotic-resistant strains of S. aureus such as methicillin-resistant S. aureus (MRSA) is a worldwide problem in clinical medicine. Despite much research and development, no vaccine for S. aureus has been approved.

Methicillin-resistant Staphylococcus aureus (MRSA) refers to a group of Gram-positive bacteria that are genetically distinct from other strains of Staphylococcus aureus. MRSA is responsible for several difficult-to-treat infections in humans. MRSA is any strain of S. aureus that has developed, through horizontal gene transfer and natural selection, multiple drug resistance to beta-lactam antibiotics. β-lactam antibiotics are a broad-spectrum group that include some penams and cephems such as the cephalosporins. Strains unable to resist these antibiotics are classified as methicillin-susceptible S. aureus, or MSSA. 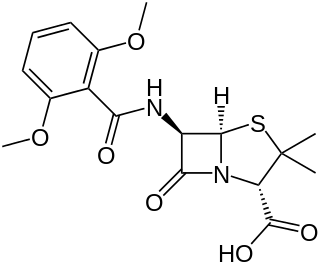 Methicillin, also known as meticillin, is a narrow-spectrum β-lactam antibiotic of the penicillin class. 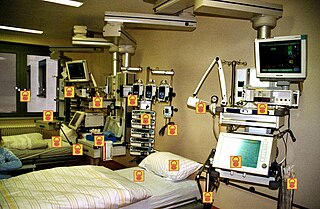 A hospital-acquired infection (HAI), also known as a nosocomial infection, is an infection that is acquired in a hospital or other health care facility. To emphasize both hospital and nonhospital settings, it is sometimes instead called a health care–associated infection. Such an infection can be acquired in hospital, nursing home, rehabilitation facility, outpatient clinic, diagnostic laboratory or other clinical settings. Infection is spread to the susceptible patient in the clinical setting by various means. Health care staff also spread infection, in addition to contaminated equipment, bed linens, or air droplets. The infection can originate from the outside environment, another infected patient, staff that may be infected, or in some cases, the source of the infection cannot be determined. In some cases the microorganism originates from the patient's own skin microbiota, becoming opportunistic after surgery or other procedures that compromise the protective skin barrier. Though the patient may have contracted the infection from their own skin, the infection is still considered nosocomial since it develops in the health care setting.

Fusidic acid is an antibiotic that is often used topically in creams and eyedrops but may also be given systemically as tablets or injections. The global problem of advancing antimicrobial resistance has led to a renewed interest in its use recently. 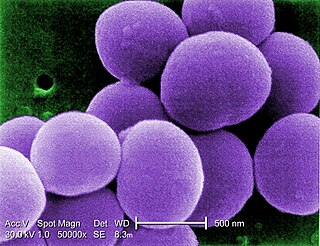 A drug of last resort (DoLR) is a pharmaceutical drug which is tried after all other drug options have failed to produce an adequate response in the patient. Drug resistance, such as antimicrobial resistance or antineoplastic resistance, may make the first-line drug ineffective, especially with multidrug-resistant pathogens or tumors. Such an alternative may be outside of extant regulatory requirements or medical best practices, in which case it may be viewed as salvage therapy.

Panton–Valentine leukocidin (PVL) is a cytotoxin—one of the β-pore-forming toxins. The presence of PVL is associated with increased virulence of certain strains (isolates) of Staphylococcus aureus. It is present in the majority of community-associated Methicillin-resistant Staphylococcus aureus (CA-MRSA) isolates studied and is the cause of necrotic lesions involving the skin or mucosa, including necrotic hemorrhagic pneumonia. PVL creates pores in the membranes of infected cells. PVL is produced from the genetic material of a bacteriophage that infects Staphylococcus aureus, making it more virulent.

Cefoxitin is a second-generation cephamycin antibiotic developed by Merck & Co., Inc. from Cephamycin C in the year following its discovery, 1972. It was synthesized in order to create an antibiotic with a broader spectrum. It is often grouped with the second-generation cephalosporins. Cefoxitin requires a prescription and as of 2010 is sold under the brand name Mefoxin by Bioniche Pharma, LLC. The generic version of Mefoxin is known as cefoxitin sodium. 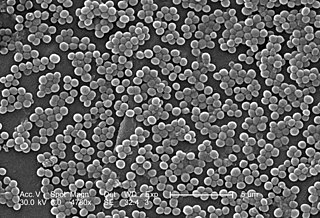 ST8:USA300 is a strain of community-associated methicillin-resistant Staphylococcus aureus (MRSA) that has emerged as a particularly antibiotic resistant epidemic that is responsible for rapidly progressive, fatal diseases including necrotizing pneumonia, severe sepsis and necrotizing fasciitis. The epidemiology of infections caused by MRSA is rapidly changing: in the past 10 years, infections caused by this organism have emerged in the community. The 2 MRSA clones in the United States most closely associated with community outbreaks, USA400 and USA300, often contain Panton-Valentine leukocidin (PVL) genes and, more frequently, have been associated with skin and soft tissue infections. Outbreaks of community-associated (CA)-MRSA infections have been reported in correctional facilities, among athletic teams, among military recruits, in newborn nurseries, and among sexually active homosexual men. CA-MRSA infections now appear to be endemic in many urban regions and cause most MRSA infections. 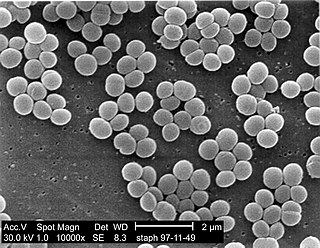 A staphylococcus infection or staph infection is an infection caused by members of the Staphylococcus genus of bacteria. These bacteria commonly inhabit the skin and nose where they are innocuous, but may enter the body through cuts or abrasions which may be nearly invisible. Once inside the body, the bacterium may spread to a number of body systems and organs, including the heart, where the toxins produced by the bacterium may cause cardiac arrest. Once the bacterium has been identified as the cause of the illness, treatment is often in the form of antibiotics and, where possible, drainage of the infected area. However, many strains of this bacterium have become antibiotic resistant; for those suffering these kinds of infection, the body's own immune system is the only defense against the disease. If that system is weakened or compromised, the disease may progress rapidly. Anyone can contract Staph, but pregnant women, children, and people with chronic diseases or who are immuno-deficient are often more susceptible to contracting an infection.

The mecA gene is a gene found in bacterial cells which allows a bacterium to be resistant to antibiotics such as methicillin, penicillin and other penicillin-like antibiotics. 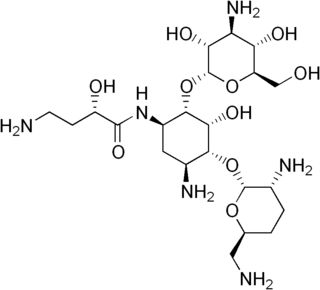 Arbekacin (INN) is a semisynthetic aminoglycoside antibiotic. It is primarily used for the treatment of infections caused by multi-resistant bacteria including methicillin-resistant Staphylococcus aureus (MRSA). Arbekacin was originally synthesized from dibekacin in 1973. It has been registered and marketed in Japan since 1990 under the trade name Habekacin. Arbekacin is no longer covered by patent and generic versions of the drug are also available under such trade names as Decontasin and Blubatosine. 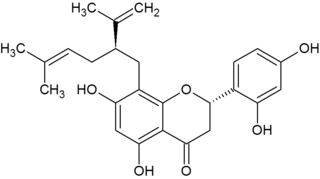 Sophoraflavanone G is a volatile phytoncide, released into the atmosphere, soil and ground water, by members of the Sophora genus. Due to an increase in the rates of antibiotic-resistant bacteria, scientific efforts have focused on finding either naturally-made or genetically modified compounds that can treat and or prevent these harmful and sometimes deadly bacteria. Sophoraflavanone G, due to its use as a phytoncide, has been found to impact the growth of antibiotic-resistant bacteria and enhance the effect of currently used antibiotics.

Anthracimycin is a polyketide antibiotic discovered in 2013. Anthracimycin is derived from marine actinobacteria. In preliminary laboratory research, it has shown activity against Bacillus anthracis, the bacteria that causes anthrax, and against methicillin-resistant Staphylococcus aureus (MRSA).

ESKAPE is an acronym encompassing the names of six bacterial pathogens commonly associated with antimicrobial resistance. ESKAPE is an acronym for their names and a reference to their ability to escape the effects of commonly used antibiotics through evolutionarily developed mechanisms.