As of 2020 [update] 18 tick-borne pathogens have been identified in the United States according to the Centers for Disease Control [5] and at least 27 are known globally. [6] [7] [8] New tick-borne diseases have been discovered in the 21st century, due in part to the use of molecular assays and next-generation sequencing. [9]

Because individual ticks can harbor more than one disease-causing agent, patients can be infected with more than one pathogen at the same time, compounding the difficulty in diagnosis and treatment. [2] As the incidence of tick-borne illnesses increases and the geographic areas in which they are found expand, health workers increasingly must be able to distinguish the diverse, and often overlapping, clinical presentations of these diseases. [5]

Ticks tend to be more active during warmer months, though this varies by geographic region and climate. Areas with woods, bushes, high grass, or leaf litter are likely to have more ticks. Those bitten commonly experience symptoms such as body aches, fever, fatigue, joint pain, or rashes. People can limit their exposure to tick bites by wearing light-colored clothing (including pants and long sleeves), using insect repellent with 20%–30% N,N-Diethyl-3-methylbenzamide (DEET), tucking their pants legs into their socks, checking for ticks frequently, and washing and drying their clothing (in a hot dryer). [12] [13]

According to the World Health Organization, tick-to-animal transmission is difficult to prevent because animals do not show visible symptoms; the only effective prevention relies on killing ticks on the livestock production facility. [14]

Ticks should be removed as soon as safely possible once discovered. They can be removed either by grasping tweezers as close to the mouth as possible and pulling without rotation; some companies market grooved tools that rotate the hypostome to facilitate removal. Chemical methods to make the tick self-detach, or trying to pull the tick out with one’s fingers, are not efficient methods. [15]

In general, specific laboratory tests are not available for rapid diagnosis of tick-borne diseases. Due to their seriousness, antibiotic treatment is often justified based on clinical presentation alone.

For a person or pet to acquire a tick-borne disease requires that the individual gets bitten by a tick and that the tick feeds for a sufficient period of time. The feeding time required to transmit pathogens differs for different ticks and different pathogens. Transmission of the bacterium that causes Lyme disease is well understood to require a substantial feeding period. [16] In general, soft ticks (Argasidae) transmit pathogens within minutes of attachment because they feed more frequently, whereas hard ticks (Ixodidae) take hours or days, but the latter are more common and harder to remove. [15]

For an individual to acquire infection, the feeding tick must also be infected. Not all ticks are infected. In most places in the US, 30-50% of deer ticks will be infected with Borrelia burgdorferi (the agent of Lyme disease). Other pathogens are much more rare. Ticks can be tested for infection using a highly specific and sensitive qPCR procedure. Several commercial labs provide this service to individuals for a fee. The Laboratory of Medical Zoology (LMZ), a nonprofit lab at the University of Massachusetts, provides a comprehensive TickReport [17] for a variety of human pathogens and makes the data available to the public. [18] Those wishing to know the incidence of tick-borne diseases in their town or state can search the LMZ surveillance database. [18]

Wikispecies has information related to Ixodida .

The Ixodidae are the family of hard ticks or scale ticks, one of the three families of ticks, consisting of over 700 species. They are known as 'hard ticks' because they have a scutum or hard shield, which the other major family of ticks, the 'soft ticks' (Argasidae), lack. They are ectoparasites of a wide range of host species, and some are vectors of pathogens that can cause human disease. 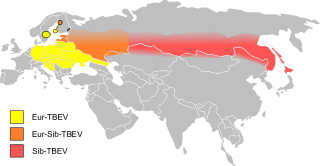 Tick-borne encephalitis (TBE) is a viral infectious disease involving the central nervous system. The disease most often manifests as meningitis, encephalitis or meningoencephalitis. Myelitis and spinal paralysis also occurs. In about one third of cases sequelae, predominantly cognitive dysfunction, persists for a year or more. 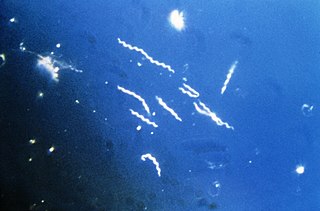 Borrelia burgdorferi is a bacterial species of the spirochete class in the genus Borrelia, and is one of the causative agents of Lyme disease in humans. Along with a few similar genospecies, some of which also cause Lyme disease, it makes up the species complex of Borrelia burgdorferi sensu lato. The complex currently comprises 20 accepted and 3 proposed genospecies. B. burgdorferi sensu stricto exists in North America and Eurasia and until 2016 was the only known cause of Lyme disease in North America. Borrelia species are Gram-negative. 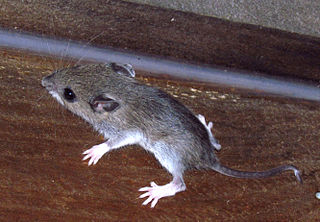 The white-footed mouse is a rodent native to North America from Ontario, Quebec, Labrador, and the Maritime Provinces to the southwestern United States and Mexico. In the Maritimes, its only location is a disjunct population in southern Nova Scotia. It is also known as the woodmouse, particularly in Texas. 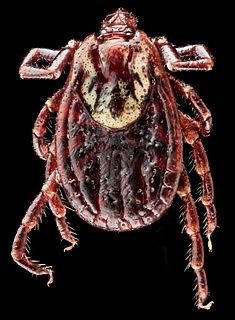 Dermacentor variabilis, also known as the American dog tick or wood tick, is a species of tick that is known to carry bacteria responsible for several diseases in humans, including Rocky Mountain spotted fever and tularemia. It is one of the best-known hard ticks. Diseases are spread when it sucks blood from the host. It may take several days for the host to experience symptoms.

Relapsing fever is a vector-borne disease caused by infection with certain bacteria in the genus Borrelia, which is transmitted through the bites of lice or soft-bodied ticks.

Powassan virus (POWV) is a Flavivirus transmitted by ticks, found in North America and in the Russian Far East. It is named after the town of Powassan, Ontario, where it was identified in a young boy who eventually died from it. It can cause encephalitis, an infection of the brain. No approved vaccine or antiviral drug exists. Prevention of tick bites is the best precaution.

Lyme disease, or borreliosis, is caused by spirochetal bacteria from the genus Borrelia, which has 52 known species. Three main species are the main causative agents of the disease in humans, while a number of others have been implicated as possibly pathogenic. Borrelia species in the species complex known to cause Lyme disease are collectively called Borrelia burgdorferisensu lato (s.l.) not to be confused with the single species in that complex Borrelia burgdorferi sensu stricto which is responsible for nearly all cases of Lyme disease in North America.

Andrew Spielman, Sc.D. was a prominent American public health entomologist and Professor of Tropical Public Health in the Department of Immunology and Infectious Disease at the Harvard School of Public Health (HSPH).

Ixodes scapularis is commonly known as the deer tick or black-legged tick, and in some parts of the US as the bear tick. It was also named Ixodes dammini until it was shown to be the same species in 1993. It is a hard-bodied tick found in the eastern and northern Midwest of the United States as well as in southeastern Canada. It is a vector for several diseases of animals, including humans and is known as the deer tick owing to its habit of parasitizing the white-tailed deer. It is also known to parasitize mice, lizards, migratory birds, etc. especially while the tick is in the larval or nymphal stage.

Powassan encephalitis, caused by the Powassan virus (POWV), a flavivirus also known as the deer tick virus, is a form of arbovirus infection that results from tick bites. It can occur as a co-infection with Lyme disease since both are transmitted to humans by the same species of tick. There has been a surge in the number of cases and geographic range in the last decade. In the United States, cases have been recorded in the northeast. The disease was first isolated from the brain of a boy who died of encephalitis in Powassan, Ontario, in 1958. The disease is a zoonosis, an animal disease, usually found in rodents and ticks, with spillover transmission to humans. The virus is antigenically related to the Far Eastern tick-borne encephalitis viruses. 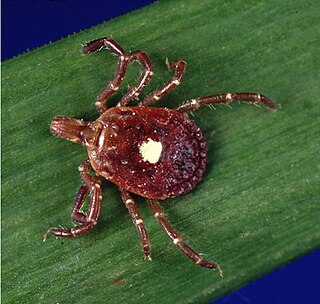 Southern tick-associated rash illness (STARI) is an emerging infectious disease related to Lyme disease that occurs in southeastern and south-central United States. It is spread by tick bites and it was hypothesized that the illness was caused by the bacteria Borrelia lonestari. However, there is insufficient evidence to declare this Borrelia strain as a causative agent. 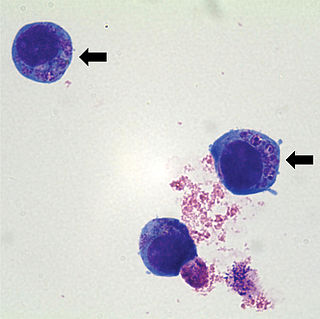 Human granulocytic anaplasmosis (HGA) is a tick-borne, infectious disease caused by Anaplasma phagocytophilum, an obligate intracellular bacterium that is typically transmitted to humans by ticks of the Ixodes ricinus species complex, including Ixodes scapularis and Ixodes pacificus in North America. These ticks also transmit Lyme disease and other tick-borne diseases.

Human monocytotropic ehrlichiosis is a form of ehrlichiosis associated with Ehrlichia chaffeensis. This bacterium is an obligate intracellular pathogen affecting monocytes and macrophages.

Deer tick virus (DTV) is a virus in the genus Flavivirus spread via ticks that causes encephalitis.

Borrelia miyamotoi is a bacterium of the spirochete phylum in the genus Borrelia. A zoonotic organism, B. miyamotoi can infect humans through the bite of several species of hard-shell Ixodes ticks, the same kind of ticks that spread B. burgdorferi, the causative bacterium of Lyme disease. Ixodes ticks are also the primary vector in the spread of babesiosis and anaplasmosis.

Ixodes persulcatus, the taiga tick, is a species of hard-bodied tick distributed from Europe through central and northern Asia to the People’s Republic of China and Japan. The sexual dimorphism of the species is marked, the male being much smaller than the female. Hosts include wild and domestic ungulates, man, dog, rabbit, and other small mammals, including the dormouse, Amur hedgehog, and occasionally birds.

Tibovirus is a term often used to describe viruses that are transmitted by tick vectors. The word tibovirus is an acronym. This falls within the superorder arthropod thus tibovirus is classified under Arthropod Borne virus (Arborvirus). For a person to acquire infection the tick must bite and feed for a sufficient period of time. The tiboviruses that affect humans are limited to within 3 families: Flaviviridae, Reoviridae, and Bunyaviridae.

Borrelia mayonii is a Gram-negative, host-associated spirochete that is capable of causing Lyme disease. This organism can infect various vertebrate and invertebrate hosts such as humans and ticks, primarily Ixodes scapularis. Migratory songbirds play a role in the dispersal of the tick vector, Ixodes scapularis, across long distances, indirectly dispersing Borrelia mayonii as well.