Amblyomma is a genus of hard ticks. Some are disease vectors, for example the Rocky Mountain spotted fever in Brazil or ehrlichiosis in the United States.

This genus is the third largest in the family Ixodidae, with its species primarily occupying the torrid zones of all the continents. The centre of species diversity is on the American continent, where half of all the species occur. On this continent, Amblyomma species reach far beyond the torrid zone, up to the 40th parallel in the Northern Hemisphere, to the 50th parallel in the Southern Hemisphere, and even reaches the alpine zone of the Andes. [1]

Ixodes is a genus of hard-bodied ticks. It includes important disease vectors of animals and humans, and some species inject toxins that can cause paralysis. Some ticks in this genus may transmit the pathogenic bacterium Borrelia burgdorferi responsible for causing Lyme disease. Additional organisms that may be transmitted by Ixodes are parasites from the genus Babesia, which cause babesiosis, and bacteria from the related genus Anaplasma, which cause anaplasmosis. 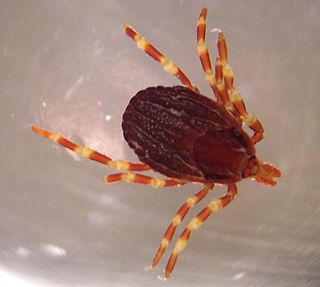 Hyalomma is a genus of hard-bodied ticks common in Asia, Europe, and North Africa. They are also found in Southern Africa. The name is derived from Greek: hyalos (ὕαλος) crystal, glass; and omma (oμμα) eye.

Dermacentor is a genus of ticks in the family Ixodidae, the hard ticks. The genus has a cosmopolitan distribution, with native species on all continents except Australia. Most occur in the Nearctic realm. 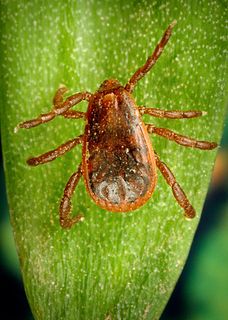 Rhipicephalus is a genus of ticks in the family Ixodidae, the hard ticks, consisting of about 74 or 75 species. Most are native to tropical Africa. 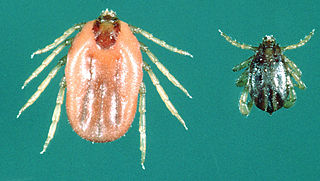 The Asian blue tick is an economically important tick that parasitises a variety of livestock species especially cattle, on which it is the most economically significant ectoparasite in the world. It is known as the Australian cattle tick, southern cattle tick, Cuban tick, Madagascar blue tick, and Porto Rican Texas fever tick. 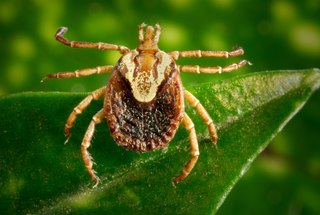 Amblyomma cajennense or Cayenne tick is a species of tick found in a range from the southern part of the United States to northern Argentina, through Central America and some of the Caribbean. 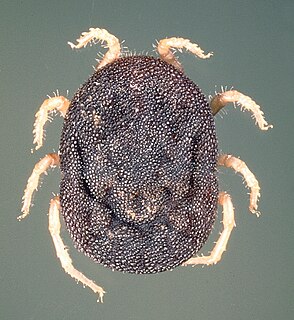 Ornithodoros is a genus in the soft-bodied tick family, Argasidae.

Argas is a genus of tick.

Haemaphysalis is a genus of ticks, containing these species:

Rhipicephalus hoogstraali is a tick found in Djibouti and Somalia. First recognized by Harry Hoogstraal as Rhipicephalus longicoxatus based on an incomplete published description, after discovery of the holotype of R. longicoxatus, it was described and named to honor Hoogstraal in 2009.

Amblyomma triguttatum, commonly known as the kangaroo tick, is a species of tick in the genus Amblyomma native to Australia. There are four subspecies, one or more of which might be separate species. The nominate subspecies is a vector for Rickettsia.

Amblyomma patinoi is a species of tick of the genus Amblyomma. The species is associated with the Eastern Cordillera of Colombia. Rickettsia species can habitate A. patinoi endosymbiotically.

Amblyomma interandinum is a species of tick of the genus Amblyomma. The species is associated with the northern part of the Inter-Andean valley of Peru. Rickettsia species can habitate A. interandinum endosymbiotically.

Amblyomma tonelliae is a species of tick of the genus Amblyomma. The species is associated with dry areas of the Chaco region, spanning central-northern Argentina to Bolivia and Paraguay. Rickettsia species can habitate A. tonelliae endosymbiotically.

The zebra tick or yellow back tick is a species of hard tick. It is common in the Horn of Africa, with a habitat of the Rift Valley and eastward. It feeds upon a wide variety of species, including livestock, wild mammals, and humans, and can be a vector for various pathogens. The adult male has a distinctive black and ivory ornamentation on its scutum.

Amblyomma albopictum is a species of tropical hard ticks in the genus Amblyomma. It is typically found parasitizing Cyclura nubila, Chilabothrus angulifer, Alsophis cantherigerus (Bibron), Leiocephalus carinatus, and less commonly the Paraguaian hairy dwarf porcupine. The species has been found in Costa Rica, Cuba, Haiti, Honduras and the Dominican Republic, and has also been reported but not confirmed in Brazil. The tick was discovered and named by Neumann in 1899. 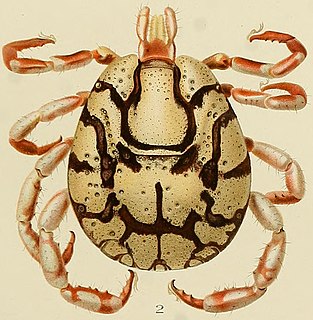 Cosmiomma is a genus of ticks first discovered by Paul Schulze in 1919. It is monospecific, being represented by the single species Cosmiomma hippopotamensis. It was first described in 1843 by Henry Denny from specimens collected from a hippopotamus in Southern Africa, and has been called "one of the most unusual, beautiful, and rare tick species known to the world."

Paul Schulze was "the most important German tick taxonomist of the early 20th century." Between 1929 and 1937, he described 19 genera, 17 subgenera, 150 species and 150 subspecies of ixodid ticks. He was essentially an amateur taxonomist, working alone for most of his career, not consulting the major tick collections or collaborating with other tick taxonomists.