A notifiable disease is any disease that is required by law to be reported to government authorities. The collation of information allows the authorities to monitor the disease, and provides early warning of possible outbreaks. In the case of livestock diseases, there may also be the legal requirement to destroy the infected livestock upon notification. Many governments have enacted regulations for reporting of both human and animal (generally livestock) diseases.

The World Health Organization's International Health Regulations 1969 require disease reporting to the organization in order to help with its global surveillance and advisory role. The current (1969) regulations are rather limited with a focus on reporting of three main diseases: cholera, yellow fever and plague. [1]

The revised International Health Regulations 2005 broadens this scope and is no longer limited to the notification of specific diseases. Whilst it does identify a number of specific diseases, it also defines a limited set of criteria to assist in deciding whether an event is notifiable to WHO. [2] [3]

WHO states that "Notification is now based on the identification within a State Party’s territory of an "event that may constitute a public health emergency of international concern". This non-disease specific definition of notifiable events expands the scope of the IHR (2005) to include any novel or evolving risk to international public health, taking into account the context in which the event occurs. Such notifiable events can extend beyond communicable diseases and arise from any origin or source. This broad notification requirement aims at detecting, early on, all public health events that could have serious and international consequences, and preventing or containing them at source through an adapted response before they spread across borders." [4]

The National Notifiable Diseases Surveillance System (NNDSS) was established in 1990. Notifications are made to the States or Territory health authority and computerised, de-identified records are then supplied to the Department of Health and Ageing for collation, analysis and publication. [5] The Australian national notifiable diseases list and case definitions are available online.

Within Australia the Department of Agriculture, Fisheries and Forestry regulates the notification of infectious animal diseases.

Notification is regulated under Brazilian Ministry of Health Ordinance number 1.271 of June 6, 2014.

The first policies of mandatory notifiable disease originated a long time ago in France, while exact times are unclear we know that at the end of the 18th century Plague was a highly enforced notifiable disease. [6]

The current list of notifiable diseases is written in the Code de la santé publique Article D3113-6 and Article D3113-7 (last revision has been made in 2012), it contains 33 diseases : 31 infectious ones and 2 non-infectious disease directly linked to the environment (Lead poisoning and Mesothelioma). Notifications of both the disease and the distribution of specific medicine are made to a regional desk governmental agency called Agence régionale de santé by :

Anonymous records are then used by the government health-insurance system.

Ill people must cure them and in many case are put in quarantine.

Only infectious diseases are notifiable to the authorities. The complete list can be found in the Article L. 223-22 du code rural, it is updated with every new entry on World Organisation for Animal Health (OIE) lists A and B and with European Union mandatory lists.

Requirement for the notification of infectious diseases originated near the end of the 19th century. The list started with a few select diseases and has since grown to 31. Currently disease notification for humans in the UK is regulated under the Public Health (Control of Disease) Act 1984 and Public Health (Infectious Diseases) Regulations 1988. The governing body is Public Health England [7] List of Notifiable Diseases can be found here .

There are also requirements for notification specific to children in the National standards for under 8s day care and childminding that state: [8]

"Office for Standards in Education should be notified of any food poisoning affecting two or more children looked after on the premises, any child having meningitis or the outbreak on the premises of any notifiable disease identified as such in the Public Health (Control of Disease) Act 1984 or because the notification requirement has been applied to them by regulations (the relevant regulations are the Public Health (Infectious Diseases) Regulations 1988).

In the UK notification of diseases in animals is regulated by the Animal Health Act 1981, as well as the Specified Diseases (Notification and Slaughter) Order 1992 (as amended) and Specified Diseases (Notification) Order 1996 (as amended). The act states that a police constable should be notified, however in practice a Defra divisional veterinary manager is notified and Defra will investigate. [9]

In the past, notifiable diseases in the United States varied according to the laws of individual states. The Centers for Disease Control and Prevention (CDC) and the Council of State and Territorial Epidemiologists (CSTE) also produced a list of nationally notifiable diseases that health officials should report to the CDC's National Notifiable Diseases Surveillance System (NNDSS). [10] A uniform criterion for reporting diseases to the NNDSS was introduced in 1990. [11]

The Animal and Plant Health Inspection Service (APHIS) is an agency of the United States Department of Agriculture (USDA) based in Riverdale, Maryland responsible for protecting animal health, animal welfare, and plant health. APHIS is the lead agency for collaboration with other agencies to protect U.S. agriculture from invasive pests and diseases. APHIS is the National Plant Protection Authority for the U.S. government, and the agency's head of veterinary services is Chief Veterinary Officer of the United States.

Glanders is a contagious zoonotic infectious disease that occurs primarily in horses, mules, and donkeys. It can be contracted by other animals, such as dogs, cats, goats and humans. It is caused by infection with the bacterium Burkholderia mallei.

The Canadian Food Inspection Agency (CFIA) is a regulatory agency that is dedicated to the safeguarding of food, plants, and animals (FPA), thus enhancing the health and well-being of Canada's people, environment and economy. The agency was created in April 1997 by the Canadian Food Inspection Agency Act for the purpose of combining and integrating the related inspection services of three separate federal government departments: Agriculture and Agri-Food Canada, Fisheries and Oceans Canada, and Health Canada. The establishment of the CFIA consolidated the delivery of all federal food safety, animal health, and plant health regulatory programs. The agency is governed by the Minister of Agriculture and Agri-Food. 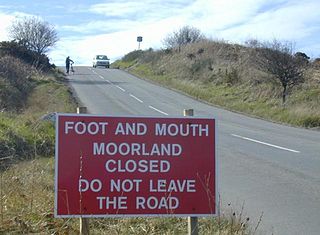 The outbreak of foot-and-mouth disease in the United Kingdom in 2001 caused a crisis in British agriculture and tourism. This epizootic saw 2,000 cases of the disease in farms across most of the British countryside. Over 6 million cows and sheep were killed in an eventually successful attempt to halt the disease. Cumbria was the worst affected area of the country, with 893 cases.

The UK statutory notification system for infectious diseases is a system whereby doctors are required to notify a "proper officer" of the local authority if they are presented with a case of a serious infectious disease such as diphtheria or measles. The proper officer then sends a report to the Centre for Infections of the Health Protection Agency (HPA) in Colindale, north London.

The Council of State and Territorial Epidemiologists (CSTE) is a 501(c)(6) non-profit organization originally organized in 1955, founded in 1992, and based in Atlanta, Georgia. CSTE works to advance public health policy and workforce capacity for applied public health epidemiologists in all localities, states, and territories in the United States.

The European Centre for Disease Prevention and Control (ECDC) is an independent agency of the European Union (EU) whose mission is to strengthen Europe's defences against infectious diseases. The Centre was established in 2004 and is located in Solna, Sweden.

The International Health Regulations (2005) are a legally binding instrument of international law that aims to a) assist countries to work together to save lives and livelihoods endangered by the international spread of diseases and other health risks and b) avoid unnecessary interference with international trade and travel.

The National Animal Health Reporting System (NAHRS) is a joint effort of the U.S. Animal Health Association (USAHA), American Association of Veterinary Laboratory Diagnosticians (AAVLD), and USDA's Animal and Plant Health Inspection Service (APHIS). NAHRS was designed to provide data from chief state animal health officials on the presence of confirmed Office International des Epizooties (OIE) LIST A and B clinical diseases in specific commercial livestock, poultry, and aquaculture species in the United States. It is intended to be one part of a comprehensive and integrated animal-health surveillance system.

A Public Health Emergency of International Concern is a formal declaration by the World Health Organization (WHO) of "an extraordinary event which is determined to constitute a public health risk to other States through the international spread of disease and to potentially require a coordinated international response", formulated when a situation arises that is "serious, sudden, unusual or unexpected", which "carries implications for public health beyond the affected state's national border" and "may require immediate international action". Under the 2005 International Health Regulations (IHR), states have a legal duty to respond promptly to a PHEIC.

The Infectious Disease (Notification) Act first appeared on the UK national statute books in 1889. It was compulsory in London and optional in the rest of the country. It later became a mandatory law with the Infectious Disease (Notification) Extension Act 1899. These acts required householders and/or general practitioners to report cases of infectious disease to the local sanitary authority. The following diseases were covered by the acts: smallpox, cholera, diphtheria, membranous croup. erysipelas, scarlatina or scarlet fever, typhus fever, typhoid fever, enteric fever, relapsing fever, continued fever and puerperal fever. Householders or general practitioners who failed to notify a case of one of these diseases was liable to a fine of up to forty shillings.

A notifiable disease is one which the law requires to be reported to government authorities.