Last updated May 16, 2021
Agriculture ministry of United Kingdom (British ministerial department)
Not to be confused with Department of Agriculture, Environment and Rural Affairs.

The Department for Environment, Food and Rural Affairs (Defra) is the government department responsible for environmental protection, food production and standards, agriculture, fisheries and rural communities in the United Kingdom of Great Britain and Northern Ireland. Concordats set out agreed frameworks for co operation, between it and the Scottish Government, [2] Welsh Government [3] and Northern Ireland Executive, [4] which have devolved responsibilities for these matters in their respective nations.

Defra also leads for the United Kingdom on agricultural, fisheries and environmental matters in international negotiations on sustainable development and climate change, although a new Department of Energy and Climate Change was created on 3 October 2008 to take over the last responsibility; later transferred to the Department for Business, Energy and Industrial Strategy following Theresa May's appointment as Prime Minister in July 2016.

The department was formed in June 2001, under the leadership of Margaret Beckett, when the Ministry of Agriculture, Fisheries and Food (MAFF) was merged with part of the Department of Environment, Transport and the Regions (DETR) and with a small part of the Home Office.

It was created after the perceived failure of MAFF, to deal adequately with an outbreak of Foot and Mouth disease. The department had about 9,000 core personnel, as of January 2008 [update] . [5]

In October 2008, the climate team at Defra was merged with the energy team from the Department for Business Enterprise and Regulatory Reform (BERR), to create the Department of Energy and Climate Change, then headed by Ed Miliband. [6]

The Permanent Secretary is Tamara Finkelstein, who replaced Clare Moriarty in 2019. [10] [11]

Some policies apply to England alone due to devolution, while others are not devolved and therefore apply to the United Kingdom as a whole.

The department's executive agencies are: [13]

The department's key delivery partners are: [16]

Defra in the English regions

Policies for environment, food and rural affairs are delivered in the regions by Defra's executive agencies and delivery bodies, in particular Natural England, the Rural Payments Agency, Animal Health and the Marine Management Organisation.

Defra's overarching aim is sustainable development, which is defined as "development which enables all people throughout the world to satisfy their basic needs and enjoy a better quality of life without compromising the quality of life of future generations." The Secretary of State wrote in a letter to the Prime Minister that he saw Defra’s mission as enabling a move toward what the World Wide Fund for Nature (WWF) has called "one planet living". [20]

Under this overarching aim, Defra has five strategic priorities: [21] 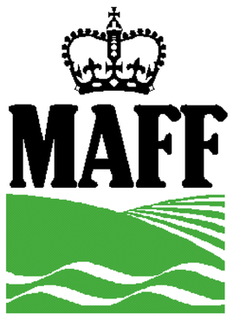 The outbreak of foot-and-mouth disease in the United Kingdom in 2001 caused a crisis in British agriculture and tourism. This epizootic saw 2,000 cases of the disease in farms across most of the British countryside. Over 6 million cows and sheep were killed in an eventually successful attempt to halt the disease. Cumbria was the worst affected area of the country, with 893 cases.

The Veterinary Medicines Directorate (VMD) is an Executive Agency of the Department for Environment, Food and Rural Affairs (Defra) seeking to protect public health, animal health, the environment and promoting animal welfare by assuring the safety, quality and efficacy of veterinary medicines in the United Kingdom.

The Central Science Laboratory (CSL) was an executive agency of the UK government branch, the Department for Environment, Food and Rural Affairs (DEFRA). It is now part of the Food and Environment Research Agency, which is in turn part of DEFRA.

The Deutsche Gesellschaft für Internationale Zusammenarbeit (GIZ) GmbH, often shortened to simply GIZ, is a German development agency headquartered in Bonn and Eschborn that provides services in the field of international development cooperation and international education work. GIZ's main commissioning party is Germany's Federal Ministry for Economic Cooperation and Development (BMZ). Other commissioners include European Union institutions, the United Nations, the private sector, and governments of other countries. In its projects GIZ works with partners in national governments, actors from the private sector, civil society and research institutions. It is the organization's self-declared goal to deliver effective solutions that offer people better prospects and sustainably improve their living conditions.

Deborah Reynolds CB served as the Chief Veterinary Officer (CVO) of the United Kingdom from March 2004 until she retired in November 2007. She is usually referred to as Debby Reynolds, or less often as Deborah Reynolds.

The National Bee Unit (NBU) runs Bee Health Programmes in England and Wales. The NBU consists of around 60 field-based Bee Inspectors and staff based in Sand Hutton, North Yorkshire.

The Marine Institute is a State agency in Ireland that provides government, public agencies and the maritime industry with a range of scientific, advisory and economic development services, aiming to inform policy-making, regulation and the sustainable management and growth of the country’s marine resources. Founded in 1991 on foot of a 1974 report, the Institute undertakes, coordinates and promotes marine research and development, which is essential to achieving a sustainable ocean economy, protecting ecosystems and inspiring a shared understanding of the ocean. The agency is governed by a ministerially-appointed board and has a professional staff, a headquarters near Galway, an office in Dublin, and two research vessels.

The Ministry of Agriculture and Rural Development is a government ministry responsible for rural development and the governance, promotion and nurturing of agriculture and the agriculture industry, in Vietnam. The purview of the Ministry includes forestry, aquaculture, irrigation and the salt industry; it is also involved in water management and flood control.

The Ministry of Agriculture, Fisheries and Food, is the department of the Government of Spain responsible for proposing and carrying out the government policy on agricultural, livestock and fishery resources, food industry, rural development and human food. The Ministry is responsible for assigning Veterinary Surgeons to carry out checks in regard to the issuing of REGA Licences a requirement for the ownership of horses on Spanish property and small holdings.

The Animal and Plant Health Agency (APHA), formerly known as the Animal Health and Veterinary Laboratories Agency (AHVLA), is an executive agency of the Department for Environment, Food and Rural Affairs (Defra) of the United Kingdom.

The Australian Department of Agriculture was an Australian Government department in existence between May 2019 and February 2020, which was responsible for developing and implementing policies and programmes that contribute to strengthening Australia's primary industries, delivering better returns for primary producers at the farm gate, protecting Australia from animal and plant pests and diseases, and improving the health of Australia's rivers and freshwater ecosystems.