Collieries were taken under government control during the First and Second World Wars. The Sankey Commission in 1919 gave R. H. Tawney, Sidney Webb and Sir Leo Chiozza Money the opportunity to advocate nationalisation, but it was rejected. [1]

Coal reserves were nationalised during the war in 1942 and placed under the control of the Coal Commission, but the mining industry remained in private hands. At the time, many coal companies were small, although some consolidation had taken place in the years before the war.

The NCB was one of a number of public corporations created by Clement Attlee's post-war Labour government to manage nationalised industries. The Coal Industry Nationalisation Act received royal assent on 12 July 1946 and the NCB was formally constituted on 15 July, with Lord Hyndley as its chairman. [2] On 1 January 1947 a notice posted at every colliery in the country read, "This colliery is now managed by the National Coal Board on behalf of the people". Opencast operations were taken over on 1 April 1952. [3]

The NCB acquired 958 collieries, the property of about 800 companies. Compensation of £164,660,000 was paid to the owners for the collieries and £78,457,000 to former owners and for other assets such as 55 coke ovens, 85 brickworks and 20 smokeless fuel plants. [3] The collieries it had acquired varied considerably in size and output. Coal was mined from seams that varied from 20 to 200 inches thick and the average pit produced 245,000 tons annually. More than a third of collieries produced less than 100,000 tons and 50 collieries produced more than 700,000 tons.

The coal board divided the country into divisions, corresponding to the major coalfields, and each division was divided into areas with an output of approximately 4 million tons. [4] [5] The board also took over power stations at some collieries and railway sidings. It managed an estate of more than 140,000 houses and more than 200,000 acres of farmland. At its inception the NCB employed nearly 800,000 workers which was four percent of Britain's total workforce. [4] Its national headquarters were established in Hobart House, London.

The formal duties of the National Coal Board (defined by Section 1 of the Coal Industry Nationalisation Act 1946) were:

(a) working and getting the coal in Great Britain, to the exclusion of any other person;

(b) securing the efficient development of the coal-mining industry; and

(c) making supplies of coal available, of such qualities and sizes, in such quantities and at such prices, as may seem to them best calculated to further the public interest in all respects, including the avoidance of any undue or unreasonable preference or advantage. [6]

In 1947, about half the collieries were in need of immediate attention [7] and a development programme was begun. Between 1947 and 1956, the NCB spent more than £550 million on major improvements and new sinkings, much of it to mechanise the coal-getting process underground and by 1957 Britain's collieries were producing cheaper coal than anywhere in Europe. The Plan for Coal produced in 1950 aimed at increasing output from 184 million to 250 million tons by 1970.

The 1974 Plan of Coal produced in the aftermath of the 1972 miners' strike envisaged that the coal industry would replace 40 million tons of obsolete capacity and ageing pits while maintaining its output. [12] By 1983, the NCB would invest £3,000 million on developing new collieries. [13]

In 1984, it was alleged that the NCB had a list of collieries earmarked for closure and its chairman, Ian MacGregor indicated that the board was looking to reduce output by 4 million tons, a contributory factor in the 1984–85 miners' strike. The strike was one of the longest and most bitter in history and caused great suffering for the striking miners. [14] During the strike, the NCB lost markets and 23 collieries had closed before the end of 1985.

On 5 March 1987, the Coal Industry Act 1987 received royal assent, signalling the end of the NCB and the formation of its successor, the British Coal Corporation.

The NCB operated extensive industrial railway systems at its collieries, employing steam traction until autumn 1982 when Bold Colliery ended regular use of steam locomotives. [15] The NCB's research establishment at Stoke Orchard in Gloucestershire was founded in 1950 with Jacob Bronowski as Director of Research. It closed following privatisation of the coal mining industry. The Stoke Orchard library was safeguarded after closure and is now held by the North of England Institute of Mining and Mechanical Engineers.

NCB subsidiaries managed coal based chemical products (Coal Products Division) and the production of helmets and other mining equipment (Tredomen Engineering Ltd). In the mid 1970s, the activities of Coal Products Division were transferred to two new companies; National Smokeless Fuels Ltd and Thomas Ness Ltd, although they remained wholly owned by the NCB.

In 1952, the NCB established a film unit. The board was keen to train its staff and new recruits and initiated a scheme to produce technical films as well as commissioning films from outside companies. More than nine hundred films were made before the unit closed in 1984. [16]

The history of coal mining goes back thousands of years, with early mines documented in ancient China, the Roman Empire and other early historical economies. It became important in the Industrial Revolution of the 19th and 20th centuries, when it was primarily used to power steam engines, heat buildings and generate electricity. Coal mining continues as an important economic activity today, but has begun to decline due to the strong contribution coal plays in global warming and environmental issues, which result in decreasing demand and in some geographies, peak coal.

Bedwas Navigation Colliery was a coal mine in the small Welsh village of Bedwas, two miles (3.2 km) north of Caerphilly. The colliery opened in 1913, and closed after the miners' strike of 1984-85.

PD Ports is a Middlesbrough, UK headquartered port, shipping and logistics company; owner of Teesport, and ports at Hartlepool, Howden and Keadby; with additional operations at the Port of Felixstowe, Port of Immingham, and Port of Hull.

The North Staffordshire Coalfield was a coalfield in Staffordshire, England, with an area of nearly 100 square miles (260 km2), virtually all of it within the city of Stoke on Trent and the borough of Newcastle-under-Lyme, apart from three smaller coalfields, Shaffalong and Goldsitch Moss Coalfields near Leek and the Cheadle Coalfield. Coal mining in North Staffordshire began early in the 13th century, but the industry grew during the Industrial Revolution when coal mined in North Staffordshire was used in the local Potteries ceramics and iron industry.

Nantgarw Colliery was a coal mine and later developed Coking coal works, located in the village on Nantgarw, Mid Glamorgan, Wales located just north of Cardiff.

The Lancashire Coalfield in North West England was an important British coalfield. Its coal seams were formed from the vegetation of tropical swampy forests in the Carboniferous period over 300 million years ago.

Tyldesley Coal Company was a coal mining company formed in 1870 in Tyldesley, on the Manchester Coalfield in the historic county of Lancashire, England that had its origins in Yew Tree Colliery, the location for a mining disaster that killed 25 men and boys in 1858. 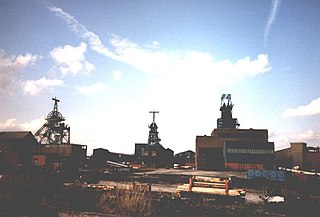 Bickershaw Colliery was a coal mine, located at Pennington, in Leigh, then within the historic county boundaries of Lancashire, England.

Parsonage Colliery was a coal mine operating on the Lancashire Coalfield in Leigh, then in the historic county of Lancashire, England. The colliery, close to the centre of Leigh and the Bolton and Leigh Railway was sunk between 1913 and 1920 by the Wigan Coal and Iron Company and the first coal was wound to the surface in 1921. For many years its shafts to the Arley mine were the deepest in the country. The pit was close to the town centre and large pillars of coal were left under the parish church and the town's large cotton mills.

The Forest of Dean Coalfield, underlying the Forest of Dean, in west Gloucestershire, is one of the smaller coalfields in the British Isles, although intensive mining during the 19th and 20th centuries has had enormous influence on the landscape, history, culture, and economy of the area. 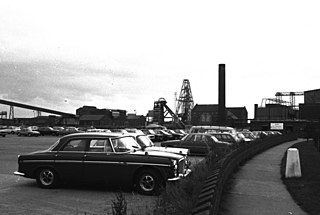 Markham Main Colliery was a coal mine in Armthorpe, on the eastern edge of Doncaster, South Yorkshire, England. It could be seen, and was a landmark, from the nearby M18. 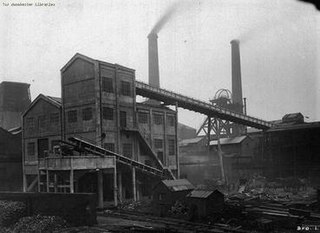 Deep Navigation Colliery was a coal mine in South Wales, that operated from 1872 until 1991.

The 1972 UK miners' strike was a major dispute over pay between the National Union of Mineworkers (NUM) and the Conservative Edward Heath government of the United Kingdom. Miners' wages had not kept pace with those of other industrial workers since 1960. The strike began on 9 January 1972 and ended on 28 February 1972, when the miners returned to work. The strike was called by the National Executive Committee of the NUM and ended when the miners accepted an improved pay offer in a ballot. It was the first time since 1926 that British miners had been on official strike, but there had been a widespread unofficial strike in 1969.

Wheldale Colliery was a coal mine located in Castleford, Yorkshire, England which produced coal for 117 years. It was accessed from Wheldon Road. 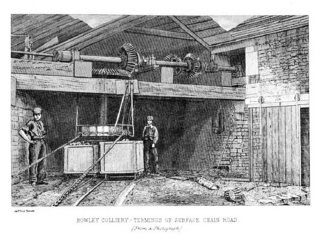 The Burnley Coalfield is the most northerly portion of the Lancashire Coalfield. Surrounding Burnley, Nelson, Blackburn and Accrington, it is separated from the larger southern part by an area of Millstone Grit that forms the Rossendale anticline. Occupying a syncline, it stretches from Blackburn past Colne to the Yorkshire border where its eastern flank is the Pennine anticline.

The Fife Coal Company was formed in 1872 to acquire the small Beath and Blairadam Colliery with its pits in Kelty. Its head office was in Leven. In addition to coal, the company worked some ironstone. For the whole of its operating life, the company was run by Charles Carlow and then his son C. Augustus Carlow. Output was expanded from an initial 70,000 tons a year to 4.3m. in 1911. Although it became the largest coal company in Scotland, Fife Coal never regained that level of output in the inter-war period. On the last day of 1946 its coal assets were nationalised.