Npower Limited [1] (trading as npower) is a British supplier of gas and electricity to homes and businesses. It is a subsidiary of E.ON UK after being acquired in January 2019. It was formerly known as Innogy plc. As Innogy plc it was listed on the London Stock Exchange and was a constituent of the FTSE 100 Index.

In March 2002, it was acquired by RWE of Germany, and was subsequently renamed RWE npower plc. RWE split off its renewable energy, network and retail divisions as Innogy SE in April 2016, and Npower transferred to the new business. It is considered as one of the Big Six energy suppliers, which dominate the gas and electricity market in the United Kingdom.

The company was established as the consumer division of Innogy plc from the operations of National Power, when the overseas operations were demerged as International Power plc in October 2000. [2]

Innogy plc then went on to purchase the regional electricity company Yorkshire Electricity in February 2001. [3] It later disposed of the distribution side of Yorkshire Electricity to CE Electric UK in exchange for the supply business of Northern Electric. [4] Innogy plc was taken over by the German energy company RWE in March 2002, and renamed RWE Npower plc with all the supply business adopting the "npower" brand. [5]

In February 2006, Npower acquired 19% of Telecom Plus, a business which now provides Npower with management services, such as billing, customer service, metering, debt collection and administration: under the deal Npower can increase its stake in Telecom Plus up to 29%. [6] In February 2009, Npower acquired Superior Plumbing, a business providing services to social housing and business customers across the United Kingdom. [7]

In November 2013, however, Npower sold the two former Telecom Plus subsidiaries back to Utility Warehouse for £218 million. [9] As a result, Utility Warehouse became one of the largest independent energy suppliers in the United Kingdom. [9] with over 500,000 customers and 770,000 gas and electricity supply points to their name. [10]

The deal also sparked commentary about the possibility of Npower's parent company RWE leaving the United Kingdom, or the emergence of a "Big Seven" in place of the existing Big Six Energy Suppliers. [11] In March 2016, the company announced losses of £106 million and 2,500 global job cuts, [12] as well as moving over 1,000 back office jobs to India, [13] along with the fact that they had lost 351,000 customers in 2015: a high level of customer complaints were cited as reasons for the issues. [14]

On 1 April 2016, RWE split off its renewable energy, network and retail businesses into the newly formed Innogy SE. Npower became a subsidiary of the new business and was renamed Npower Limited. [15] The coal, natural gas and oil-fired energy power stations, which Npower operated, are no longer part of Npower, but of RWE Generation UK plc.

In November 2017, Innogy and rival SSE announced a planned merger of Npower's residential and business retail business with SSE's residential energy supply and home services business in Great Britain to create a new company listed on the London Stock Exchange. [16] SSE plan to divest its 65.6% holding in the business to its shareholders and Innogy would own the remainder. [17] [18]

The merger received preliminary regulatory clearance from the Competition and Markets Authority on 30 August 2018, [19] and full clearance was given on 10 October 2018. [20] In December 2018, it was announced that the merger would no longer be going ahead, with both companies blaming the recent government price caps, business performance and tough market conditions. [21]

Just after the failed merger of SSE/Npower in December 2018, it was reported that the Big Six energy suppliers would still consolidate to the Big Five, as Npower would be acquired by default by E.ON UK, due to the already planned asset swap of the respective German parents Innogy and E.ON. [22] Npower announced in January 2019 that it would cut nine hundred jobs to save costs because of "an incredibly tough" retail energy market, and a government price cap. [23]

On 29 November 2019 it was announced that over 4,500 jobs would be axed at npower and the brand was to be wound down, with customers being migrated to E.ON UK as part of E.OnNext. [24] This will ultimately result in the complete closure of npower and its UK business with the Big Six becoming the Big Five.

The company supplies gas and electricity to residential and business customers in the United Kingdom. Its energy services business provides servicing such as repairing boilers and central heating systems through its Hometeam brand. [25]

Npower was eventually fined £1.8 million by the energy regulator Ofgem. [28] Npower have also been criticised for their customer service, having been rated the lowest of all energy suppliers in the Which? Switch 2010 customer satisfaction survey. [29]

In September 2013, Labour Party MPs and campaign group 38 Degrees accused Npower of avoiding tax. Npower defended itself by stating that tax paid had been lower than expected due to higher than expected capital investment in the United Kingdom, leading to capital allowances. A Bloomberg report for Greenpeace confirmed that Npower was the biggest investor in new energy infrastructure recently in the United Kingdom. [30]

In June 2014, Npower's call centre in Fenton closed, resulting in a loss of 480 jobs following the announcement of the closure the previous December. [34] In December 2015, the company was ordered to pay a £26m settlement by the energy regulator, Ofgem, for "failing to treat customers fairly", the second such fine Ofgem has imposed on it. [35] In November 2019, Npower announced that it will cut up to 4,500 jobs in the United Kingdom, to make the company more profitable. [36]

Scottish Power is a vertically integrated energy company based in Glasgow, Scotland. It is a subsidiary of Spanish utility firm Iberdrola.

Centrica plc is a British multinational energy and services company with its headquarters in Windsor, Berkshire. Its principal activity is the supply of electricity and gas to consumers in the United Kingdom and Ireland. It also provides energy solutions and trading to businesses worldwide. 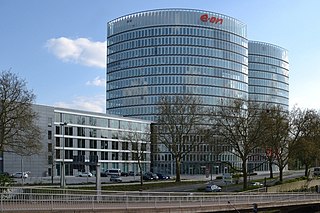 E.ON SE is a European electric utility company based in Essen, Germany. It runs one of the world's largest investor-owned electric utility service providers. The name comes from the Greek word aeon which means age. The company is a component of the Euro Stoxx 50 stock market index, DAX stock index and a member of the Dow Jones Global Titans 50 index.

RWE AG is a German multinational energy company headquartered in Essen. It generates and trades electricity in Asia-Pacific, Europe and the United States. The company is the world's number two in offshore wind power and Europe's third largest in renewable energy. In the 2020 Forbes Global 2000, RWE Group was ranked as the 297th -largest public company in the world. 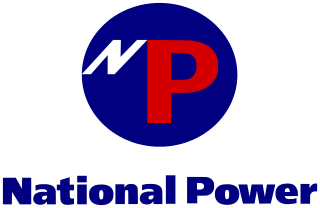 National Power was formerly an energy company based in the United Kingdom.

E.ON UK is a British energy company. E.ON UK is the largest supplier of energy and the largest supplier of renewable electricity in the UK, following its acquisition of npower. It is a subsidiary of E.ON of Germany and one of the Big Six energy suppliers. It was founded in 1989 as Powergen, and was listed on the London Stock Exchange and was once a constituent of the FTSE 100 Index. It has been a subsidiary of E.ON since 1 July 2002.

Southern Electric plc was a public limited energy company in the United Kingdom between 1990 and 1998, when it merged with Scottish Hydro-Electric plc to form Scottish and Southern Energy plc. The company had its origins in the southern England region of the British nationalised electricity industry. Created in 1948 as the Southern Electricity Board, in 1990 it was privatised by being floated on the London Stock Exchange.

Yorkshire Electricity was an electricity distribution utility in England, serving much of Yorkshire and parts of Derbyshire, Lincolnshire and Nottinghamshire.

Telecom Plus PLC is a multi-utility supplier based in the United Kingdom. It supplies gas, electricity, landline, broadband and mobile services to residences and businesses. It is listed on the London Stock Exchange and is a constituent of the FTSE 250 Index.

SSE plc is a multinational energy company headquartered in Perth, Scotland. It is listed on the London Stock Exchange, and is a constituent of the FTSE 100 Index. SSE operates in the United Kingdom and Ireland.

Greater Gabbard is a 504 MW wind farm, built on sandbanks 23 kilometres (14 mi) off the coast of Suffolk in England at a cost of £1.5 billion. It was completed on 7 September 2012 with all of the Siemens SWT3.6–107 turbines connected. Developed as a joint venture between Airtricity and Fluor, it is now jointly owned by SSE Renewables and RWE Renewables.

OVO Energy is an energy supply company based in Bristol, England. It was founded by Stephen Fitzpatrick and began trading energy in September 2009, buying and selling electricity and gas to supply domestic properties throughout the UK. By June 2017 OVO had 680,000 customers, an increase of 10,000 over the previous year, representing a 2.5% domestic market share. In November 2018, OVO Energy acquired one of its largest competitors, Spark Energy. Although at first one of over 15 smaller energy companies competing with the Big Six which dominated the market, in January 2020 OVO completed the acquisition of the retail arm of SSE, becoming itself one of the Big Six and the country's third-largest domestic energy supply company.

Extra Energy Supply Ltd was an independent retail energy supplier based in Birmingham, England. It supplied gas and electricity to domestic and small business customers. Extra Energy is part of Extra Holding, which operates in industries including telecoms, travel, insurance and energy. 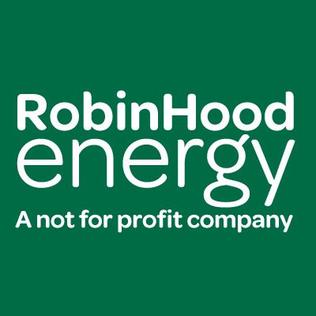 Robin Hood Energy was a not-for-profit energy company launched in September 2015 by Nottingham City Council as a competitor to the "big six" energy suppliers in the United Kingdom. The company supplied gas and electricity nationally to homes and businesses until September 2020, when its customer accounts were sold to Centrica, the parent company of British Gas.