The Water Services Regulation Authority, or Ofwat, is the body responsible for economic regulation of the privatised water and sewerage industry in England and Wales. Ofwat's main statutory duties include protecting the interests of consumers, securing the long-term resilience of water supply and wastewater systems, and ensuring that companies carry out their functions and are able to finance them. [2]

Ofwat primarily sets limits on the prices charged for water and sewerage services, taking into account proposed capital investment schemes (such as building new wastewater treatment works) and expected operational efficiency gains. The most recent review was carried out in 2014; reviews are carried out every five years, with the next due to take place in December 2019.

The Water Act 2014 extended retail competition to all non-household customers of English water companies from April 2017 and provided for possible future competition in wholesale markets. [2] Ofwat's role includes regulating such water and wastewater markets and promoting effective competition wherever appropriate. [3]

Ofwat consists of a board, plus an office of staff which carries out work delegated to them by the board.

Ofwat was set up in 1988, at the same time as 10 water authorities in England and Wales were privatised by flotation on the stock market. Its duties and powers are defined by the Water Industry Act 1991. The resulting companies are known as "water and sewerage companies"; this distinguishes them from around a dozen smaller companies which only provide water services, which were already in private hands in 1989 (having remained in private ownership since their creation in the 19th century). The water-only companies provide water to around 25% of the population in England and Wales.

The current chairman is Jonson Cox, [5] who took up his position in November 2012. The current interim chief executive (effective April 2021) is David Black, [6] replacing Rachel Fletcher who was chief executive from January 2018. [7]

A public utility company is an organization that maintains the infrastructure for a public service. Public utilities are subject to forms of public control and regulation ranging from local community-based groups to statewide government monopolies.

Severn Trent plc is a water company based in Coventry, England. It is traded on the London Stock Exchange and a constituent of the FTSE 100 Index. Severn Trent, the trading name owned by the company, applies to a group of companies employing more than 15,000 people across the United Kingdom, United States and mainland Europe, with some involvement in the Middle East. It took its name from the two predecessor River Authorities, which managed the catchment of the Severn and the Trent.

The National Rivers Authority (NRA) was one of the forerunners of the Environment Agency of England and Wales, existing between 1989 and 1996.

Dŵr Cymru Welsh Water is a not-for-profit company which supplies drinking water and wastewater services to most of Wales and parts of western England that border Wales. In total, it serves around 1.4 million households and businesses and around three million people - and supplies nearly 830 million litres of drinking water per day.

Thames Water Utilities Ltd, known as Thames Water, is a large private utility company responsible for the public water supply and waste water treatment in most of Greater London, Luton, the Thames Valley, Surrey, Gloucestershire, north Wiltshire, far west Kent, and some other parts of England; it has a considerable local monopoly. Thames Water is the UK's largest water and wastewater services company, and supplies 2.6 billion litres of drinking water per day, and treats 4.4 billion litres of wastewater per day. Thames Water's 15 million customers comprise 27% of the UK population. 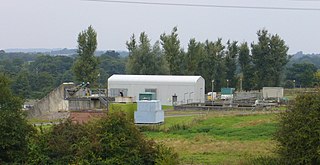 Public water supply and sanitation in the United Kingdom is characterised by universal access and generally good service quality. A salient feature of the sector in the United Kingdom compared to other developed countries is the diversity of institutional arrangements between the constituting parts of the UK, which are each described in separate articles, while this article is devoted to some common issues across the United Kingdom.

The Water Industry Act 1991 is an Act of the United Kingdom Parliament consolidating previous enactments relating to the water supply and the provision of wastewater services in England and Wales. It further implemented recommendations of the Law Commission.

The water privatisation in England and Wales involved the transfer of the provision of water and wastewater services in England and Wales from the state to the private sector in 1989, through the sale of the ten regional water authorities (RWA). The potable water supply as well as the sewerage and sewage disposal functions of each RWA were transferred to privately-owned companies.

Public water supply and sanitation in Denmark is characterized by universal access and generally good service quality. Some salient features of the sector in the Denmark compared to other developed countries are:

United Kingdom enterprise law concerns the ownership and regulation of organisations producing goods and services in the UK, European and international economy. Private enterprises are usually incorporated under the Companies Act 2006, regulated by competition law and insolvency law, while almost one third of the workforce and half of the UK economy is in enterprises subject to special regulation. Enterprise law mediates the rights and duties of investors, workers, consumers and the public to ensure efficient production, and deliver services that UK and international law sees as universal human rights. Labour, company, competition and insolvency law create general rights for stakeholders, and set a basic framework for enterprise governance, but rules of governance, competition and insolvency are altered in specific enterprises to uphold the public interest, as well as civil and social rights. Universities and schools have traditionally been publicly established, and socially regulated, to ensure universal education. The National Health Service was set up in 1946 to provide everyone with free health care, regardless of class or income, paid for by progressive taxation. The UK government controls monetary policy and regulates private banking through the publicly owned Bank of England, to complement its fiscal policy. Taxation and spending composes nearly half of total economic activity, but this has diminished since 1979.

Public water supply and sanitation in England and Wales has been characterised by universal access and generally good service quality. Salient features of the sector in the United Kingdom compared to other developed countries is the full privatisation of service provision and the pioneering of independent economic regulation in the sector in Europe. There has been a substantial increase in real tariffs between 1989 and 2005, whilst independent assessments place the cost of water provision in the UK as higher than most other major countries in the EU. The government body responsible for water regulation, together with the water companies, have claimed improvements in service quality during the same period.

A regional water authority, commonly known as a water board, was one of a group of public bodies that came into existence in England and Wales in April 1974, as a result of the passing of the Water Act 1973. This brought together in ten regional units a diverse range of bodies involved in water treatment and supply, sewage disposal, land drainage, river pollution and fisheries. They lasted until 1989, when the water industry was privatised and the water supply and sewerage and sewage disposal parts became companies and the regulatory arm formed the National Rivers Authority. Regional water authorities were also part of the Scottish water industry when three bodies covering the North, West and East of Scotland were created in 1996, to take over responsibilities for water supply and sewage treatment from the regional councils, but they only lasted until 2002, when they were replaced by the publicly owned Scottish Water.

The Water Act 1989 is an Act of the Parliament of the United Kingdom that reorganised the bodies responsible for all aspects of water within England and Wales. Whereas previous legislation, particularly the Water Act 1973, had focused on providing a single unifying body with responsibility for all water-related function within a river basin or series of river basins, this legislation divided those functions up again, with water supply, sewerage and sewage disposal being controlled by private companies, and the river management, land drainage and pollution functions becoming the responsibility of the National Rivers Authority.

An asset management plan (AMP) period is a five-year time period used in the English and Welsh water industry. It is used by the Water Services Regulation Authority to set allowable price increases for the privately owned water companies and for the assessment of many key performance indicators such as water quality and customer service. The water companies often align the frameworks they hold with contractors to the AMP periods.