United Utilities Group plc (UU), the United Kingdom's largest listed water company, was founded in 1995 as a result of the merger of North West Water and NORWEB. [2] The group manages the regulated water and waste water network in North West England, which includes Cumbria, Greater Manchester, Lancashire, Merseyside, most of Cheshire and a small area of Derbyshire, which have a combined population of more than seven million. [3] [4]

The United Utilities Group was the electricity distribution network operator for the North West until 2010, when its electricity subsidiary was sold to Electricity North West. United Utilities' headquarters are in Warrington and the company has more than 5,000 direct employees. [5] Its shares are listed on the London Stock Exchange and it is a constituent the FTSE 100 Index. [6]

North West England is the wettest region in England, [7] and water hardness across the region is soft to very soft. [8]

In 1989 the North West Water Authority, which was responsible for the provision of water to the North West of England, was privatised and became North West Water Group plc. [9] In 1995, the company acquired NORWEB plc, the then regional electricity distributor and supplier, and on 1 April 1996 changed its name to United Utilities plc. [9]

In January 1998, United Utilities listed on the New York Stock Exchange, [10] but delisted its shares in May 2007. [11] In 2000, the North West Water and NORWEB branding was phased out in favour of United Utilities, the rebranding was completed by the end of 2001. The company sold some of the businesses it had acquired, its telecoms business, Your Communications was sold in February 2006, [12] and Vertex in March 2007. [13] [14]

In October 2011, United Utilities was selected as the preferred bidder by Severn Trent Water to purchase the Lake Vyrnwy estate for £11 million. [18] United Utilities later withdrew from the bidding process. [19] In February 2012, United Utilities proposed a national water pipeline linking water sources in Manchester to London. [20] In April 2016, United Utilities received an 18-year loan of £500m from The European Investment Bank to support investment across the North West. [21]

In May 2016, the Competition & Markets Authority granted United Utilities and Severn Trent Water approval to create a new joint venture company in preparation for the water market deregulation. In June 2016, United Utilities and Severn Trent Water formed Water Plus, in readiness to provide the retail services for their non-household customers. [22]

In May 2019, the company announced the appointment of Sir David Higgins as a non-executive director and to succeed Dr John McAdam as chairman. [23]

United Utilities currently supplies water to a population of 7.3 million people across the North West. [24]

United Utilities owns some 166 water supply reservoirs, [25] various river and stream intakes, as well as lake abstractions and numerous groundwater sources, to supply the region. [26] Some reservoirs operated by the company are outside the North West such as the Longdendale Chain in Derbyshire, which were constructed by the Manchester Corporation in the 19th century, and remain networked to the North West's water supply. The principal reservoirs are as follows: [25]

On 7 August 2015, cryptosporidium, a water borne parasite that can cause diarrhoea and vomiting, had been detected in the water supply to Blackpool, Chorley, Fylde, Preston, South Ribble and Wyre [32] affecting more than 300,000 customers. [33] [34] No cases of cryptosporidiosis were reported and by introducing of ultra-violet treatment units "boil water" notices could be lifted in some areas. Initial Investigations by United Utilities and the Drinking Water Inspectorate had not identified the cause. [35] Later the root cause was identified as run-off water from agricultural land following severe rainfall. [36]

On 6 September 2015, the water supply was declared free from contamination, and restrictions were lifted. [37] United Utilities was subsequently fined £300,000 at Preston Crown Court on 10 October 2017 for supplying water unfit for human consumption, with an additional £150,000 costs. It paid around £18 million in compensation to its customers. [38] United Utilities held a number of seminars following this event to outline steps it had taken following the incident and share lessons with other water companies. [39]

Severn Trent plc is a water company based in Coventry, England. It is traded on the London Stock Exchange and a constituent of the FTSE 100 Index. Severn Trent, the trading name owned by the company, applies to a group of companies operating across the United Kingdom, United States and mainland Europe, with some involvement in the Middle East. It took its name from the two predecessor River Authorities, which managed the catchment of the Severn and the Trent. 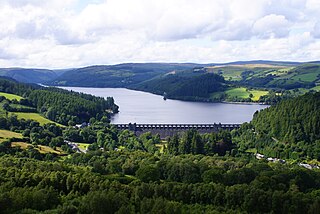 Lake Vyrnwy is a reservoir in Powys, Wales, built in the 1880s for Liverpool Corporation Waterworks to supply Liverpool with fresh water. It flooded the head of the Vyrnwy valley and submerged the village of Llanwddyn.

Norweb, originally the North Western Electricity Board, was a British electricity supply and distribution company. It supplied electricity to about 4.7 million industrial, commercial and domestic customers in the North West of England, although Merseyside and parts of Cheshire were instead covered by Manweb.

Centrica plc is a British multinational energy and services company with its headquarters in Windsor, Berkshire. Its principal activity is the supply of electricity and gas to consumers in the United Kingdom and Ireland.

Dŵr Cymru Welsh Water is a not-for-profit company which supplies drinking water and wastewater services to most of Wales and parts of western England that border Wales. In total, it serves around 1.4 million households and businesses and around three million people - and supplies nearly 830 million litres of drinking water per day.

The Clywedog Reservoir is a reservoir near Llanidloes, Wales on the head-waters of the River Severn. The construction of the reservoir was enabled by an Act of Parliament which asserted that "At certain times the flow of water in the river is inadequate ... unless that flow were regulated so as to ensure that at those times water in addition to the natural flow will flow down the river." Its primary purpose was to regulate the flow in the River Severn to mitigate flooding and provide support for drinking water abstractions for the West Midlands. It was completed in 1967 and is situated near the B4518 road north of Llanidloes, Powys.

Enterprise plc was a support services company originally based in Farington in Lancashire, England. Its core markets were local authorities and utility sectors. It has recently been integrated into Ferrovial's UK company, Amey plc.

North West Water officially came into existence in the summer of 1989 as part of the privatisation of the water industry in England and Wales. It was a water supply, sewage disposal and sewage treatment company serving North West England. It merged with NORWEB in December 1995 to form United Utilities.

Eastern Electricity plc was an electricity supply and distribution utility serving eastern England, including East Anglia and part of Greater London. It was renamed Eastern Group under which name it was listed on the London Stock Exchange and was a constituent of the FTSE 100 Index until it was acquired by Hanson plc in 1995, before being purchased by Texas Utilities in 1998.

Scottish Hydro plc was a public electricity supplier formed on 1 August 1989 after a change of name from North of Scotland Electricity plc on that date. It was listed on the London Stock Exchange and was once a constituent of the FTSE 100 Index but merged with Southern Electric in 1998.

SSE plc is a multinational energy company headquartered in Perth, Scotland. It is listed on the London Stock Exchange, and is a constituent of the FTSE 100 Index. SSE operates in the United Kingdom and Ireland. 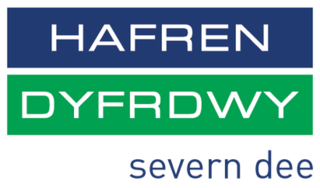 Hafren Dyfrdwy is a water company providing water and wastewater treatment services, operating in north east and mid Wales. It provides water only in Wrexham and parts of Denbighshire and Flintshire and both water and wastewater in northern Powys. It previously served north east Wales and parts of North West England as Dee Valley Water until June 2018. Its parent entity, Dee Valley Group PLC had shares listed on the FTSE Fledgling Index on the London Stock Exchange, but was purchased by Severn Trent in February 2017.