The field of social medicine seeks to implement social care through

Social medicine as a scientific field gradually began in the early 19th century, the Industrial Revolution and the subsequent increase in poverty and disease among workers raised concerns about the effect of social processes on the health of the poor. The field of social medicine is most commonly addressed today by public health efforts to understand what are known as social determinants of health.

The major emphasis on biomedical science in medical education, [1] health care, and medical research has resulted into a gap with our understanding and acknowledgement of far more important social determinants of public health and individual disease: social-economic inequalities, war, illiteracy, detrimental life-styles (smoking, obesity), discrimination because of race, gender and religion. Farmer et al. (2006) gave the following explanation for this gap: [2]

'The holy grail of modern medicine remains the search for a molecular basis of disease. While the practical yield of such circumscribed inquiry has been enormous, exclusive focus on molecular-level phenomena has contributed to the increasing "desocialization" of scientific inquiry: a tendency to ask only biological questions about what are in fact biosocial phenomena.'

They further concluded that 'Biosocial understandings of medical phenomena are urgently needed'. [2]

Social care traditionally takes a different look at issues of impairment and disability by adopting a holistic perspective on health. The social model was developed as a direct response to the medical model, the social model sees barriers (physical, attitudinal and behavioural) not just as a biomedical issue, but as caused in part by the society we live in – as a product of the physical, organizational and social worlds that lead to discrimination (Oliver 1996; French 1993; Oliver and Barnes 1993). Social care advocates equality of opportunities for vulnerable sections of society. [3]

In The Second Sickness, Howard Waitzkin traces the history of social medicine from Engels, through Virchow, through Allende. [7] Waitzkin has sought to educate North Americans about the contributions of Latin American Social Medicine. [8] [9]

In 1976, the British public health scientist and health care critic, Thomas McKeown, MD, published The role of medicine: Dream, mirage or nemesis?, wherein he summarized facts and arguments that supported what became known as the McKeown's thesis, i.e. that the growth of population can be attributed to a decline in mortality from infectious diseases, primarily thanks to better nutrition, later also to better hygiene, and only marginally and late to medical interventions such as antibiotics and vaccines. [10] McKeown was heavily criticized for his controversial ideas, but is nowadays remembered as 'the founder of social medicine'. [11]

A health system, also sometimes referred to as health care system or as healthcare system, is the organization of people, institutions, and resources that deliver health care services to meet the health needs of target populations.

In epidemiology, a risk factor is a variable associated with an increased risk of disease or infection. Determinant is often used as a synonym, due to a lack of harmonization across disciplines, in its more widely accepted scientific meaning. Determinant, specific to community health policy, is a health risk that is general, abstract, pertains to inequalities and is difficult for an individual to control. For example, low ingestion of dietary sources of vitamin C is a known risk factor for developing scurvy. Poverty, in the discipline of health policy, is a determinant of an individual's standard of health. The main difference lies in the realm of practice, clinical practice versus public health. 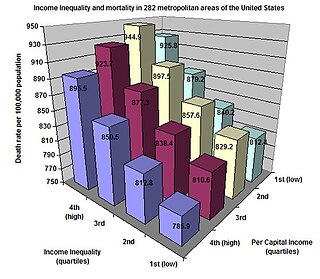 Population health has been defined as "the health outcomes of a group of individuals, including the distribution of such outcomes within the group". According to Akarowhe (2018), the working definition of population health is expressed thus; population health is an art, process, science and a product of enhancing the health condition of a specific number of people within a given geographical area - population health as an art, simply means that it is geared towards equal health care delivery to an anticipated group of people in a particular geographical location; as a science, it implies that it adopt scientific approach of preventive, therapeutic, and diagnostic service in proffering medical treatment to the health problem of people; as a product, it means that population health is directed toward overall health performance of people through health satisfaction within the said geographical area; and as a process it entails effective and efficient running of a health management/population health management system to cater for the health needs of the people. It is an approach to health that aims to improve the health of an entire human population. This concept does not refer to animal or plant populations. It has been described as consisting of three components. These are "health outcomes, patterns of health determinants, and policies and interventions". A priority considered important in achieving the aim of Population Health is to reduce health inequities or disparities among different population groups due to, among other factors, the social determinants of health, SDOH. The SDOH include all the factors that the different populations are born into, grow up and function with throughout their lifetimes which potentially have a measurable impact on the health of human populations. The Population Health concept represents a change in the focus from the individual-level, characteristic of most mainstream medicine. It also seeks to complement the classic efforts of public health agencies by addressing a broader range of factors shown to impact the health of different populations. The World Health Organization's Commission on Social Determinants of Health, reported in 2008, that the SDOH factors were responsible for the bulk of diseases and injuries and these were the major causes of health inequities in all countries. In the US, SDOH were estimated to account for 70% of avoidable mortality. 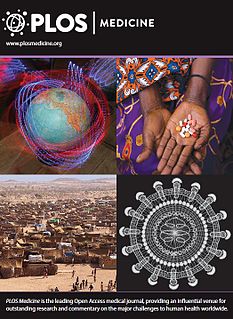 PLOS Medicine is a peer-reviewed weekly medical journal covering the full spectrum of the medical sciences. It began operation on October 19, 2004, as the second journal of the Public Library of Science (PLOS), a non-profit open access publisher. All content in PLOS Medicine is published under the Creative Commons "by-attribution" license. To fund the journal, the publication's business model requires in most cases that authors pay publication fees. The journal was published online and in a printed format until 2005 and is now only published online. The journal's acting chief editor is Clare Stone, who replaced the previous chief editor, Larry Peiperl, in 2018.

Disease mongering is a term for the practice of widening the diagnostic boundaries of illnesses and aggressively promoting their public awareness in order to expand the markets for treatment. Among the entities benefiting from selling and delivering treatments are pharmaceutical companies, physicians, alternative practitioners and other professional or consumer organizations. It is distinct from the promulgation of bogus or unrecognised diagnoses. 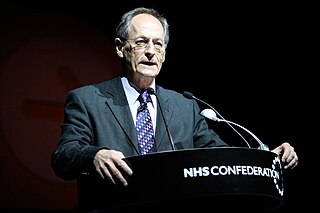 Sir Michael Gideon Marmot, FBA, FMedSci, FRCP is Professor of Epidemiology and Public Health at University College London. He is currently the Director of The UCL Institute of Health Equity.

The social determinants of health are the economic and social conditions that influence individual and group differences in health status. They are the health promoting factors found in one's living and working conditions, rather than individual risk factors that influence the risk for a disease, or vulnerability to disease or injury. The distributions of social determinants are often shaped by public policies that reflect prevailing political ideologies of the area. The World Health Organization says, "This unequal distribution of health-damaging experiences is not in any sense a 'natural' phenomenon but is the result of a toxic combination of poor social policies, unfair economic arrangements [where the already well-off and healthy become even richer and the poor who are already more likely to be ill become even poorer], and bad politics."

Race and health refers to how being identified with a specific race influences health. Race is a complex concept that changes across time and space and that depends on both self-identification and social recognition. In the study of race and health, scientists organize people in racial categories depending on different factors such as: phenotype, ancestry, social identity, genetic makeup and lived experience. “Race” and ethnicity often remain undifferentiated in health research.

Deficient sanitation systems, poor nutrition, and inadequate health services have pushed Haiti to the bottom of the World Bank’s rankings of health indicators. According to the United Nations World Food Programme, 80 percent of Haiti’s population lives below the poverty line. In fact, 75% of the Haitian population lives off of $2.50 per day. Consequently, malnutrition is a significant problem. Half the population can be categorized as "food insecure," and half of all Haitian children are undersized as a result of malnutrition. Less than half the population has access to clean drinking water, a rate that compares poorly even with other less-developed nations. Haiti's healthy life expectancy at birth is 63 years. The World Health Organization (WHO) estimates that only 43 percent of the target population receives the recommended immunizations.

The Nuffield Trust, formerly the Nuffield Provincial Hospitals Trust, is a charitable trust with the mission of improving health care in the UK through evidence and analysis.

Research on race and health in the United States shows many health disparities between the different racial/ethnic groups. Different outcomes in mental and physical health exist between all census-recognized racial groups, but these differences stem from different historical and current factors, including genetics, socioeconomic factors, and racism. Research has demonstrated that numerous health care professionals show "implicit bias" in the way that they treat patients.

PharmedOut (PhO) is a Georgetown University Medical Center project founded in 2006. It is directed by Adriane Fugh-Berman. The stated mission of the organization is to advance evidence-based prescribing and educate healthcare professionals about pharmaceutical marketing practices. Stated goals are to: 1. Document and disseminate information about how pharmaceutical companies influence prescribing 2. Foster access to unbiased information about drugs and 3. Encourage physicians to choose pharma-free CME.

The social determinants of health in poverty describe the factors that affect impoverished populations' health and health inequality. Inequalities in health stem from the conditions of people's lives, including living conditions, work environment, age, and other social factors, and how these affect people's ability to respond to illness. These conditions are also shaped by political, social, and economic structures. The majority of people around the globe do not meet their potential best health because of a "toxic combination of bad policies, economics, and politics". Daily living conditions work together with these structural drivers to result in the social determinants of health.

Thomas McKeown (1912–1988) was a British physician, epidemiologist and historian of medicine. Largely based on demographic data from England and Wales, McKeown argued that the population growth since the late eighteenth century was due to improving economic conditions, i.e. better nutrition, rather than to better hygiene, public health measures and improved medicine. This became known as the "McKeown thesis".

Rüdiger Krech is a German public health expert who currently works as a senior official at the World Health Organization (WHO). An advocate for universal health coverage, social determinants of health, Health in All Policies and social protection, he is the Director of Health Systems and Innovation at the Office of the Assistant Director-General at the organization.

Social Emergency Medicine is an emerging branch of Emergency Medicine that explores the interplay of social forces and the emergency care system, and how these act together to affect the health of individuals and their communities. Organized in 2009, the field has gained wider acceptance within the larger specialty of emergency medicine. Initiatives in social emergency medicine include research, direct service and advocacy aimed at addressing the social determinants of health.