A biological hazard, or biohazard, is a biological substance that poses a threat to the health of living organisms, primarily humans. This could include a sample of a microorganism, virus or toxin that can adversely affect human health. A biohazard could also be a substance harmful to other animals. [upper-alpha 1]

The term and its associated symbol are generally used as a warning, so that those potentially exposed to the substances will know to take precautions. The biohazard symbol was developed in 1966 by Charles Baldwin, an environmental-health engineer working for the Dow Chemical Company on the containment products. [1]

It is used in the labeling of biological materials that carry a significant health risk, including viral samples and used hypodermic needles.

Bio hazardous agents are classified for transportation by UN number: [2]

The United States Centers for Disease Control and Prevention (CDC) categorizes various diseases in levels of biohazard, Level 1 being minimum risk and Level 4 being extreme risk. Laboratories and other facilities are categorized as BSL (Biosafety Level) 1–4 or as P1 through P4 for short (Pathogen or Protection Level).

For broader coverage of this topic, see Hazard symbol.

The biohazard symbol was developed by the Dow Chemical Company in 1966 for their containment products. [1] According to Charles Baldwin, [1] an environmental-health engineer who contributed to its development: "We wanted something that was memorable but meaningless, so we could educate people as to what it means." In an article he wrote for Science in 1967, [4] the symbol was presented as the new standard for all biological hazards ("biohazards"). The article explained that over 40 symbols were drawn up by Dow artists, and all of the symbols investigated had to meet a number of criteria:

The chosen symbol scored the best on nationwide testing for memorability. [5]

The design was first specified in 39 FR 23680 but was dropped in the succeeding amendment. However, various US states adopted the specification for their state code. [6] 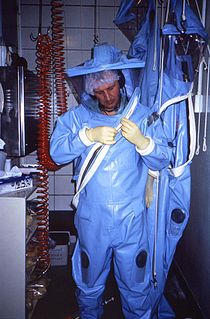 Biosafety is the prevention of large-scale loss of biological integrity, focusing both on ecology and human health. These prevention mechanisms include conduction of regular reviews of the biosafety in laboratory settings, as well as strict guidelines to follow. Biosafety is used to protect from harmful incidents. Many laboratories handling biohazards employ an ongoing risk management assessment and enforcement process for biosafety. Failures to follow such protocols can lead to increased risk of exposure to biohazards or pathogens. Human error and poor technique contribute to unnecessary exposure and compromise the best safeguards set into place for protection.

Biosecurity is set of measures aimed at preventing the introduction and/or spread of harmful organisms, in order to minimise the risk of transmission of infectious diseases to people, animals and plants caused by viruses, bacteria or other microorganisms. In agriculture, it aims to protect food crops and livestock by keeping pests, invasive species and other organisms which may harm the welfare of the human population. The term includes biological threats to people, including from pandemic diseases and bioterrorism. The definition has sometimes been broadened to embrace other concepts, and it is used for different purposes in different contexts.

A biosafety level (BSL), or pathogen/protection level, is a set of biocontainment precautions required to isolate dangerous biological agents in an enclosed laboratory facility. The levels of containment range from the lowest biosafety level 1 (BSL-1) to the highest at level 4 (BSL-4). In the United States, the Centers for Disease Control and Prevention (CDC) have specified these levels. In the European Union, the same biosafety levels are defined in a directive. In Canada the four levels are known as Containment Levels. Facilities with these designations are also sometimes given as P1 through P4, as in the term P3 laboratory. 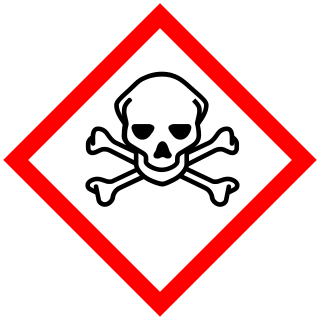 A biological agent is a bacterium, virus, protozoan, parasite, or fungus that can be used purposefully as a weapon in bioterrorism or biological warfare (BW). In addition to these living or replicating pathogens, toxins and biotoxins are also included among the bio-agents. More than 1,200 different kinds of potentially weaponizable bio-agents have been described and studied to date. 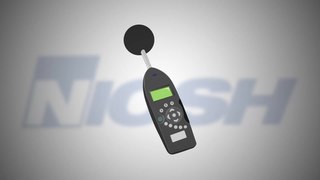 A chemical hazard is a type of occupational hazard caused by exposure to chemicals in the workplace. Exposure to chemicals in the workplace can cause acute or long-term detrimental health effects. There are many types of hazardous chemicals, including neurotoxins, immune agents, dermatologic agents, carcinogens, reproductive toxins, systemic toxins, asthmagens, pneumoconiotic agents, and sensitizers. These hazards can cause physical and/or health risks. Depending on chemical, the hazards involved may be varied, thus it is important to know and apply the PPE especially during the lab. 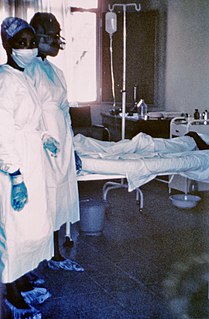 The National Microbiology Laboratory (NML) is part of the Infectious Disease Prevention and Control Branch of the Public Health Agency of Canada (PHAC), the agency of the Government of Canada that is responsible for public health, health emergency preparedness and response, and infectious and chronic disease control and prevention.

The United States Army Medical Research Institute of Infectious Diseases is the U.S Army's main institution and facility for defensive research into countermeasures against biological warfare. It is located on Fort Detrick, Maryland and is a subordinate lab of the U.S. Army Medical Research and Development Command (USAMRDC), headquartered on the same installation. 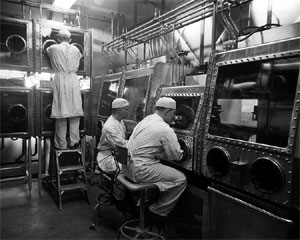 One use of the concept of biocontainment is related to laboratory biosafety and pertains to microbiology laboratories in which the physical containment of pathogenic organisms or agents is required, usually by isolation in environmentally and biologically secure cabinets or rooms, to prevent accidental infection of workers or release into the surrounding community during scientific research.

Crime scene cleanup is a term applied to forensic cleanup of blood, bodily fluids, and other potentially infectious materials (OPIM). It is also referred to as biohazard remediation, and forensic cleanup, because crime scenes are only a portion of the situations in which biohazard cleaning is needed. Incidents which may require this type of cleanup include accidents, suicide, homicides, and decomposition after unattended death, as well as mass trauma, industrial accidents, infectious disease contamination, animal biohazard contamination or regulated waste transport, treatment, and disposal.

A hazard is an agent which has the potential to cause harm to a vulnerable target. Hazards can be both natural or human induced. Sometimes natural hazards such as floods and drought can be caused by human activity. Floods can be caused by bad drainage facilities and droughts can be caused by over-irrigation or groundwater pollution. The terms "hazard" and "risk" are often used interchangeably however, in terms of risk assessment, they are two very distinct terms. A hazard is any agent that can cause harm or damage to humans, property, or the environment. Risk is defined as the probability that exposure to a hazard will lead to a negative consequence, or more simply, a hazard poses no risk if there is no exposure to that hazard. 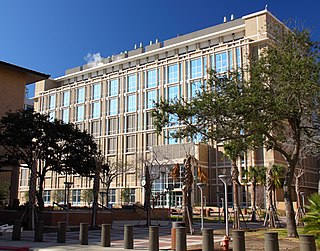 The Galveston National Laboratory (GNL) in Galveston, Texas, United States, is a high security National Biocontainment Laboratory housing several Biosafety level 4 research laboratories. The lab is run by the University of Texas Medical Branch (UTMB) for exotic disease diagnosis and research. The GNL is one of the 15 biosecurity level 4 facilities in the United States and the largest one in the world located on an academic campus.

Ravn virus is a close relative of the much more commonly known Marburg virus (MARV). RAVV causes Marburg virus disease in humans and nonhuman primates, a form of viral hemorrhagic fever. RAVV is a Select agent, World Health Organization Risk Group 4 Pathogen, National Institutes of Health/National Institute of Allergy and Infectious Diseases Category A Priority Pathogen, Centers for Disease Control and Prevention Category A Bioterrorism Agent, and listed as a Biological Agent for Export Control by the Australia Group. 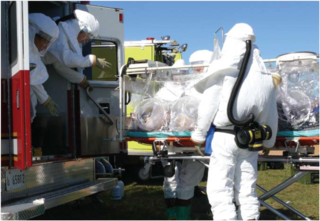 The Aeromedical Isolation Team of the US Army Medical Research Institute of Infectious Diseases (USAMRIID) at Fort Detrick, Maryland was a military rapid response team with worldwide airlift capability designed to safely evacuate and manage contagious patients under high-level (BSL-4) bio-containment conditions. Created in 1978, during its final years the AIT was one of MEDCOM’s Special Medical Augmentation Response Teams comprising a portable containment laboratory along with its transit isolators for patient transport. Contingency missions included bioterrorism scenarios as well as the extraction of scientists with exotic infections from remote sites in foreign countries. The AIT trained continuously and was often put on alert status, but only deployed for “real world” missions four times. The AIT was decommissioned in 2010 and its mission assumed by one of the US Air Force’s Critical Care Air Transport Teams (CCATTs).

The United States biological defense program—in recent years also called the National Biodefense Strategy— refers to the collective effort by all levels of government, along with private enterprise and other stakeholders, in the United States to carry out biodefense activities.

Many laboratories contain significant risks, and the prevention of laboratory accidents requires great care and constant vigilance. Examples of risk factors include high voltages, high and low pressures and temperatures, corrosive and toxic chemicals and chemical vapours, radiation, fire, explosions, and biohazards including infective organisms and their toxins. 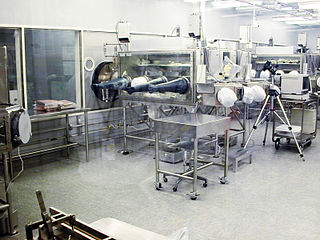 The curation of extraterrestrial samples (astromaterials) obtained by sample-return missions take place at facilities specially designed to preserve both the sample integrity and protect the Earth. Astromaterials are classified as either non-restricted or restricted, depending on the nature of the Solar System body. Non-restricted samples include the Moon, asteroids, comets, solar particles and space dust. Restricted bodies include planets or moons suspected to have either past or present habitable environments to microscopic life, and therefore must be treated as extremely biohazardous.