Clinical study design is the formulation of trials and experiments, as well as observational studies in medical, clinical and other types of research (e.g., epidemiological) involving human beings. [1] The goal of a clinical study is to assess the safety, efficacy, and / or the mechanism of action of an investigational medicinal product (IMP) [2] or procedure, or new drug or device that is in development, but potentially not yet approved by a health authority (e.g. Food and Drug Administration). [3] It can also be to investigate a drug, device or procedure that has already been approved but is still in need of further investigation, typically with respect to long-term effects or cost-effectiveness. [4]

Some of the considerations here are shared under the more general topic of design of experiments but there can be others, in particular related to patient confidentiality and ethics.

Outline of types of designs for clinical studies

When choosing a study design, many factors must be taken into account. Different types of studies are subject to different types of bias. For example, recall bias is likely to occur in cross-sectional or case-control studies where subjects are asked to recall exposure to risk factors. Subjects with the relevant condition (e.g. breast cancer) may be more likely to recall the relevant exposures that they had undergone (e.g. hormone replacement therapy) than subjects who don't have the condition.

The ecological fallacy may occur when conclusions about individuals are drawn from analyses conducted on grouped data. The nature of this type of analysis tends to overestimate the degree of association between variables.

Conducting studies in seasonal indications (such as allergies, Seasonal Affective Disorder, influenza, and others) can complicate a trial as patients must be enrolled quickly. Additionally, seasonal variations and weather patterns can affect a seasonal study. [15] [16] 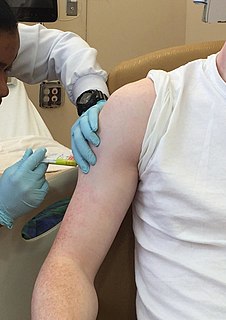 Clinical trials are experiments or observations done in clinical research. Such prospective biomedical or behavioral research studies on human participants are designed to answer specific questions about biomedical or behavioral interventions, including new treatments and known interventions that warrant further study and comparison. Clinical trials generate data on dosage, safety and efficacy. They are conducted only after they have received health authority/ethics committee approval in the country where approval of the therapy is sought. These authorities are responsible for vetting the risk/benefit ratio of the trial—their approval does not mean the therapy is 'safe' or effective, only that the trial may be conducted.

A case–control study is a type of observational study in which two existing groups differing in outcome are identified and compared on the basis of some supposed causal attribute. Case–control studies are often used to identify factors that may contribute to a medical condition by comparing subjects who have that condition/disease with patients who do not have the condition/disease but are otherwise similar. They require fewer resources but provide less evidence for causal inference than a randomized controlled trial. A case–control study produces only an odds ratio, which is an inferior measure of strength of association compared to relative risk.

A hierarchy of evidence is a heuristic used to rank the relative strength of results obtained from scientific research. There is broad agreement on the relative strength of large-scale, epidemiological studies. More than 80 different hierarchies have been proposed for assessing medical evidence. The design of the study and the endpoints measured affect the strength of the evidence. In clinical research, the best evidence for treatment efficacy is mainly from meta-analyses of randomized controlled trials (RCTs). Systematic reviews of completed, high-quality randomized controlled trials – such as those published by the Cochrane Collaboration rank the same as systematic review of completed high-quality observational studies in regard to the study of side effects. Evidence hierarchies are often applied in evidence-based practices and are integral to evidence-based medicine (EBM).

In medicine an intention-to-treat (ITT) analysis of the results of an experiment is based on the initial treatment assignment and not on the treatment eventually received. ITT analysis is intended to avoid various misleading artifacts that can arise in intervention research such as non-random attrition of participants from the study or crossover. ITT is also simpler than other forms of study design and analysis, because it does not require observation of compliance status for units assigned to different treatments or incorporation of compliance into the analysis. Although ITT analysis is widely employed in published clinical trials, it can be incorrectly described and there are some issues with its application. Furthermore, there is no consensus on how to carry out an ITT analysis in the presence of missing outcome data.

A case series is a type of medical research study that tracks subjects with a known exposure, such as patients who have received a similar treatment, or examines their medical records for exposure and outcome. Case series may be consecutive or non-consecutive, depending on whether all cases presenting to the reporting authors over a period were included, or only a selection. When information on more than three patients is included, the case series is considered to be a systematic investigation designed to contribute to generalizable knowledge, and therefore submission is required to an institutional review board (IRB). Case series usually contain demographic information about the patient(s), for example, age, gender, ethnic origin. etc.

Progression-free survival (PFS) is "the length of time during and after the treatment of a disease, such as cancer, that a patient lives with the disease but it does not get worse". In oncology, PFS usually refers to situations in which a tumor is present, as demonstrated by laboratory testing, radiologic testing, or clinically. Similarly, "disease-free survival" is the length of time after patients have received treatment and have no detectable disease.

A prospective cohort study is a longitudinal cohort study that follows over time a group of similar individuals (cohorts) who differ with respect to certain factors under study, to determine how these factors affect rates of a certain outcome. For example, one might follow a cohort of middle-aged truck drivers who vary in terms of smoking habits, to test the hypothesis that the 20-year incidence rate of lung cancer will be highest among heavy smokers, followed by moderate smokers, and then nonsmokers.

An N of 1 trial is a clinical trial in which a single patient is the entire trial, a single case study. A trial in which random allocation can be used to determine the order in which an experimental and a control intervention are given to a patient is an N of 1 randomized controlled trial. The order of experimental and control interventions can also be fixed by the researcher.

The phases of clinical research are the stages in which scientists conduct experiments with a health intervention to obtain sufficient evidence for a process considered effective as a medical treatment. For drug development, the clinical phases start with testing for safety in a few human subjects, then expand to many study participants to determine if the treatment is effective. Clinical research is conducted on drug candidates, vaccine candidates, new medical devices, and new diagnostic assays.

Tucatinib, sold under the brand name Tukysa, is a small molecule inhibitor of HER2 for the treatment of HER2-positive breast cancer. It was developed by Array BioPharma and licensed to Cascadian Therapeutics.