Isotonic regression has applications in statistical inference. For example, one might use it to fit an isotonic curve to the means of some set of experimental results when an increase in those means according to some particular ordering is expected. A benefit of isotonic regression is that it is not constrained by any functional form, such as the linearity imposed by linear regression, as long as the function is monotonic increasing.

Isotonic regression for the simply ordered case with univariate

has been applied to estimating continuous dose-response relationships in fields such as anesthesiology and toxicology. Narrowly speaking, isotonic regression only provides point estimates at observed values of

Estimation of the complete dose-response curve without any additional assumptions is usually done via linear interpolation between the point estimates. [3]

Software for computing isotone (monotonic) regression has been developed for R, [4] [5] Stata, and Python. [6]

be a given set of observations, where the

fall in some partially ordered set. For generality, each observation

may be given a weight

, subject to the constraint that

. This gives the following quadratic program (QP) in the variables

specifies the partial ordering of the observed inputs

). Problems of this form may be solved by generic quadratic programming techniques.

In the usual setting where the

values fall in a totally ordered set such as

, we may assume WLOG that the observations have been sorted so that

. In this case, a simple iterative algorithm for solving the quadratic program is the pool adjacent violators algorithm. Conversely, Best and Chakravarti [7] studied the problem as an active set identification problem, and proposed a primal algorithm. These two algorithms can be seen as each other's dual, and both have a computational complexity of

To complete the isotonic regression task, we may then choose any non-decreasing function

for all i. Any such function obviously solves

and can be used to predict the

values for new values of

. A common choice when

would be to interpolate linearly between the points

, as illustrated in the figure, yielding a continuous piecewise linear function:

As this article's first figure shows, in the presence of monotonicity violations the resulting interpolated curve will have flat (constant) intervals. In dose-response applications it is usually known that

is not only monotone but also smooth. The flat intervals are incompatible with

's assumed shape, and can be shown to be biased. A simple improvement for such applications, named centered isotonic regression (CIR), was developed by Oron and Flournoy and shown to substantially reduce estimation error for both dose-response and dose-finding applications. [8] Both CIR and the standard isotonic regression for the univariate, simply ordered case, are implemented in the R package "cir". [4] This package also provides analytical confidence-interval estimates.

Supervised learning is the machine learning task of learning a function that maps an input to an output based on example input-output pairs. It infers a function from labeled training data consisting of a set of training examples. In supervised learning, each example is a pair consisting of an input object and a desired output value. A supervised learning algorithm analyzes the training data and produces an inferred function, which can be used for mapping new examples. An optimal scenario will allow for the algorithm to correctly determine the class labels for unseen instances. This requires the learning algorithm to generalize from the training data to unseen situations in a "reasonable" way. This statistical quality of an algorithm is measured through the so-called generalization error.

In machine learning, support-vector machines are supervised learning models with associated learning algorithms that analyze data for classification and regression analysis. Developed at AT&T Bell Laboratories by Vladimir Vapnik with colleagues, SVMs are one of the most robust prediction methods, being based on statistical learning frameworks or VC theory proposed by Vapnik and Chervonenkis (1974) and Vapnik. Given a set of training examples, each marked as belonging to one of two categories, an SVM training algorithm builds a model that assigns new examples to one category or the other, making it a non-probabilistic binary linear classifier. An SVM maps training examples to points in space so as to maximise the width of the gap between the two categories. New examples are then mapped into that same space and predicted to belong to a category based on which side of the gap they fall.

Stochastic gradient descent is an iterative method for optimizing an objective function with suitable smoothness properties. It can be regarded as a stochastic approximation of gradient descent optimization, since it replaces the actual gradient by an estimate thereof. Especially in high-dimensional optimization problems this reduces the computational burden, achieving faster iterations in trade for a lower convergence rate.

Random forests or random decision forests are an ensemble learning method for classification, regression and other tasks that operate by constructing a multitude of decision trees at training time and outputting the class that is the mode of the classes (classification) or mean/average prediction (regression) of the individual trees. Random decision forests correct for decision trees' habit of overfitting to their training set. Random forests generally outperform decision trees, but their accuracy is lower than gradient boosted trees. However, data characteristics can affect their performance. 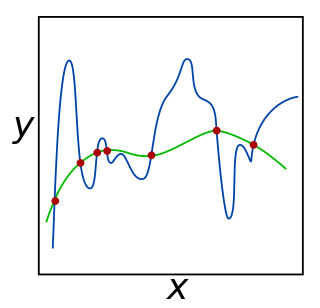 In mathematics, statistics, finance, computer science, particularly in machine learning and inverse problems, regularization is the process of adding information in order to solve an ill-posed problem or to prevent overfitting.

A kernel smoother is a statistical technique to estimate a real valued function as the weighted average of neighboring observed data. The weight is defined by the kernel, such that closer points are given higher weights. The estimated function is smooth, and the level of smoothness is set by a single parameter.

Sliced inverse regression (SIR) is a tool for dimension reduction in the field of multivariate statistics.

Gradient boosting is a machine learning technique for regression and classification problems, which produces a prediction model in the form of an ensemble of weak prediction models, typically decision trees. When a decision tree is the weak learner, the resulting algorithm is called gradient boosted trees, which usually outperforms random forest. It builds the model in a stage-wise fashion like other boosting methods do, and it generalizes them by allowing optimization of an arbitrary differentiable loss function. 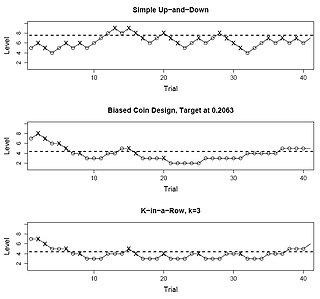