Seasonal adjustment or deseasonalization is a statistical method for removing the seasonal component of a time series. It is usually done when wanting to analyse the trend, and cyclical deviations from trend, of a time series independently of the seasonal components. Many economic phenomena have seasonal cycles, such as agricultural production, (crop yields fluctuate with the seasons) and consumer consumption (increased personal spending leading up to Christmas). It is necessary to adjust for this component in order to understand underlying trends in the economy, so official statistics are often adjusted to remove seasonal components. [1] Typically, seasonally adjusted data is reported for unemployment rates to reveal the underlying trends and cycles in labor markets. [2] [3]

The investigation of many economic time series becomes problematic due to seasonal fluctuations. Time series are made up of four components:

The difference between seasonal and cyclic patterns:

The relation between decomposition of time series components

Each group provides software supporting their methods. Some versions are also included as parts of larger products, and some are commercially available. For example, SAS includes X-12-ARIMA, while Oxmetrics includes STAMP. A recent move by public organisations to harmonise seasonal adjustment practices has resulted in the development of Demetra+ by Eurostat and National Bank of Belgium which currently includes both X-12-ARIMA and TRAMO/SEATS. [10] R includes STL decomposition. [11] The X-12-ARIMA method can be utilized via the R package "X12". [12] EViews supports X-12, X-13, Tramo/Seats, STL and MoveReg.

When seasonal adjustment is not performed with monthly data, year-on-year changes are utilised in an attempt to avoid contamination with seasonality.

Use of seasonally adjusted data in regressions

Since seasonal adjustment introduces a "non-revertible" moving average (MA) component into time series data, unit root tests (such as the Phillips–Perron test) will be biased towards non-rejection of the unit root null. [17] 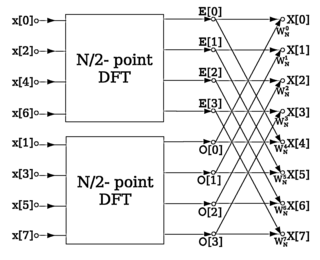 In mathematics, functional decomposition is the process of resolving a functional relationship into its constituent parts in such a way that the original function can be reconstructed from those parts by function composition.

Multiplication is one of the four elementary mathematical operations of arithmetic, with the other ones being addition, subtraction and division. The result of a multiplication operation is called a product.

Forecasting is the process of making predictions based on past and present data and most commonly by analysis of trends. A commonplace example might be estimation of some variable of interest at some specified future date. Prediction is a similar, but more general term. Both might refer to formal statistical methods employing time series, cross-sectional or longitudinal data, or alternatively to less formal judgmental methods. Usage can differ between areas of application: for example, in hydrology the terms "forecast" and "forecasting" are sometimes reserved for estimates of values at certain specific future times, while the term "prediction" is used for more general estimates, such as the number of times floods will occur over a long period.

In mathematics and statistics, a stationary process is a stochastic process whose unconditional joint probability distribution does not change when shifted in time. Consequently, parameters such as mean and variance also do not change over time. To get an intuition of stationarity, one can imagine a frictionless pendulum. It swings back and forth in an oscillatory motion, yet the amplitude and frequency remain constant. Although the pendulum is moving, the process is stationary as its "statistics" are constant. However, if a force were to be applied to the pendulum, either the frequency or amplitude would change, thus making the process non-stationary.

In statistics, a moving average is a calculation to analyze data points by creating a series of averages of different subsets of the full data set. It is also called a moving mean (MM) or rolling mean and is a type of finite impulse response filter. Variations include: simple, cumulative, or weighted forms.

X-13ARIMA-SEATS, successor to X-12-ARIMA and X-11, is a set of statistical methods for seasonal adjustment and other descriptive analysis of time series data that are implemented in the U.S. Census Bureau's software package. These methods are or have been used by Statistics Canada, Australian Bureau of Statistics, and the statistical offices of many other countries.

In probability theory, stochastic drift is the change of the average value of a stochastic (random) process. A related concept is the drift rate, which is the rate at which the average changes. For example, a process that counts the number of heads in a series of fair coin tosses has a drift rate of 1/2 per toss. This is in contrast to the random fluctuations about this average value. The stochastic mean of that coin-toss process is 1/2 and the drift rate of the stochastic mean is 0, assuming 1 = heads and 0 = tails.

Proportional hazards models are a class of survival models in statistics. Survival models relate the time that passes, before some event occurs, to one or more covariates that may be associated with that quantity of time. In a proportional hazards model, the unique effect of a unit increase in a covariate is multiplicative with respect to the hazard rate. For example, taking a drug may halve one's hazard rate for a stroke occurring, or, changing the material from which a manufactured component is constructed may double its hazard rate for failure. Other types of survival models such as accelerated failure time models do not exhibit proportional hazards. The accelerated failure time model describes a situation where the biological or mechanical life history of an event is accelerated.

In mathematics, a Witt vector is an infinite sequence of elements of a commutative ring. Ernst Witt showed how to put a ring structure on the set of Witt vectors, in such a way that the ring of Witt vectors over the finite field of order p is the ring of -adic integers. They have a highly non-intuitive structure upon first glance because their additive and multiplicative structure depends on an infinite set of recursive formulas which do not behave like addition and multiplication formulas for standard p-adic integers. The main idea behind Witt vectors is instead of using the standard -adic expansion

The Berlin procedure (BV) is a mathematical procedure for time series decomposition and seasonal adjustment of monthly and quarterly economic time series. The mathematical foundations of the procedure were developed in 1960's at the Technical University of Berlin and the German Institute for Economic Research (DIW). The most important user of the procedure is the Federal Statistical Office of Germany.

The decomposition of time series is a statistical task that deconstructs a time series into several components, each representing one of the underlying categories of patterns. There are two principal types of decomposition, which are outlined below. 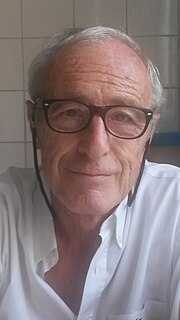 Agustín Maravall Herrero is a Spanish economist known for his contributions in statistics and econometrics time series analysis, in particular seasonal adjustment and in the estimation of signals in economic time series. He has completed a methodology and several computer programs that are used throughout the world by analysts, researchers, and data producers. An important use is official production of series adjusted for seasonality and (perhaps) other undesirable effects such as noise, outliers, or missing observations. Maravall has received several awards and distinctions and retired in December 2014 from the Bank of Spain.