then s is called a scale parameter, since its value determines the "scale" or statistical dispersion of the probability distribution. If s is large, then the distribution will be more spread out; if s is small then it will be more concentrated.

If the probability density exists for all values of the complete parameter set, then the density (as a function of the scale parameter only) satisfies

where f is the density of a standardized version of the density, i.e.

, and the scale parameter by

, then we require that

is the cmd for the parametrized family. [1] This modification is necessary in order for the standard deviation of a non-central Gaussian to be a scale parameter, since otherwise the mean would change when we rescale

. However, this alternative definition is not consistently used. [2]

Because f is a probability density function, it integrates to unity:

By the substitution rule of integral calculus, we then have

could equivalently be written with rate parameter λ as

A statistic can be used to estimate a scale parameter so long as it:

For instance, in order to use the median absolute deviation (MAD) to estimate the standard deviation of the normal distribution, one must multiply it by the factor 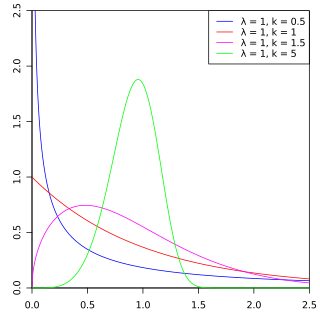 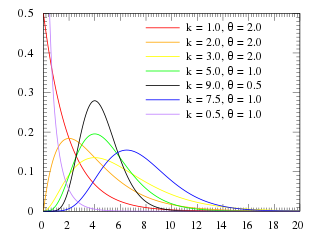 In Bayesian probability, the Jeffreys prior, named after Sir Harold Jeffreys, is a non-informative (objective) prior distribution for a parameter space; it is proportional to the square root of the determinant of the Fisher information matrix:

In statistics, the concept of being an invariant estimator is a criterion that can be used to compare the properties of different estimators for the same quantity. It is a way of formalising the idea that an estimator should have certain intuitively appealing qualities. Strictly speaking, "invariant" would mean that the estimates themselves are unchanged when both the measurements and the parameters are transformed in a compatible way, but the meaning has been extended to allow the estimates to change in appropriate ways with such transformations. The term equivariant estimator is used in formal mathematical contexts that include a precise description of the relation of the way the estimator changes in response to changes to the dataset and parameterisation: this corresponds to the use of "equivariance" in more general mathematics.