The elements of a dispersion fan diagram [1] are:

The scale on the circular line begins at the left with the starting value (e. g. with zero). The following values are applicated clockwise. The white tail of diameter indicates the median. The dark fan indicates the dispersion of the middle half of the observed values; thus it encompasses the values from the first to the third quartile. The white feathers indicate the dispersion of the middle 90% of the observed values.

The length of the white part of the diameter corresponds with the number of observations.

A fan chart gives a quick summary of observed values which depend from two variables. This is possible thanks of a dense representation and a constant size which does not depend on the size of the single dispersion fan diagrams.

An essential advantage compared to a sequence of box plots is the possibility to compare dispersion fan diagrams not only within one direction but within two directions (horizontally and vertically).

The following example presents data from the data set MathAchieve which is part of the R package nlme of José Pinheiro et al. [2] It contains mathematics achievement scores of 7185 students. The students are categorised according to sex and membership of a minority ethnic group.

The fan charts reveals clearly how the median value is partially following a big main tendency while the values of the single subgroups (with the cells) scatter largely what could lead to doubts about a possible correlation. 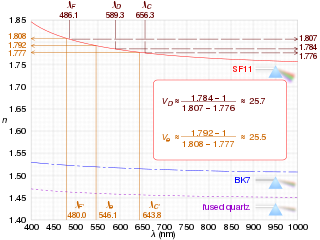 In fluid dynamics, the Darcy–Weisbach equation is an empirical equation that relates the head loss, or pressure loss, due to friction along a given length of pipe to the average velocity of the fluid flow for an incompressible fluid. The equation is named after Henry Darcy and Julius Weisbach. Currently, there is no formula more accurate or universally applicable than the Darcy-Weisbach supplemented by the Moody diagram or Colebrook equation.

In statistics, exploratory data analysis is an approach of analyzing data sets to summarize their main characteristics, often using statistical graphics and other data visualization methods. A statistical model can be used or not, but primarily EDA is for seeing what the data can tell us beyond the formal modeling or hypothesis testing task. Exploratory data analysis has been promoted by John Tukey since 1970 to encourage statisticians to explore the data, and possibly formulate hypotheses that could lead to new data collection and experiments. EDA is different from initial data analysis (IDA), which focuses more narrowly on checking assumptions required for model fitting and hypothesis testing, and handling missing values and making transformations of variables as needed. EDA encompasses IDA.

In software engineering, a class diagram in the Unified Modeling Language (UML) is a type of static structure diagram that describes the structure of a system by showing the system's classes, their attributes, operations, and the relationships among objects.

In mathematics and statistics, deviation is a measure of difference between the observed value of a variable and some other value, often that variable's mean. The sign of the deviation reports the direction of that difference. The magnitude of the value indicates the size of the difference.

In engineering, the Moody chart or Moody diagram is a graph in non-dimensional form that relates the Darcy–Weisbach friction factor fD, Reynolds number Re, and surface roughness for fully developed flow in a circular pipe. It can be used to predict pressure drop or flow rate down such a pipe.

A bubble chart is a type of chart that displays three dimensions of data. Each entity with its triplet of associated data is plotted as a disk that expresses two of the vi values through the disk's xy location and the third through its size. Bubble charts can facilitate the understanding of social, economical, medical, and other scientific relationships.

Rattle GUI is a free and open source software package providing a graphical user interface (GUI) for data mining using the R statistical programming language. Rattle is used in a variety of situations. Currently there are 15 different government departments in Australia, in addition to various other organisations around the world, which use Rattle in their data mining activities and as a statistical package.

Ordinal data is a categorical, statistical data type where the variables have natural, ordered categories and the distances between the categories are not known. These data exist on an ordinal scale, one of four levels of measurement described by S. S. Stevens in 1946. The ordinal scale is distinguished from the nominal scale by having a ranking. It also differs from the interval scale and ratio scale by not having category widths that represent equal increments of the underlying attribute.