For example, in an experiment that determines the distribution of possible values of the parameter

, if the subjective probability that

is a 95% credible interval.

It is possible to frame the choice of a credible interval within decision theory and, in that context, an optimal interval will always be a highest probability density set. [4]

Bayesian credible intervals can be quite different from frequentist confidence intervals for two reasons:

For the case of a single parameter and data that can be summarised in a single sufficient statistic, it can be shown that the credible interval and the confidence interval will coincide if the unknown parameter is a location parameter (i.e. the forward probability function has the form

), with a prior that is a uniform flat distribution; [5] and also if the unknown parameter is a scale parameter (i.e. the forward probability function has the form

), with a Jeffreys' prior

[5] — the latter following because taking the logarithm of such a scale parameter turns it into a location parameter with a uniform distribution. But these are distinctly special (albeit important) cases; in general no such equivalence can be made.

In statistics, the question of checking whether a coin is fair is one whose importance lies, firstly, in providing a simple problem on which to illustrate basic ideas of statistical inference and, secondly, in providing a simple problem that can be used to compare various competing methods of statistical inference, including decision theory. The practical problem of checking whether a coin is fair might be considered as easily solved by performing a sufficiently large number of trials, but statistics and probability theory can provide guidance on two types of question; specifically those of how many trials to undertake and of the accuracy an estimate of the probability of turning up heads, derived from a given sample of trials.

Lindley's paradox is a counterintuitive situation in statistics in which the Bayesian and frequentist approaches to a hypothesis testing problem give different results for certain choices of the prior distribution. The problem of the disagreement between the two approaches was discussed in Harold Jeffreys' 1939 textbook; it became known as Lindley's paradox after Dennis Lindley called the disagreement a paradox in a 1957 paper. 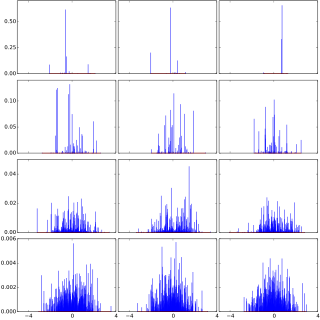 Neyman construction is a frequentist method to construct an interval at a confidence level such that if we repeat the experiment many times the interval will contain the true value of some parameter a fraction of the time. It is named after Jerzy Neyman.

In statistics, additive smoothing, also called Laplace smoothing, or Lidstone smoothing, is a technique used to smooth categorical data. Given an observation from a multinomial distribution with trials, a "smoothed" version of the data gives the estimator: