) but some (cointegrating) vector of coefficients exists to form a stationary linear combination of them. For instance, a stock market index and the price of its associated futures contract move through time, each roughly following a random walk. Testing the hypothesis that there is a statistically significant connection between the futures price and the spot price could now be done by testing for the existence of a cointegrated combination of the two series.

The first to introduce and analyse the concept of spurious—or nonsense—regression was Udny Yule in 1926. [1] Before the 1980s, many economists used linear regressions on non-stationary time series data, which Nobel laureate Clive Granger and Paul Newbold showed to be a dangerous approach that could produce spurious correlation, [2] [3] since standard detrending techniques can result in data that are still non-stationary. [4] Granger's 1987 paper with Robert Engle formalized the cointegrating vector approach, and coined the term. [5]

processes, Granger and Newbold showed that de-trending does not work to eliminate the problem of spurious correlation, and that the superior alternative is to check for co-integration. Two series with

trends can be co-integrated only if there is a genuine relationship between the two. Thus the standard current methodology for time series regressions is to check all-time series involved for integration. If there are

series on both sides of the regression relationship, then it's possible for regressions to give misleading results.

The possible presence of cointegration must be taken into account when choosing a technique to test hypotheses concerning the relationship between two variables having unit roots (i.e. integrated of at least order one). [2] The usual procedure for testing hypotheses concerning the relationship between non-stationary variables was to run ordinary least squares (OLS) regressions on data which had been differenced. This method is biased if the non-stationary variables are cointegrated.

For example, regressing the consumption series for any country (e.g. Fiji) against the GNP for a randomly selected dissimilar country (e.g. Afghanistan) might give a high R-squared relationship (suggesting high explanatory power on Fiji's consumption from Afghanistan's GNP). This is called spurious regression: two integrated

series which are not directly causally related may nonetheless show a significant correlation; this phenomenon is called spurious correlation.

The three main methods for testing for cointegration are:

are non-stationary and Order of integration d=1, then a linear combination of them must be stationary for some value of

, we could just test it for stationarity with something like a Dickey–Fuller test, Phillips–Perron test and be done. But because we don't know

, we must estimate this first, generally by using ordinary least squares (by regressing

A second regression is then run on the first differenced variables from the first regression, and the lagged residuals

is included as a regressor.

The Johansen test is a test for cointegration that allows for more than one cointegrating relationship, unlike the Engle–Granger method, but this test is subject to asymptotic properties, i.e. large samples. If the sample size is too small then the results will not be reliable and one should use Auto Regressive Distributed Lags (ARDL). [6] [7]

Peter C. B. Phillips and Sam Ouliaris (1990) show that residual-based unit root tests applied to the estimated cointegrating residuals do not have the usual Dickey–Fuller distributions under the null hypothesis of no-cointegration. [8] Because of the spurious regression phenomenon under the null hypothesis, the distribution of these tests have asymptotic distributions that depend on (1) the number of deterministic trend terms and (2) the number of variables with which co-integration is being tested. These distributions are known as Phillips–Ouliaris distributions and critical values have been tabulated. In finite samples, a superior alternative to the use of these asymptotic critical value is to generate critical values from simulations.

In practice, cointegration is often used for two

Tests for cointegration assume that the cointegrating vector is constant during the period of study. In reality, it is possible that the long-run relationship between the underlying variables change (shifts in the cointegrating vector can occur). The reason for this might be technological progress, economic crises, changes in the people's preferences and behaviour accordingly, policy or regime alteration, and organizational or institutional developments. This is especially likely to be the case if the sample period is long. To take this issue into account, tests have been introduced for cointegration with one unknown structural break, [9] and tests for cointegration with two unknown breaks are also available. [10]

Several Bayesian methods have been proposed to compute the posterior distribution of the number of cointegrating relationships and the cointegrating linear combinations. [11] 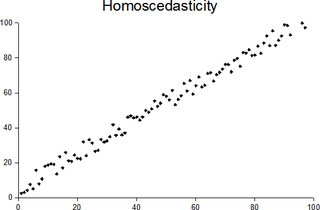 Linear trend estimation is a statistical technique to aid interpretation of data. When a series of measurements of a process are treated as, for example, a sequences or time series, trend estimation can be used to make and justify statements about tendencies in the data, by relating the measurements to the times at which they occurred. This model can then be used to describe the behaviour of the observed data, without explaining it. In this case linear trend estimation expresses data as a linear function of time, and can also be used to determine the significance of differences in a set of data linked by a categorical factor. An example of the latter from biomedical science would be levels of a molecule in the blood or tissues of patients with incrementally worsening disease – such as mild, moderate and severe. This is in contrast to an ANOVA, which is reserved for three or more independent groups.

In statistics, a spurious relationship or spurious correlation is a mathematical relationship in which two or more events or variables are associated but not causally related, due to either coincidence or the presence of a certain third, unseen factor. 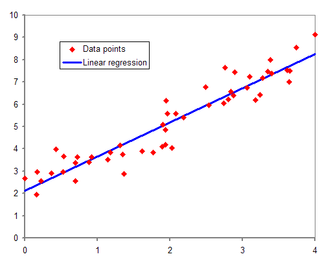 In statistics, the coefficient of determination, also spelled coëfficient, denoted R2 or r2 and pronounced "R squared", is the proportion of the variation in the dependent variable that is predictable from the independent variable(s). 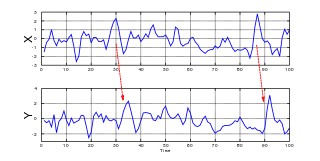 In probability theory and statistics, a unit root is a feature of some stochastic processes that can cause problems in statistical inference involving time series models. A linear stochastic process has a unit root if 1 is a root of the process's characteristic equation. Such a process is non-stationary but does not always have a trend.

In statistics, the Dickey–Fuller test tests the null hypothesis that a unit root is present in an autoregressive time series model. The alternative hypothesis is different depending on which version of the test is used, but is usually stationarity or trend-stationarity. The test is named after the statisticians David Dickey and Wayne Fuller, who developed it in 1979.

Cochrane–Orcutt estimation is a procedure in econometrics, which adjusts a linear model for serial correlation in the error term. Developed in the 1940s, it is named after statisticians Donald Cochrane and Guy Orcutt.