The Friedman test is a non-parametric statistical test developed by Milton Friedman. [1] [2] [3] Similar to the parametric repeated measures ANOVA, it is used to detect differences in treatments across multiple test attempts. The procedure involves ranking each row (or block) together, then considering the values of ranks by columns. Applicable to complete block designs, it is thus a special case of the Durbin test.

Classic examples of use are:

The Friedman test is widely supported by many statistical software packages.

Post-hoc tests were proposed by Schaich and Hamerle (1984) [7] as well as Conover (1971, 1980) [8] in order to decide which groups are significantly different from each other, based upon the mean rank differences of the groups. These procedures are detailed in Bortz, Lienert and Boehnke (2000, p. 275). [9] Eisinga, Heskes, Pelzer and Te Grotenhuis (2017) [10] provide an exact test for pairwise comparison of Friedman rank sums, implemented in R. The Eisinga c.s. exact test offers a substantial improvement over available approximate tests, especially if the number of groups (

) is large and the number of blocks (

Not all statistical packages support post-hoc analysis for Friedman's test, but user-contributed code exists that provides these facilities (for example in SPSS, [11] and in R. [12] ). Also, there is a specialized package available in R containing numerous non-parametric methods for post-hoc analysis after Friedman. [13] 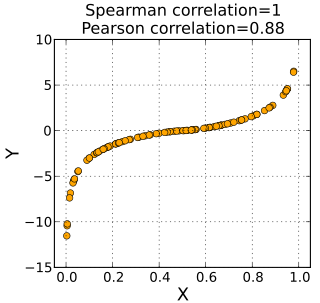 The Wilcoxon signed-rank test is a non-parametric statistical hypothesis test used to compare two related samples, matched samples, or repeated measurements on a single sample to assess whether their population mean ranks differ. It can be used as an alternative to the paired Student's t-test when the distribution of the difference between two samples' means cannot be assumed to be normally distributed. A Wilcoxon signed-rank test is a nonparametric test that can be used to determine whether two dependent samples were selected from populations having the same distribution.

In statistics, in the analysis of two-way randomized block designs where the response variable can take only two possible outcomes, Cochran's Q test is a non-parametric statistical test to verify whether k treatments have identical effects. It is named after William Gemmell Cochran. Cochran's Q test should not be confused with Cochran's C test, which is a variance outlier test. Put in simple technical terms, Cochran's Q test requires that there only be a binary response and that there be more than 2 groups of the same size. The test assesses whether the proportion of successes is the same between groups. Often it is used to assess if different observers of the same phenomenon have consistent results.

In statistics, an additive model (AM) is a nonparametric regression method. It was suggested by Jerome H. Friedman and Werner Stuetzle (1981) and is an essential part of the ACE algorithm. The AM uses a one-dimensional smoother to build a restricted class of nonparametric regression models. Because of this, it is less affected by the curse of dimensionality than e.g. a p-dimensional smoother. Furthermore, the AM is more flexible than a standard linear model, while being more interpretable than a general regression surface at the cost of approximation errors. Problems with AM include model selection, overfitting, and multicollinearity.

The Newman–Keuls or Student–Newman–Keuls (SNK)method is a stepwise multiple comparisons procedure used to identify sample means that are significantly different from each other. It was named after Student (1927), D. Newman, and M. Keuls. This procedure is often used as a post-hoc test whenever a significant difference between three or more sample means has been revealed by an analysis of variance (ANOVA). The Newman–Keuls method is similar to Tukey's range test as both procedures use studentized range statistics. Unlike Tukey's range test, the Newman–Keuls method uses different critical values for different pairs of mean comparisons. Thus, the procedure is more likely to reveal significant differences between group means and to commit type I errors by incorrectly rejecting a null hypothesis when it is true. In other words, the Neuman-Keuls procedure is more powerful but less conservative than Tukey's range test.

In statistics, Tukey's test of additivity, named for John Tukey, is an approach used in two-way ANOVA to assess whether the factor variables are additively related to the expected value of the response variable. It can be applied when there are no replicated values in the data set, a situation in which it is impossible to directly estimate a fully general non-additive regression structure and still have information left to estimate the error variance. The test statistic proposed by Tukey has one degree of freedom under the null hypothesis, hence this is often called "Tukey's one-degree-of-freedom test."

Ordinal data is a categorical, statistical data type where the variables have natural, ordered categories and the distances between the categories is not known. These data exist on an ordinal scale, one of four levels of measurement described by S. S. Stevens in 1946. The ordinal scale is distinguished from the nominal scale by having a ranking. It also differs from interval and ratio scales by not having category widths that represent equal increments of the underlying attribute.