For example, consider a normal population with mean

. Assume we repeatedly take samples of a given size from this population and calculate the arithmetic mean

The mean of a sample from a population having a normal distribution is an example of a simple statistic taken from one of the simplest statistical populations. For other statistics and other populations the formulas are more complicated, and often they do not exist in closed-form. In such cases the sampling distributions may be approximated through Monte-Carlo simulations, [1] bootstrap methods, or asymptotic distribution theory.

is the sample size (number of items in the sample).

An important implication of this formula is that the sample size must be quadrupled (multiplied by 4) to achieve half (1/2) the measurement error. When designing statistical studies where cost is a factor, this may have a role in understanding cost–benefit tradeoffs.

For the case where the statistic is the sample total, and samples are uncorrelated, the standard error is:

is the sample size (number of items in the sample).

In the military science of ballistics, circular error probable (CEP) is a measure of a weapon system's precision. It is defined as the radius of a circle, centered on the mean, whose perimeter is expected to include the landing points of 50% of the rounds; said otherwise, it is the median error radius. That is, if a given munitions design has a CEP of 100 m, when 100 munitions are targeted at the same point, 50 will fall within a circle with a radius of 100 m around their average impact point. 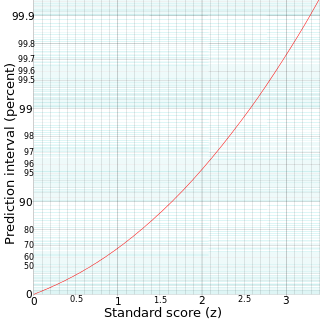