Let T1 and T2 be two unbiased estimators for the same parameter θ. The estimator T2 would be called more efficient than estimator T1 if Var(T2) < Var(T1), irrespective of the value of θ. [1] We can also say that the most efficient estimators are the ones with the least variability of outcomes. Therefore, if the estimator has smallest variance among sample to sample, it is both most efficient and unbiased. We extend the notion of efficiency by saying that estimator T2 is more efficient than estimator T1 (for the same parameter of interest), if the MSE(mean square error) of T2 is smaller than the MSE of T1. [1]

Generally, we must consider the distribution of the population when determining the efficiency of estimators. For example, in a normal distribution, the mean is considered more efficient than the median, but the same does not apply in asymmetrical, or skewed, distributions.

In statistics, the job of a statistician is to interpret the data that they have collected and to draw statistically valid conclusion about the population under investigation. But in many cases the raw data, which are too numerous and too costly to store, are not suitable for this purpose. Therefore, the statistician would like to condense the data by computing some statistics and to base his analysis on these statistics so that there is no loss of relevant information in doing so, that is the statistician would like to choose those statistics which exhaust all information about the parameter, which is contained in the sample. We define sufficient statistics as follows: Let X =( X1, X2, ... ,Xn) be a random sample. A statistic T(X) is said to be sufficient for θ(or for the family of distribution) if the conditional distribution of X given T is free from θ. [2]

The Minimum Message Length (MML) point estimator is based in Bayesian information theory and is not so directly related to the posterior distribution.

Below are some commonly used methods of estimating unknown parameters which are expected to provide estimators having some of these important properties. In general, depending on the situation and the purpose of our study we apply any one of the methods that may be suitable among the methods of point estimation.

This method of maximum likelihood is due to R.A. Fisher. It is the most important general method of estimation. This estimator method attempts to acquire unknown parameters that maximizes the likelihood function. It uses a known model (ex. the normal distribution) and uses the values in the model to maximize a likelihood function to find the most suitable match for the data. [9]

Let X = (X1, X2, ... ,Xn) denote a random sample with joint p.d.f or p.m.f. f(x, θ) (θ may be a vector). The function f(x, θ), considered as a function of θ, is called the likelihood function. In this case, it is denoted by L(θ). The principle of maximum likelihood consists of choosing an estimate within the admissible range of θ, that maximizes the likelihood. This estimator is called the maximum likelihood estimate (MLE) of θ. In order to obtain the MLE of θ, we use the equation

In the method of least square, we consider the estimation of parameters using some specified form of the expectation and second moment of the observations. For

The method of minimum-variance unbiased estimator minimizes the risk (expected loss) of the squared-error loss-function.

Median-unbiased estimator minimizes the risk of the absolute-error loss function.

There are two major types of estimates: point estimate and confidence interval estimate. In the point estimate we try to choose a unique point in the parameter space which can reasonably be considered as the true value of the parameter. On the other hand, instead of unique estimate of the parameter, we are interested in constructing a family of sets that contain the true (unknown) parameter value with a specified probability. In many problems of statistical inference we are not interested only in estimating the parameter or testing some hypothesis concerning the parameter, we also want to get a lower or an upper bound or both, for the real-valued parameter. To do this, we need to construct a confidence interval.

Here two limits are computed from the set of observations, say ln and un and it is claimed with a certain degree of confidence (measured in probabilistic terms) that the true value of γ lies between ln and un. Thus we get an interval (ln and un) which we expect would include the true value of γ(θ). So this type of estimation is called confidence interval estimation. [2] This estimation provides a range of values which the parameter is expected to lie. It generally gives more information than point estimates and are preferred when making inferences. In some way, we can say that point estimation is the opposite of interval estimation. 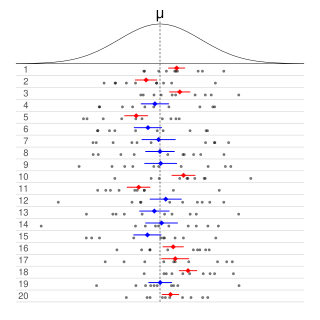 Estimation theory is a branch of statistics that deals with estimating the values of parameters based on measured empirical data that has a random component. The parameters describe an underlying physical setting in such a way that their value affects the distribution of the measured data. An estimator attempts to approximate the unknown parameters using the measurements. In estimation theory, two approaches are generally considered:

In statistics, shrinkage is the reduction in the effects of sampling variation. In regression analysis, a fitted relationship appears to perform less well on a new data set than on the data set used for fitting. In particular the value of the coefficient of determination 'shrinks'. This idea is complementary to overfitting and, separately, to the standard adjustment made in the coefficient of determination to compensate for the subjunctive effects of further sampling, like controlling for the potential of new explanatory terms improving the model by chance: that is, the adjustment formula itself provides "shrinkage." But the adjustment formula yields an artificial shrinkage.

In statistics, Fisher consistency, named after Ronald Fisher, is a desirable property of an estimator asserting that if the estimator were calculated using the entire population rather than a sample, the true value of the estimated parameter would be obtained.

In the comparison of various statistical procedures, efficiency is a measure of quality of an estimator, of an experimental design, or of a hypothesis testing procedure. Essentially, a more efficient estimator, experiment, or test needs fewer observations than a less efficient one to achieve a given error performance. An efficient estimator is characterized by a small variance or mean square error, indicating that there is a small deviance between the estimated value and the "true" value.

In statistics, suppose that we have been given some data, and we are selecting a statistical model for that data. The relative likelihood compares the relative plausibilities of different candidate models or of different values of a parameter of a single model.