For practical statistics problems, it is important to determine the MVUE if one exists, since less-than-optimal procedures would naturally be avoided, other things being equal. This has led to substantial development of statistical theory related to the problem of optimal estimation.

While combining the constraint of unbiasedness with the desirability metric of least variance leads to good results in most practical settings—making MVUE a natural starting point for a broad range of analyses—a targeted specification may perform better for a given problem; thus, MVUE is not always the best stopping point.

i.i.d. from some member of a family of densities

is the parameter space. An unbiased estimator

for any other unbiased estimator

If an unbiased estimator of

exists, then one can prove there is an essentially unique MVUE. [1] Using the Rao–Blackwell theorem one can also prove that determining the MVUE is simply a matter of finding a complete sufficient statistic for the family

and conditioning any unbiased estimator on it.

Further, by the Lehmann–Scheffé theorem, an unbiased estimator that is a function of a complete, sufficient statistic is the UMVUE estimator.

is a complete sufficient statistic for the family of densities. Then

An efficient estimator need not exist, but if it does and if it is unbiased, it is the MVUE. Since the mean squared error (MSE) of an estimator δ is

and we wish to find the UMVU estimator of

First we recognize that the density can be written as

Which is an exponential family with sufficient statistic

. In fact this is a full rank exponential family, and therefore

is complete sufficient. See exponential family for a derivation which shows

is complete sufficient, thus the UMVU estimator is

This example illustrates that an unbiased function of the complete sufficient statistic will be UMVU, as Lehmann–Scheffé theorem states.

In statistics, completeness is a property of a statistic in relation to a model for a set of observed data. In essence, it ensures that the distributions corresponding to different values of the parameters are distinct.

In statistics, an efficient estimator is an estimator that estimates the quantity of interest in some “best possible” manner. The notion of “best possible” relies upon the choice of a particular loss function — the function which quantifies the relative degree of undesirability of estimation errors of different magnitudes. The most common choice of the loss function is quadratic, resulting in the mean squared error criterion of optimality.

In statistics, the Chapman–Robbins bound or Hammersley–Chapman–Robbins bound is a lower bound on the variance of estimators of a deterministic parameter. It is a generalization of the Cramér–Rao bound; compared to the Cramér–Rao bound, it is both tighter and applicable to a wider range of problems. However, it is usually more difficult to compute.

In statistics, the concept of being an invariant estimator is a criterion that can be used to compare the properties of different estimators for the same quantity. It is a way of formalising the idea that an estimator should have certain intuitively appealing qualities. Strictly speaking, "invariant" would mean that the estimates themselves are unchanged when both the measurements and the parameters are transformed in a compatible way, but the meaning has been extended to allow the estimates to change in appropriate ways with such transformations. The term equivariant estimator is used in formal mathematical contexts that include a precise description of the relation of the way the estimator changes in response to changes to the dataset and parameterisation: this corresponds to the use of "equivariance" in more general mathematics.

Location estimation in wireless sensor networks is the problem of estimating the location of an object from a set of noisy measurements. These measurements are acquired in a distributed manner by a set of sensors. 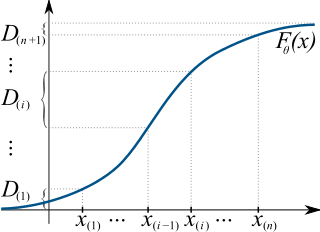