In statistical theory, a U-statistic is a class of statistics that is especially important in estimation theory; the letter "U" stands for unbiased. In elementary statistics, U-statistics arise naturally in producing minimum-variance unbiased estimators.

Many statistics originally derived for particular parametric families have been recognized as U-statistics for general distributions. In non-parametric statistics, the theory of U-statistics is used to establish for statistical procedures (such as estimators and tests) and estimators relating to the asymptotic normality and to the variance (in finite samples) of such quantities. [3] The theory has been used to study more general statistics as well as stochastic processes, such as random graphs. [4] [5] [6]

Sen (1992) provides a review of the paper by Wassily Hoeffding (1948), which introduced U-statistics and set out the theory relating to them, and in doing so Sen outlines the importance U-statistics have in statistical theory. Sen says [7] "The impact of Hoeffding (1948) is overwhelming at the present time and is very likely to continue in the years to come". Note that the theory of U-statistics is not limited to [8] the case of independent and identically-distributed random variables or to scalar random-variables. [9]

The term U-statistic, due to Hoeffding (1948), is defined as follows.

be a real-valued or complex-valued function of

is equal to the average over ordered samples

of the sample values

, the average being taken over distinct ordered samples of size

is necessarily a symmetric function.

U-statistics are very natural in statistical work, particularly in Hoeffding's context of independent and identically-distributed random variables, or more generally for exchangeable sequences, such as in simple random sampling from a finite population, where the defining property is termed 'inheritance on the average'.

Fisher's k-statistics and Tukey's polykays are examples of homogeneous polynomial U-statistics (Fisher, 1929; Tukey, 1950). For a simple random sample φ of size n taken from a population of size N, the U-statistic has the property that the average over sample values ƒn(xφ) is exactly equal to the population value ƒN(x).

is the sample mean.

, the U-statistic is the mean pairwise deviation

, the U-statistic is the sample variance

, the sample skewness defined for

The following case highlights an important point. If

is the median of three values,

is not the median of

values. However, it is a minimum variance unbiased estimate of the expected value of the median of three values, not the median of the population. Similar estimates play a central role where the parameters of a family of probability distributions are being estimated by probability weighted moments or L-moments.

In statistics and probability theory, the median is the value separating the higher half from the lower half of a data sample, a population or a probability distribution. For a data set, it may be thought of as the "middle" value. For example, the basic advantage of the median in describing data compared to the mean is that it is not skewed so much by a small proportion of extremely large or small values, and so it may give a better idea of a "typical" value. For example, in understanding statistics like household income or assets, which vary greatly, the mean may be skewed by a small number of extremely high or low values. Median income, for example, may be a better way to suggest what a "typical" income is. Because of this, the median is of central importance in robust statistics, as it is the most resistant statistic, having a breakdown point of 50%: so long as no more than half the data are contaminated, the median will not give an arbitrarily large or small result.

In probability theory, the central limit theorem (CLT) establishes that, in some situations, when independent random variables are added, their properly normalized sum tends toward a normal distribution even if the original variables themselves are not normally distributed. The theorem is a key concept in probability theory because it implies that probabilistic and statistical methods that work for normal distributions can be applicable to many problems involving other types of distributions. 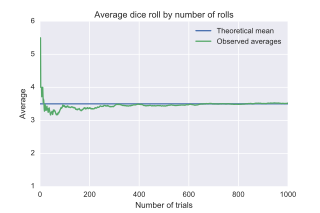 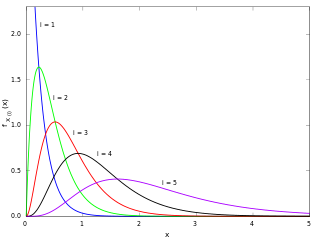 In statistics, completeness is a property of a statistic in relation to a model for a set of observed data. In essence, it ensures that the distributions corresponding to different values of the parameters are distinct.

In statistics, an efficient estimator is an estimator that estimates the quantity of interest in some “best possible” manner. The notion of “best possible” relies upon the choice of a particular loss function — the function which quantifies the relative degree of undesirability of estimation errors of different magnitudes. The most common choice of the loss function is quadratic, resulting in the mean squared error criterion of optimality.

Probability theory and statistics have some commonly used conventions, in addition to standard mathematical notation and mathematical symbols.

In statistics, the bias of an estimator is the difference between this estimator's expected value and the true value of the parameter being estimated. An estimator or decision rule with zero bias is called unbiased. In statistics, "bias" is an objective property of an estimator. Bias can also be measured with respect to the median, rather than the mean, in which case one distinguishes median-unbiased from the usual mean-unbiasedness property. Bias is related to consistency in that consistent estimators are convergent and asymptotically unbiased, though individual estimators in a consistent sequence may be biased ; see bias versus consistency.