Last updated April 05, 2022
Concept in probability theory and statistics
Not to be confused with Coefficient of partial determination.

A simple way to compute the sample partial correlation for some data is to solve the two associated linear regression problems, get the residuals, and calculate the correlation between the residuals. Let X and Y be, as above, random variables taking real values, and let Z be the n-dimensional vector-valued random variable. We write xi, yi and zi to denote the ith of N i.i.d. observations from some joint probability distribution over real random variables X, Y and Z, with zi having been augmented with a 1 to allow for a constant term in the regression. Solving the linear regression problem amounts to finding (n+1)-dimensional regression coefficient vectors

with N being the number of observations and

the scalar product between the vectors w and v.

The residuals are then

and the sample partial correlation is then given by the usual formula for sample correlation, but between these new derived values:

In the first expression the three terms after minus signs all equal 0 since each contains the sum of residuals from an ordinary least squares regression.

Suppose we have the following data on three variables, X, Y, and Z:

The lower part of the above code reports generalized nonlinear partial correlation coefficient between X and Y after removing the nonlinear effect of Z to be 0.8844. Also the generalized partial correlation coefficient between X and Z after removing the nonlinear effect of Y to be 0.1581. See the R package `generalCorr' and its vignettes for details. Simulation and other details are in Vinod (2017) "Generalized correlation and kernel causality with applications in development economics," Communications in Statistics - Simulation and Computation, vol. 46, [4513, 4534], available online: 29 Dec 2015, URL https://doi.org/10.1080/03610918.2015.1122048.

It holds, for any

Naïvely implementing this computation as a recursive algorithm yields an exponential time complexity. However, this computation has the overlapping subproblems property, such that using dynamic programming or simply caching the results of the recursive calls yields a complexity of

Note in the case where Z is a single variable, this reduces to:[ citation needed ]

time, another approach allows all partial correlations to be computed between any two variables Xi and Xj of a set V of cardinality n, given all others, i.e.,

, if the covariance matrix Ω = (ρXiXj), is positive definite and therefore invertible. If we define the precision matrix P = (pij ) = Ω−1, we have:

It can be shown that the residuals eX,i coming from the linear regression of X on Z, if also considered as an N-dimensional vector eX (denoted rX in the accompanying graph), have a zero scalar product with the vector z generated by Z. This means that the residuals vector lies on an (N–1)-dimensional hyperplane Sz that is perpendicular to z.

The same also applies to the residuals eY,i generating a vector eY. The desired partial correlation is then the cosine of the angle φ between the projections eX and eY of x and y, respectively, onto the hyperplane perpendicular to z. [3] : ch. 7

With the assumption that all involved variables are multivariate Gaussian, the partial correlation ρXY·Z is zero if and only if X is conditionally independent from Y given Z. [1] This property does not hold in the general case.

To test if a sample partial correlation

The null hypothesis is

, to be tested against the two-tail alternative

. We reject H0 with significance level α if:

The distribution of the sample partial correlation was described by Fisher. [5]

The semipartial (or part) correlation can be viewed as more practically relevant "because it is scaled to (i.e., relative to) the total variability in the dependent (response) variable." [7] Conversely, it is less theoretically useful because it is less precise about the role of the unique contribution of the independent variable.

Use in time series analysis

This function is used to determine the appropriate lag length for an autoregression.

In statistics, correlation or dependence is any statistical relationship, whether causal or not, between two random variables or bivariate data. Although in the broadest sense, "correlation" may indicate any type of association, in statistics it normally refers to the degree to which a pair of variables are linearly related. Familiar examples of dependent phenomena include the correlation between the height of parents and their offspring, and the correlation between the price of a good and the quantity the consumers are willing to purchase, as it is depicted in the so-called demand curve.

In fluid dynamics, the Euler equations are a set of quasilinear partial differential equations governing adiabatic and inviscid flow. They are named after Leonhard Euler. In particular, they correspond to the Navier–Stokes equations with zero viscosity and zero thermal conductivity. 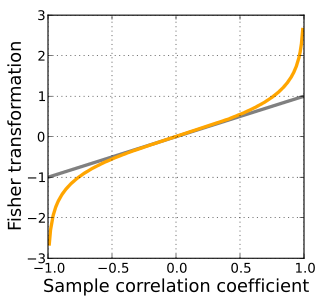 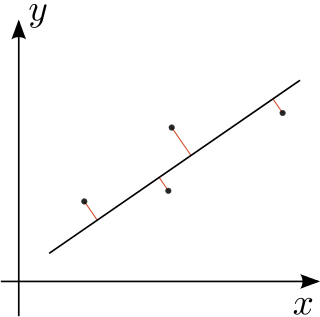 The Mehler kernel is a complex-valued function found to be the propagator of the quantum harmonic oscillator.

Given a probit model y=1[y* > 0] where y* = x1 β + zδ + u, and u ~ N(0,1), without losing generality, z can be represented as z = x1 θ1 + x2 θ2 + v. When u is correlated with v, there will be an issue of endogeneity. This can be caused by omitted variables and measurement errors. There are also many cases where z is partially determined by y and endogeneity issue arises. For instance, in a model evaluating the effect of different patient features on their choice of whether going to hospital, y is the choice and z is the amount of the medicine a respondent took, then it is very intuitive that more often the respondent goes to hospital, it is more likely that she took more medicine, hence endogeneity issue arises. When there are endogenous explanatory variables, the estimator generated by usual estimation procedure will be inconsistent, then the corresponding estimated Average Partial Effect (APE) will be inconsistent, too.