Last updated November 01, 2021
Statistical property quantifying how much a collection of data is spread out

In statistics, dispersion (also called variability, scatter, or spread) is the extent to which a distribution is stretched or squeezed. [1] Common examples of measures of statistical dispersion are the variance, standard deviation, and interquartile range. For instance, when the variance of data in a set is large, the data is widely scattered. On the other hand, when the variance is small, the data in the set is clustered.

Dispersion is contrasted with location or central tendency, and together they are the most used properties of distributions.

A measure of statistical dispersion is a nonnegative real number that is zero if all the data are the same and increases as the data become more diverse.

These are frequently used (together with scale factors) as estimators of scale parameters, in which capacity they are called estimates of scale. Robust measures of scale are those unaffected by a small number of outliers, and include the IQR and MAD.

All the above measures of statistical dispersion have the useful property that they are location-invariant and linear in scale. This means that if a random variable X has a dispersion of SX then a linear transformation Y = aX + b for real a and b should have dispersion SY = |a|SX, where |a| is the absolute value of a, that is, ignores a preceding negative sign –.

Other measures of dispersion are dimensionless . In other words, they have no units even if the variable itself has units. These include:

There are other measures of dispersion:

For categorical variables, it is less common to measure dispersion by a single number; see qualitative variation. One measure that does so is the discrete entropy.

In the physical sciences, such variability may result from random measurement errors: instrument measurements are often not perfectly precise, i.e., reproducible, and there is additional inter-rater variability in interpreting and reporting the measured results. One may assume that the quantity being measured is stable, and that the variation between measurements is due to observational error. A system of a large number of particles is characterized by the mean values of a relatively few number of macroscopic quantities such as temperature, energy, and density. The standard deviation is an important measure in fluctuation theory, which explains many physical phenomena, including why the sky is blue. [4]

In the biological sciences, the quantity being measured is seldom unchanging and stable, and the variation observed might additionally be intrinsic to the phenomenon: It may be due to inter-individual variability, that is, distinct members of a population differing from each other. Also, it may be due to intra-individual variability, that is, one and the same subject differing in tests taken at different times or in other differing conditions. Such types of variability are also seen in the arena of manufactured products; even there, the meticulous scientist finds variation.

In economics, finance, and other disciplines, regression analysis attempts to explain the dispersion of a dependent variable, generally measured by its variance, using one or more independent variables each of which itself has positive dispersion. The fraction of variance explained is called the coefficient of determination.

A partial ordering of dispersion

In descriptive statistics, summary statistics are used to summarize a set of observations, in order to communicate the largest amount of information as simply as possible. Statisticians commonly try to describe the observations in 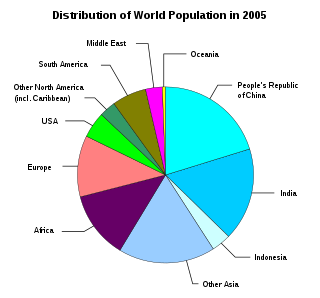 In statistics, as opposed to its general use in mathematics, a parameter is any measured quantity of a statistical population that summarises or describes an aspect of the population, such as a mean or a standard deviation. If a population exactly follows a known and defined distribution, for example the normal distribution, then a small set of parameters can be measured which completely describes the population, and can be considered to define a probability distribution for the purposes of extracting samples from this population.

In mathematics and statistics, deviation is a measure of difference between the observed value of a variable and some other value, often that variable's mean. The sign of the deviation reports the direction of that difference. The magnitude of the value indicates the size of the difference.

In statistics, an L-estimator is an estimator which is a linear combination of order statistics of the measurements. This can be as little as a single point, as in the median, or as many as all points, as in the mean.

In statistics, robust measures of scale are methods that quantify the statistical dispersion in a sample of numerical data while resisting outliers. The most common such robust statistics are the interquartile range (IQR) and the median absolute deviation (MAD). These are contrasted with conventional or non-robust measures of scale, such as sample variance or standard deviation, which are greatly influenced by outliers.