One- and two-tailed tests

In statistical significance testing, a one-tailed test and a two-tailed test are alternative ways of computing the statistical significance of a parameter inferred from a data set, in terms of a test statistic. A two-tailed test is appropriate if the estimated value is greater or less than a certain range of values, for example, whether a test taker may score above or below a specific range of scores. This method is used for null hypothesis testing and if the estimated value exists in the critical areas, the alternative hypothesis is accepted over the null hypothesis. A one-tailed test is appropriate if the estimated value may depart from the reference value in only one direction, left or right, but not both. An example can be whether a machine produces more than one-percent defective products. In this situation, if the estimated value exists in one of the one-sided critical areas, depending on the direction of interest (greater than or less than), the alternative hypothesis is accepted over the null hypothesis. Alternative names are one-sided and two-sided tests; the terminology "tail" is used because the extreme portions of distributions, where observations lead to rejection of the null hypothesis, are small and often "tail off" toward zero as in the normal distribution, colored in yellow, or "bell curve", pictured on the right and colored in green.

In the approach of Ronald Fisher, the null hypothesis H0 will be rejected when the p-value of the test statistic is sufficiently extreme (vis-a-vis the test statistic's sampling distribution) and thus judged unlikely to be the result of chance. This is usually done by comparing the resulting p-value with the specified significance level, denoted by

, the critical regions would exist on the two tail ends of the distribution with an area of

each for a two-tailed test. Alternatively, the critical region would solely exist on the single tail end with an area of

) if the data is in the direction opposite of the critical region specified by the test.

For example, if flipping a coin, testing whether it is biased towards heads is a one-tailed test, and getting data of "all heads" would be seen as highly significant, while getting data of "all tails" would be not significant at all (p = 1). By contrast, testing whether it is biased in either direction is a two-tailed test, and either "all heads" or "all tails" would both be seen as highly significant data. In medical testing, while one is generally interested in whether a treatment results in outcomes that are better than chance, thus suggesting a one-tailed test; a worse outcome is also interesting for the scientific field, therefore one should use a two-tailed test that corresponds instead to testing whether the treatment results in outcomes that are different from chance, either better or worse. [5] In the archetypal lady tasting tea experiment, Fisher tested whether the lady in question was better than chance at distinguishing two types of tea preparation, not whether her ability was different from chance, and thus he used a one-tailed test.

Main article: Checking whether a coin is fair

In coin flipping, the null hypothesis is a sequence of Bernoulli trials with probability 0.5, yielding a random variable X which is 1 for heads and 0 for tails, and a common test statistic is the sample mean (of the number of heads)

If testing for whether the coin is biased towards heads, a one-tailed test would be used – only large numbers of heads would be significant. In that case a data set of five heads (HHHHH), with sample mean of 1, has a

The p-value was introduced by Karl Pearson [6] in the Pearson's chi-squared test, where he defined P (original notation) as the probability that the statistic would be at or above a given level. This is a one-tailed definition, and the chi-squared distribution is asymmetric, only assuming positive or zero values, and has only one tail, the upper one. It measures goodness of fit of data with a theoretical distribution, with zero corresponding to exact agreement with the theoretical distribution; the p-value thus measures how likely the fit would be this bad or worse.

Fisher emphasized the importance of measuring the tail – the observed value of the test statistic and all more extreme – rather than simply the probability of specific outcome itself, in his The Design of Experiments (1935). [8] He explains this as because a specific set of data may be unlikely (in the null hypothesis), but more extreme outcomes likely, so seen in this light, the specific but not extreme unlikely data should not be considered significant.

If the test statistic follows a Student's t-distribution in the null hypothesis – which is common where the underlying variable follows a normal distribution with unknown scaling factor, then the test is referred to as a one-tailed or two-tailed t-test. If the test is performed using the actual population mean and variance, rather than an estimate from a sample, it would be called a one-tailed or two-tailed Z-test.

In null hypothesis significance testing, the p-value is the probability of obtaining test results at least as extreme as the results actually observed, under the assumption that the null hypothesis is correct. A very small p-value means that such an extreme observed outcome would be very unlikely under the null hypothesis. Reporting p-values of statistical tests is common practice in academic publications of many quantitative fields. Since the precise meaning of p-value is hard to grasp, misuse is widespread and has been a major topic in metascience.

Fisher's exact test is a statistical significance test used in the analysis of contingency tables. Although in practice it is employed when sample sizes are small, it is valid for all sample sizes. It is named after its inventor, Ronald Fisher, and is one of a class of exact tests, so called because the significance of the deviation from a null hypothesis can be calculated exactly, rather than relying on an approximation that becomes exact in the limit as the sample size grows to infinity, as with many statistical tests.

In statistics, the binomial test is an exact test of the statistical significance of deviations from a theoretically expected distribution of observations into two categories.

In statistics, an exact (significance) test is a test where if the null hypothesis is true then all assumptions, upon which the derivation of the distribution of the test statistic is based, are met. Using an exact test provides a significance test that keeps the Type I error rate of the test at the desired significance level of the test. For example an exact test at significance level of , when repeating the test over many samples where the null hypotheses is true, will reject at most of the time. This is opposed to an approximate test in which the desired type I error rate is only approximately kept, while this approximation may be made as close to as desired by making the sample size big enough.

In statistical hypothesis testing, a type I error is the rejection of a true null hypothesis, while a type II error is the non-rejection of a false null hypothesis. Much of statistical theory revolves around the minimization of one or both of these errors, though the complete elimination of either is a statistical impossibility for non-deterministic algorithms. By selecting a low threshold (cut-off) value and modifying the alpha (p) level, the quality of the hypothesis test can be increased. The knowledge of Type I errors and Type II errors is widely used in medical science, biometrics and computer science. 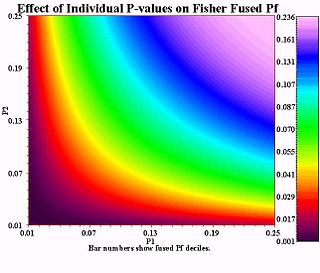 In statistics, Fisher's method, also known as Fisher's combined probability test, is a technique for data fusion or "meta-analysis". It was developed by and named for Ronald Fisher. In its basic form, it is used to combine the results from several independent tests bearing upon the same overall hypothesis (H0).