Many terms are used to refer to various notions of distance; these are often confusingly similar, and may be used inconsistently between authors and over time, either loosely or with precise technical meaning. In addition to "distance", similar terms include deviance, deviation, discrepancy, discrimination, and divergence, as well as others such as contrast function and metric. Terms from information theory include cross entropy, relative entropy, discrimination information, and information gain.

A metric on a set X is a function (called the distance function or simply distance) d : X × X → R+ (where R+ is the set of non-negative real numbers). For all x, y, z in X, this function is required to satisfy the following conditions:

Some important statistical distances include the following:

Information theory is the scientific study of the quantification, storage, and communication of digital information. The field was fundamentally established by the works of Harry Nyquist and Ralph Hartley, in the 1920s, and Claude Shannon in the 1940s. The field is at the intersection of probability theory, statistics, computer science, statistical mechanics, information engineering, and electrical engineering.

Probability theory is the branch of mathematics concerned with probability. Although there are several different probability interpretations, probability theory treats the concept in a rigorous mathematical manner by expressing it through a set of axioms. Typically these axioms formalise probability in terms of a probability space, which assigns a measure taking values between 0 and 1, termed the probability measure, to a set of outcomes called the sample space. Any specified subset of the sample space is called an event. Central subjects in probability theory include discrete and continuous random variables, probability distributions, and stochastic processes, which provide mathematical abstractions of non-deterministic or uncertain processes or measured quantities that may either be single occurrences or evolve over time in a random fashion. Although it is not possible to perfectly predict random events, much can be said about their behavior. Two major results in probability theory describing such behaviour are the law of large numbers and the central limit theorem.

In statistics, correlation or dependence is any statistical relationship, whether causal or not, between two random variables or bivariate data. In the broadest sense correlation is any statistical association, though it actually refers to the degree to which a pair of variables are linearly related. Familiar examples of dependent phenomena include the correlation between the height of parents and their offspring, and the correlation between the price of a good and the quantity the consumers are willing to purchase, as it is depicted in the so-called demand curve. 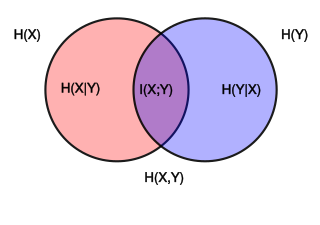 In mathematical statistics, the Kullback–Leibler divergence,, is a measure of how one probability distribution is different from a second, reference probability distribution. Applications include characterizing the relative (Shannon) entropy in information systems, randomness in continuous time-series, and information gain when comparing statistical models of inference. In contrast to variation of information, it is a distribution-wise asymmetric measure and thus does not qualify as a statistical metric of spread – it also does not satisfy the triangle inequality. In the simple case, a relative entropy of 0 indicates that the two distributions in question have identical quantities of information. In simplified terms, it is a measure of surprise, with diverse applications such as applied statistics, fluid mechanics, neuroscience and bioinformatics.

In mathematics, probabilistic metric spaces are a generalization of metric spaces where the distance no longer takes values in the non-negative real numbersc R ≥ 0, but in distribution functions.

In decision theory, a score function, or scoring rule, measures the accuracy of probabilistic predictions. It is applicable to tasks in which predictions must assign probabilities to a set of mutually exclusive outcomes or classes. The set of possible outcomes can be either binary or categorical in nature, and the probabilities assigned to this set of outcomes must sum to one. A score can be thought of as either a measure of the "calibration" of a set of probabilistic predictions, or as a "cost function" or "loss function".

In statistics and information geometry, divergence or a contrast function is a function which establishes the "distance" of one probability distribution to the other on a statistical manifold. The divergence is a weaker notion than that of the distance, in particular the divergence need not be symmetric, and need not satisfy the triangle inequality.

In mathematics, the Łukaszyk–Karmowski metric is a function defining a distance between two random variables or two random vectors. This function is not a metric as it does not satisfy the identity of indiscernibles condition of the metric, that is for two identical arguments its value is greater than zero. The concept is named after Szymon Łukaszyk and Wojciech Karmowski.