In statistics, cluster sampling is a sampling plan used when mutually homogeneous yet internally heterogeneous groupings are evident in a statistical population. It is often used in marketing research. In this sampling plan, the total population is divided into these groups (known as clusters) and a simple random sample of the groups is selected. The elements in each cluster are then sampled. If all elements in each sampled cluster are sampled, then this is referred to as a "one-stage" cluster sampling plan. If a simple random subsample of elements is selected within each of these groups, this is referred to as a "two-stage" cluster sampling plan. A common motivation for cluster sampling is to reduce the total number of interviews and costs given the desired accuracy. For a fixed sample size, the expected random error is smaller when most of the variation in the population is present internally within the groups, and not between the groups.

There is also multistage cluster sampling, where at least two stages are taken in selecting elements from clusters.

When clusters are of different sizes

Without modifying the estimated parameter, cluster sampling is unbiased when the clusters are approximately the same size. In this case, the parameter is computed by combining all the selected clusters. When the clusters are of different sizes there are several options:

One method is to sample clusters and then survey all elements in that cluster. Another method is a two-stage method of sampling a fixed proportion of units (be it 5% or 50%, or another number, depending on cost considerations) from within each of the selected clusters. Relying on the sample drawn from these options will yield an unbiased estimator. However, the sample size is no longer fixed upfront. This leads to a more complicated formula for the standard error of the estimator, as well as issues with the optics of the study plan (since the power analysis and the cost estimations often relate to a specific sample size).

An example of cluster sampling is area sampling or geographical cluster sampling. Each cluster is a geographical area. Because a geographically dispersed population can be expensive to survey, greater economy than simple random sampling can be achieved by grouping several respondents within a local area into a cluster. It is usually necessary to increase the total sample size to achieve equivalent precision in the estimators, but cost savings may make such an increase in sample size feasible.

Cluster sampling is used to estimate high mortalities in cases such as wars, famines and natural disasters. [1]

Major use: when the sampling frame of all elements is not available we can resort only to the cluster sampling.

Two-stage cluster sampling, a simple case of multistage sampling, is obtained by selecting cluster samples in the first stage and then selecting a sample of elements from every sampled cluster. Consider a population of N clusters in total. In the first stage, n clusters are selected using ordinary cluster sampling method. In the second stage, simple random sampling is usually used. [3] It is used separately in every cluster and the numbers of elements selected from different clusters are not necessarily equal. The total number of clusters N, number of clusters selected n, and numbers of elements from selected clusters need to be pre-determined by the survey designer. Two-stage cluster sampling aims at minimizing survey costs and at the same time controlling the uncertainty related to estimates of interest. [4] This method can be used in health and social sciences. For instance, researchers used two-stage cluster sampling to generate a representative sample of the Iraqi population to conduct mortality surveys. [5] Sampling in this method can be quicker and more reliable than other methods, which is why this method is now used frequently.

Inference when the number of clusters is small

Cluster sampling methods can lead to significant bias when working with a small number of clusters. For instance, it can be necessary to cluster at the state or city level, units that may be small and fixed in number. Microeconometrics methods for panel data often use short panels, which is analogous to having few observations per clusters and many clusters. The small cluster problem can be viewed as an incidental parameter problem. [6] While the point estimates can be reasonably precisely estimated, if the number of observations per cluster is sufficiently high, we need the number of clusters

for the asymptotics to kick in. If the number of clusters is low the estimated covariance matrix can be downward biased. [7]

In the framework of the Moulton factor, an intuitive explanation of the small cluster problem can be derived from the formula for the Moulton factor. Assume for simplicity that the number of observation per cluster is fixed at n. Below,

stands for the covariance matrix adjusted for clustering,

The ratio on the left-hand side provides an indication of how much the unadjusted scenario overestimates the precision. Therefore, a high number means a strong downward bias of the estimated covariance matrix. A small cluster problem can be interpreted as a large n: when the data is fixed and the number of clusters is low, the number of data within a cluster can be high. It follows that inference when the number of clusters is small will not have correct coverage. [8]

Several solutions for the small cluster problem have been proposed. One can use a bias-corrected cluster-robust variance matrix, make T-distribution adjustments, or use bootstrap methods with asymptotic refinements, such as the percentile-t or wild bootstrap, that can lead to improved finite sample inference. [7] Cameron, Gelbach and Miller (2008) provide microsimulations for different methods and find that the wild bootstrap performs well in the face of a small number of clusters. [11]

In statistics, multistage sampling is the taking of samples in stages using smaller and smaller sampling units at each stage. 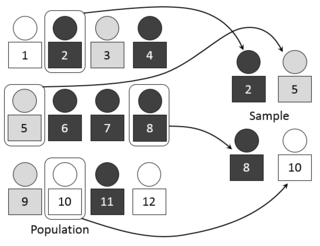 In statistics, quality assurance, and survey methodology, sampling is the selection of a subset of individuals from within a statistical population to estimate characteristics of the whole population. Statisticians attempt to collect samples that are representative of the population in question. Sampling has lower costs and faster data collection than measuring the entire population and can provide insights in cases where it is infeasible to sample an entire population. 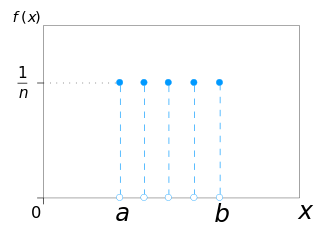 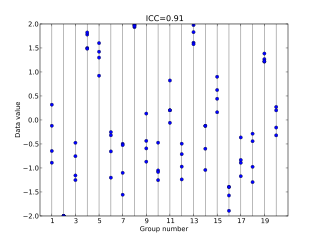 Forest inventory is the systematic collection of data and forest information for assessment or analysis. An estimate of the value and possible uses of timber is an important part of the broader information required to sustain ecosystems. When taking forest inventory the following are important things to measure and note: species, diameter at breast height (DBH), height, site quality, age, and defects. From the data collected one can calculate the number of trees per acre, the basal area, the volume of trees in an area, and the value of the timber. Inventories can be done for other reasons than just calculating the value. A forest can be cruised to visually assess timber and determine potential fire hazards and the risk of fire. The results of this type of inventory can be used in preventive actions and also awareness. Wildlife surveys can be undertaken in conjunction with timber inventory to determine the number and type of wildlife within a forest. The aim of the statistical forest inventory is to provide comprehensive information about the state and dynamics of forests for strategic and management planning. Merely looking at the forest for assessment is called taxation.

The Heckman correction is a statistical technique to correct bias from non-randomly selected samples or otherwise incidentally truncated dependent variables, a pervasive issue in quantitative social sciences when using observational data. Conceptually, this is achieved by explicitly modelling the individual sampling probability of each observation together with the conditional expectation of the dependent variable. The resulting likelihood function is mathematically similar to the tobit model for censored dependent variables, a connection first drawn by James Heckman in 1974. Heckman also developed a two-step control function approach to estimate this model, which avoids the computational burden of having to estimate both equations jointly, albeit at the cost of inefficiency. Heckman received the Nobel Memorial Prize in Economic Sciences in 2000 for his work in this field.

In various science/engineering applications, such as independent component analysis, image analysis, genetic analysis, speech recognition, manifold learning, and time delay estimation it is useful to estimate the differential entropy of a system or process, given some observations.

In statistics, the Horvitz–Thompson estimator, named after Daniel G. Horvitz and Donovan J. Thompson, is a method for estimating the total and mean of a pseudo-population in a stratified sample. Inverse probability weighting is applied to account for different proportions of observations within strata in a target population. The Horvitz–Thompson estimator is frequently applied in survey analyses and can be used to account for missing data, as well as many sources of unequal selection probabilities. 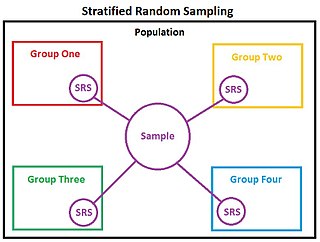 In statistics, stratified randomization is a method of sampling which first stratifies the whole study population into subgroups with same attributes or characteristics, known as strata, then followed by simple random sampling from the stratified groups, where each element within the same subgroup are selected unbiasedly during any stage of the sampling process, randomly and entirely by chance. Stratified randomization is considered a subdivision of stratified sampling, and should be adopted when shared attributes exist partially and vary widely between subgroups of the investigated population, so that they require special considerations or clear distinctions during sampling. This sampling method should be distinguished from cluster sampling, where a simple random sample of several entire clusters is selected to represent the whole population, or stratified systematic sampling, where a systematic sampling is carried out after the stratification process. Stratified random sampling is sometimes also known as "quota random sampling".