Last updated May 31, 2021
Measure of the joint variability
This article is about the degree to which random variables vary similarly. For other uses, see Covariance (disambiguation).

with finite second moments, the covariance is defined as the expected value (or mean) of the product of their deviations from their individual expected values: [3] [4] :p. 119

is the expected value of

, also known as the mean of

. The covariance is also sometimes denoted

, in analogy to variance. By using the linearity property of expectations, this can be simplified to the expected value of their product minus the product of their expected values:

but this equation is susceptible to catastrophic cancellation (see the section on numerical computation below).

The units of measurement of the covariance

Notice the complex conjugation of the second factor in the definition.

If the (real) random variable pair

can take on the values

, then the covariance can be equivalently written in terms of the means

It can also be equivalently expressed, without directly referring to the means, as [5]

More generally, if there are

but with possibly unequal probabilities

, then the covariance is

of the six hypothetical realizations

The variance is a special case of the covariance in which the two variables are identical (that is, in which one variable always takes the same value as the other): [4] :p. 121

are real-valued random variables and

are real-valued constants, then the following facts are a consequence of the definition of covariance:

of random variables in real-valued, and constants

A useful identity to compute the covariance between two random variables

is the Hoeffding's covariance identity: [7]

is the joint cumulative distribution function of the random vector

are independent random variables, then their covariance is zero. [4] :p. 123 [8] This follows because under independence,

The converse, however, is not generally true. For example, let

be uniformly distributed in

are not independent, but

In this case, the relationship between

is non-linear, while correlation and covariance are measures of linear dependence between two random variables. This example shows that if two random variables are uncorrelated, that does not in general imply that they are independent. However, if two variables are jointly normally distributed (but not if they are merely individually normally distributed), uncorrelatedness does imply independence.

Many of the properties of covariance can be extracted elegantly by observing that it satisfies similar properties to those of an inner product:

As a result, for random variables with finite variance, the inequality

holds via the Cauchy–Schwarz inequality.

The sample covariances among

observations of each, drawn from an otherwise unobserved population, are given by the

which is an estimate of the covariance between variable

, a vector whose jth element

is one of the random variables. The reason the sample covariance matrix has

in the denominator rather than

is essentially that the population mean

is not known and is replaced by the sample mean

. If the population mean

is known, the analogous unbiased estimate is given by

be a random vector with covariance matrix Σ, and let A be a matrix that can act on

on the left. The covariance matrix of the matrix-vector product A X is:

is the transpose of the vector (or matrix)

-th element of this matrix is equal to the covariance

between the i-th scalar component of

and the j-th scalar component of

is the transpose of

is prone to catastrophic cancellation if

are not computed exactly and thus should be avoided in computer programs when the data has not been centered before. [10] Numerically stable algorithms should be preferred in this case. [11]

In genetics and molecular biology

Covariance is an important measure in biology. Certain sequences of DNA are conserved more than others among species, and thus to study secondary and tertiary structures of proteins, or of RNA structures, sequences are compared in closely related species. If sequence changes are found or no changes at all are found in noncoding RNA (such as microRNA), sequences are found to be necessary for common structural motifs, such as an RNA loop. In genetics, covariance serves a basis for computation of Genetic Relationship Matrix (GRM) (aka kinship matrix), enabling inference on population structure from sample with no known close relatives as well as inference on estimation of heritability of complex traits.

Covariances play a key role in financial economics, especially in modern portfolio theory and in the capital asset pricing model. Covariances among various assets' returns are used to determine, under certain assumptions, the relative amounts of different assets that investors should (in a normative analysis) or are predicted to (in a positive analysis) choose to hold in a context of diversification.

In meteorological and oceanographic data assimilation

The covariance matrix is important in estimating the initial conditions required for running weather forecast models, a procedure known as data assimilation. The 'forecast error covariance matrix' is typically constructed between perturbations around a mean state (either a climatological or ensemble mean). The 'observation error covariance matrix' is constructed to represent the magnitude of combined observational errors (on the diagonal) and the correlated errors between measurements (off the diagonal). This is an example of its widespread application to Kalman filtering and more general state estimation for time-varying systems.

The covariance matrix is used to capture the spectral variability of a signal. [14]

In statistics and image processing

The covariance matrix is used in principal component analysis to reduce feature dimensionality in data preprocessing.

In probability theory and statistics, two real-valued random variables, , , are said to be uncorrelated if their covariance, , is zero. If two variables are uncorrelated, there is no linear relationship between them.

In statistics and signal processing, a minimum mean square error (MMSE) estimator is an estimation method which minimizes the mean square error (MSE), which is a common measure of estimator quality, of the fitted values of a dependent variable. In the Bayesian setting, the term MMSE more specifically refers to estimation with quadratic loss function. In such case, the MMSE estimator is given by the posterior mean of the parameter to be estimated. Since the posterior mean is cumbersome to calculate, the form of the MMSE estimator is usually constrained to be within a certain class of functions. Linear MMSE estimators are a popular choice since they are easy to use, easy to calculate, and very versatile. It has given rise to many popular estimators such as the Wiener–Kolmogorov filter and Kalman filter.

In statistics, an exchangeable sequence of random variables is a sequence X1, X2, X3, ... whose joint probability distribution does not change when the positions in the sequence in which finitely many of them appear are altered. Thus, for example the sequences

In probability theory and statistics, a cross-covariance matrix is a matrix whose element in the i, j position is the covariance between the i-th element of a random vector and j-th element of another random vector. A random vector is a random variable with multiple dimensions. Each element of the vector is a scalar random variable. Each element has either a finite number of observed empirical values or a finite or infinite number of potential values. The potential values are specified by a theoretical joint probability distribution. Intuitively, the cross-covariance matrix generalizes the notion of covariance to multiple dimensions. 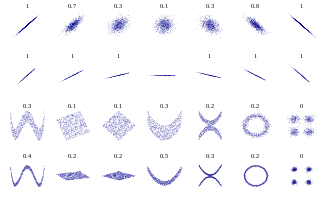