Along with the minimum and the maximum of the data, which are also quartiles, the three quartiles described above provide a five-number summary of the data. This summary is important in statistics because it provides information about both the center and the spread of the data. Knowing the lower and upper quartile provides information on how big the spread is and if the dataset is skewed toward one side. Since quartiles divide the number of data points evenly, the range is not the same between quartiles (i.e., Q3-Q2 ≠ Q2-Q1). While the maximum and minimum also show the spread of the data, the upper and lower quartiles can provide more detailed information on the location of specific data points, the presence of outliers in the data, and the difference in spread between the middle 50% of the data and the outer data points. [2]

For discrete distributions, there is no universal agreement on selecting the quartile values. [3]

This rule is employed by the TI-83 calculator boxplot and "1-Var Stats" functions.

The values found by this method are also known as "Tukey's hinges"; [4] see also midhinge.

If we have an ordered dataset

, we can interpolate between data points to find the

quantile. If we denote the integer part of a number

, then the empirical quantile function is given by,

To find the first, second, and third quartiles of the dataset we would evaluate

As there are an even number of data points, the first three methods all give the same results.

If we define a continuous probability distributions as

is a real valued random variable, its cumulative distribution function (CDF) is given by,

The CDF gives the probability that the random variable

is less than the value

. Therefore, the first quartile is the value of

, the second quartile is

, and the third quartile is

can be found with the quantile function

for the first quartile,

for the second quartile, and

There are methods by which to check for outliers in the discipline of statistics and statistical analysis. Outliers could be a result from a shift in the location (mean) or in the scale (variability) of the process of interest. [6] Outliers could also may be evidence of a sample population that has a non-normal distribution or of a contaminated population data set. Consequently, as is the basic idea of descriptive statistics, when encountering an outlier, we have to explain this value by further analysis of the cause or origin of the outlier. In cases of extreme observations, which are not an infrequent occurrence, the typical values must be analyzed. In the case of quartiles, the Interquartile Range (IQR) may be used to characterize the data when there may be extremities that skew the data; the interquartile range is a relatively robust statistic (also sometimes called "resistance") compared to the range and standard deviation. There is also a mathematical method to check for outliers and determining "fences", upper and lower limits from which to check for outliers.

After determining the first and third quartiles and the interquartile range as outlined above, then fences are calculated using the following formula:

where Q1 and Q3 are the first and third quartiles, respectively. The lower fence is the "lower limit" and the upper fence is the "upper limit" of data, and any data lying outside these defined bounds can be considered an outlier. Anything below the Lower fence or above the Upper fence can be considered such a case. The fences provide a guideline by which to define an outlier, which may be defined in other ways. The fences define a "range" outside which an outlier exists; a way to picture this is a boundary of a fence, outside which are "outsiders" as opposed to outliers. It is common for the lower and upper fences along with the outliers to be represented by a boxplot. For a boxplot, only the vertical heights correspond to the visualized data set while horizontal width of the box is irrelevant. Outliers located outside the fences in a boxplot can be marked as any choice of symbol, such as an "x" or "o". The fences are sometimes also referred to as "whiskers" while the entire plot visual is called a "box-and-whisker" plot.

When spotting an outlier in the data set by calculating the interquartile ranges and boxplot features, it might be simple to mistakenly view it as evidence that the population is non-normal or that the sample is contaminated. However, this method should not take place of a hypothesis test for determining normality of the population. The significance of the outliers vary depending on the sample size. If the sample is small, then it is more probable to get interquartile ranges that are unrepresentatively small, leading to narrower fences. Therefore, it would be more likely to find data that are marked as outliers. [7]

The Excel function QUARTILE(array, quart) provides the desired quartile value for a given array of data. In the Quartile function, array is the dataset of numbers that is being analyzed and quart is any of the following 5 values depending on which quartile is being calculated. [8]

In order to calculate quartiles in Matlab, the function quantile(A,p) can be used. Where A is the vector of data being analyzed and p is the percentage that relates to the quartiles as stated below. [9]

In statistics and probability, quantiles are cut points dividing the range of a probability distribution into continuous intervals with equal probabilities, or dividing the observations in a sample in the same way. There is one fewer quantile than the number of groups created. Thus quartiles are the three cut points that will divide a dataset into four equal-sized groups. Common quantiles have special names: for instance quartile, decile. The groups created are termed halves, thirds, quarters, etc., though sometimes the terms for the quantile are used for the groups created, rather than for the cut points.

The interquartile mean (IQM) is a statistical measure of central tendency based on the truncated mean of the interquartile range. The IQM is very similar to the scoring method used in sports that are evaluated by a panel of judges: discard the lowest and the highest scores; calculate the mean value of the remaining scores.

In descriptive statistics, a box plot or boxplot is a method for graphically depicting groups of numerical data through their quartiles. Box plots may also have lines extending from the boxes (whiskers) indicating variability outside the upper and lower quartiles, hence the terms box-and-whisker plot and box-and-whisker diagram. Outliers may be plotted as individual points. Box plots are non-parametric: they display variation in samples of a statistical population without making any assumptions of the underlying statistical distribution. The spacings between the different parts of the box indicate the degree of dispersion (spread) and skewness in the data, and show outliers. In addition to the points themselves, they allow one to visually estimate various L-estimators, notably the interquartile range, midhinge, range, mid-range, and trimean. Box plots can be drawn either horizontally or vertically. Box plots received their name from the box in the middle.

The five-number summary is a set of descriptive statistics that provides information about a dataset. It consists of the five most important sample percentiles:

In statistics, a Q–Q (quantile-quantile) plot is a probability plot, which is a graphical method for comparing two probability distributions by plotting their quantiles against each other. First, the set of intervals for the quantiles is chosen. A point (x, y) on the plot corresponds to one of the quantiles of the second distribution plotted against the same quantile of the first distribution. Thus the line is a parametric curve with the parameter which is the number of the interval for the quantile.

The root-mean-square deviation (RMSD) or root-mean-square error (RMSE) is a frequently used measure of the differences between values predicted by a model or an estimator and the values observed. The RMSD represents the square root of the second sample moment of the differences between predicted values and observed values or the quadratic mean of these differences. These deviations are called residuals when the calculations are performed over the data sample that was used for estimation and are called errors when computed out-of-sample. The RMSD serves to aggregate the magnitudes of the errors in predictions for various times into a single measure of predictive power. RMSD is a measure of accuracy, to compare forecasting errors of different models for a particular dataset and not between datasets, as it is scale-dependent.

It is also called the percent-point function or inverse cumulative distribution function.

In statistics, the midhinge is the average of the first and third quartiles and is thus a measure of location. Equivalently, it is the 25% trimmed mid-range or 25% midsummary; it is an L-estimator.

In statistics, an L-estimator is an estimator which is an L-statistic – a linear combination of order statistics of the measurements. This can be as little as a single point, as in the median, or as many as all points, as in the mean.

In statistics, a robust measure of scale is a robust statistic that quantifies the statistical dispersion in a set of numerical data. The most common such statistics are the interquartile range (IQR) and the median absolute deviation (MAD). These are contrasted with conventional measures of scale, such as sample variance or sample standard deviation, which are non-robust, meaning greatly influenced by outliers.

In statistical graphics and scientific visualization, the contour boxplot is an exploratory tool that has been proposed for visualizing ensembles of feature-sets determined by a threshold on some scalar function. Analogous to the classical boxplot and considered an expansion of the concepts defining functional boxplot, the descriptive statistics of a contour boxplot are: the envelope of the 50% central region, the median curve and the maximum non-outlying envelope. 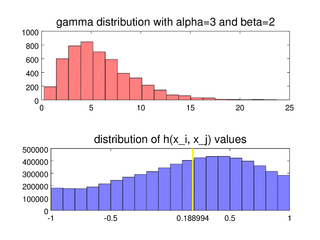