Puan Sri Tiara Jacquelina Eu Effendi is a Malaysian actress, film producer, musical theater producer, singer, and the founder of The Enfiniti Academy of Musical Theatre and Performing Arts. She is well-acclaimed for her role in Puteri Gunung Ledang , the biggest budget movie ever produced in Malaysia up until 2005, [1] in which she played the lead character and sang the theme song, "Asmaradana". Aside from appearing on stage and on camera, Tiara Jacquelina also serves as the managing director of Enfiniti Vision Media, a Malaysian arts, entertainment, and television production company.

Jacquelina was born as Jacqueline Eu in October 1967 in Kuala Lumpur, Malaysia to a Burmese Chinese father and Indonesian Chinese mother.

She began her film career in 1988. In 1995, Jacquelina co-starred with Academy Award winner, Frances McDormand, who played the lead role in the movie, Beyond Rangoon . In the 12th Malaysia Film Festival later that year, she won the Best Actress Award [2] for her role in the film Ringgit Kasorrga, a social drama concerning a sex scandal involving a politician and young models. In 2004, she played the title character, a legendary Javanese princess in Puteri Gunung Ledang , which gained her recognition. [3] The movie was submitted for the Best Foreign Language Film category at the Academy Awards in 2004 but was not nominated. [4]

Following the success of the film, [5] she later staged it as a musical at Istana Budaya in 2006 with the title, Puteri Gunung Ledang: The Musical .

Recently, in March 2018, Jacquelina adapted and directed Ola Bola: The Musical, a theatrical musical that was staged at Istana Budaya and has received positive reviews from both the media and its viewers. [6] The musical was staged after the movie, Ola Bola , after marking its success in Malaysian cinematography in 2016 where the story revolves around the history of Malaysian national football team in their journey of paving their way into the 1980 Summer Olympics.

Jacquelina converted to Islam in 1993 and was previously married to actor and celebrity Hani Mohsin, from 1993 until they divorced in 1998. She is the mother of two children, Hani Karmila and Mohd Eridani.

She later married Sarawak ian businessman Mohd Effendi Norwawi, who also formerly served as a senator and Minister in the Prime Minister's Department.

Puteri Gunung Ledang is a 2004 Malaysian epic fantasy period film directed by Saw Teong Hin. The film is based on the Malay legend of the Gunung Ledang princess, who is said to have lived on top of Gunung Ledang, and a Malaccan sultan's effort to court her. The film stars Tiara Jacquelina, M. Nasir and Adlin Aman Ramlie.

The Istana Budaya or also known as the Palace of Culture, is Malaysia's main venue for all types of theatre including musical theatre, operetta, classical concerts and opera from local and international performances. It is located in the heart of Kuala Lumpur city, next to the National Art Gallery.

Hikayat Hang Tuah is a Malay work of literature that tells the tale of the legendary Malay warrior, Hang Tuah and his four warrior friends - Hang Jebat, Hang Kasturi, Hang Lekir and Hang Lekiu - who lived during the height of the Sultanate of Malacca in the 15th century. The author is unknown, however, it has been accepted that it was written and rewritten by several different authors from different time periods in history with the aim to improvise the tale to fit the society at that certain periods of time.

The legend revolves around a celestial princess who lived on Mount Ledang, located in present-day Tangkak District, Johor, Malaysia. 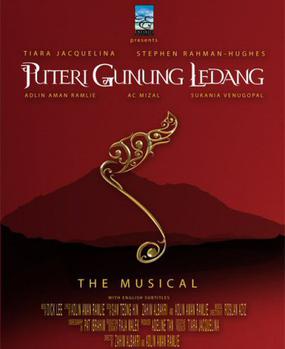 Puteri Gunung Ledang is a Malaysian musical directed by Zahim Albakri, co-directed by Adlin Aman Ramlie, book by Adlin Aman Ramlie, Saw Teong Hin and Zahim Al-Bakri and music composed by Dick Lee. The musical is based on the 2004 Puteri Gunung Ledang film. The original production was staged at the Istana Budaya in February 2006, this was followed by two more productions and an upcoming third in February 2009. Tiara Jacquelina and Stephen Rahman-Hughes starred as Gusti Putri and Hang Tuah in all the productions to date. Other members of the production team are music director Roslan Aziz, choreographer Pat Ibrahim and production designer Raja Malek. The musical was staged in poetic Malay and Javanese-accented Malay, but English subtitles were provided.

Shanon Shah, is a singer-songwriter, playwright and academic from Malaysia. He released two albums Dilanda Cinta (2005) and Suara Yang Ku Dengar (2010) on the InterGlobal Music Malaysia independent label. He is noted for his emotive voice and cabaret-style piano playing.

Tan Sri Datuk Seri Mohd Effendi bin Norwawi is a Malaysian politician, businessman and administrator. He has previously served as a Sarawak State Assemblyman (1991–1999), the Minister of Agriculture (1999–2004) and a Senator for the Upper House of Parliament or Dewan Negara (2006–2011).

Puteri Gunong Ledang is a 1961 Malay period film directed by S. Roomai Noor and based on the Legend of Puteri Gunung Ledang. The film introduces actress Elaine Edley in her first film role.

So You Think You Can Dance is a dance reality show and competition aired on 8TV. Premiered on 5 April 2007, it is based on the original United States version of the same name. It has a similar premise to the American Idol series of singing competitions, with nationwide auditions leading to the discovery of the next big star. 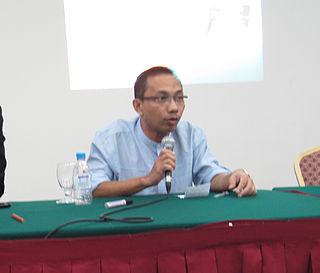 Joanna Bessey is an actress and director from Malaysia. She is best known for her role as Marie Tan in the situation comedy Kopitiam which ran for 7 seasons.

Khadijah Hashim is a Malaysian writer, teacher and journalist. She has worked as a teacher and also as a journalist with local newspapers Utusan Melayu (1974–1976) and Berita Harian (1976–1985). She is better known as a novelist, and has produced 19 novels. She also expanded her creativity in the field of short stories, radio drama scripts, children's books, rhymes and poetry. The children's rhyme book "Sayang Sayang" has been selected to be on Honour List of the International Board on Books for Young People (IBBY) in Basel, Switzerland (2002) and "Semerbak Poetry" in Macau, China (2006). Khadijah continues her interests in writing rhymes, which led to her latest creation of "Putera-puteri Malaysia".

Malaysia Film Festival is an accolade bestowed by the Malaysian Entertainment Journalists Association of Malaysia for the appreciation and honouring the products of film arts and artists. The formal ceremony at which the awards are presented is one of the most prominent award ceremonies and the highlights for the film industry in Malaysia and is televised live on local television, annually. It is considered to be Malaysia's own equivalent to the Academy Awards and it is one of the major annual awards presented in Malaysia, alongside the Anugerah Bintang Popular for the entire entertainment industry, and Anugerah Industri Muzik for the music industry.

The Secret Life of Nora is a Malaysian musical produced by Enfiniti (M) Sdn Bhd, with Tiara Jacquelina as Executive Producer, story by Raymond Miranda, directed by Steven Dexter and choreographed by Pat Ibrahim.

Cempaka Schools is a private school in Malaysia that offers Early Years Education, the Primary & Secondary Malaysian and International curriculum, the International Baccalaureate Diploma Programme, and the A-Level for students aged from 18 months to 18 years old.

Ola Bola is a 2016 Malaysian sports football film directed by Chiu Keng Guan. The film was inspired by the glories of the Malaysia national football team which successfully entered the 1980 Summer Olympics. The film was released in Malaysian cinemas on 28 January 2016. As of November 2019, Ola Bola is currently ranked the tenth-highest grossing Malaysian film of all-time.

Krishen Jit a/l Amar Singh was a Malaysian author, playwright and theatre director and critic remembered as a Malaysian theatre icon. He was a co-founder of Five Arts Center with his wife, Marion D’ Cruz and other artists including Chin San Sooi and Redza Piyadasa in 1984. Jit also worked as the acting coach for the 2004 film Puteri Gunung Ledang directed by Saw Teong Hin starring M. Nasir and Tiara Jacquelina. He died on 28 April 2005 at the University Malaya Medical Centre (PPUM) at the age of 65 after a long battle with stroke.

Douglas Lim is a Malaysian actor, comedian, television presenter and emcee. He is well known for his involvement in local television, theater and film and comedy show.

Al Jafree Md Yusop is a Malaysian writer and director of TV and feature films.