Tiberius Claudius Paulinus was a Roman general and politician of the early third century.

Several inscriptions in Britain preserve details of his cursus honorum . The earliest office Paulinus held was legatus or commander of Legio II Augusta at Caerleon. After an unknown period of time, he was proconsular governor of Gallia Narbonensis for the term 216/217; this was followed by legatus Augusti pro praetor, or governorship of the imperial province of Gallia Lugdunensis around 218. He returned to Roman Britain where he served as legatus Augusti pro praetor of Britannia Inferior in 220. [1]

He was a popular man. While he was away governing Gaul, the Silures tribe set up an official monument, the Marble of Thorigny dedicated to him despite their usual hostility to Rome. This monument includes the text of a letter Paulinus sent to his friend, Sennius Sollemnis. [2] By 221, he had been succeeded in Britain by Marius Valerianus.

Gnaeus Julius Agricola was a Roman Italo-Gallic general responsible for much of the Roman conquest of Britain. Written by his son-in-law Tacitus, the De vita et moribus Iulii Agricolae is the primary source for most of what is known about him, along with detailed archaeological evidence from northern Britain.

A legatus was a high-ranking Roman military officer in the Roman Army, equivalent to a modern high-ranking general officer. Initially used to delegate power, the term became formalised under Augustus as the officer in command of a legion.

Gaius Junius Faustinus Postumianus was a Roman senator who flourished in the third century. He is known from an inscription found near Thugga erected by his son Placidus and daughter Paulina. He held a number of appointments, most importantly as praeses (governor) in Hispania Tarraconensis and Britain. The date of his appointment is unclear, so the province may have been either Britannia Superior or the undivided province of Roman Britain.

Lucius Fabius Cilo, full name Lucius Fabius Cilo Septiminus Catinius Acilianus Lepidus Fulcinianus, was a Roman senator, who was a confidant of Septimius Severus. He held a number of appointments that have been dated to the reigns of Commodus and Severus. He was twice Roman consul: the first time in 193 as a suffect, and the second time as ordinary consul in 204 with Marcus Annius Flavius Libo as his colleague. Cilo is known from numerous inscriptions and appears in the Historia Augusta and the history of Dio Cassius. He married Cilonia Fabia. 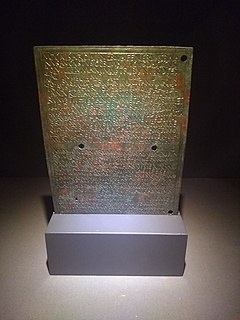 Gaius Julius Quadratus Bassus was a Roman senator and general. He rose from provincial aristocratic origins to occupy the highest offices of Rome. He served as a legionary commander and as imperial governor of Judea, Cappadoccia, Galatia, Syria and Dacia. He is known to have been active under Trajan in the Dacian and Parthian Wars. Bassus was suffect consul in the nundinium of May to August 105 with Gnaeus Afranius Dexter as his colleague.

A legatus Augusti pro praetore was the official title of the governor or general of some imperial provinces of the Roman Empire during the Principate era, normally the larger ones or those where legions were based. Provinces were denoted imperial if their governor was selected by the emperor, in contrast to senatorial provinces, whose governors were elected by the Roman Senate.

Gaius Vettius Sabinianus Julius Hospes was a Roman military officer and senator. He was born into the equestrian order, possibly in North Africa. He held the traditional series of military, administrative and judicial positions of steadily increasing responsibility which aspiring upper class Romans were expected to progress through, known as the cursus honorum. He had a long and distinguished military and political career under the reigns of the emperors Antoninus Pius, Marcus Aurelius and Commodus.

Quintus Hedius Rufus Lollianus Gentianus was a Roman military officer and senator who was appointed consul suffectus in around AD 186–188.

Lucius Virius Lupus Iulianus was a Roman military officer and senator who served as consul ordinarius in 232 alongside Lucius Marius Maximus.

Lucius Aemilius Carus was a Roman military officer and senator who served as consul suffectus for one of the nundinia in the first half of AD 144, with Quintus Egrilius Plarianus as his colleague. His life is known primarily through inscriptions.

Lucius Burbuleius Optatus Ligarianus was a Roman senator of the second century, who held several offices in the emperor's service. He was suffect consul in the nundinium of May-August 135 as the colleague of Marcus Aemilius Papus. He died while governor of Syria.

Marcus Pontius Laelianus Larcius Sabinus was a Roman senator and general who held a series of offices in the emperor's service. He was suffect consul for the nundinium of July-August 145 as the colleague of Quintus Mustius Priscus. Laelianus is primarily known through inscriptions.

Marcus Titius Lustricus Bruttianus was a Roman senator and general of the early 2nd century AD. He was suffect consul in the nundinium of September to December 108 as the colleague of Quintus Pompeius Falco. Until the discovery of an inscription bearing a list of the offices he held, all that was known about him was the year of his consulate and an anecdote forming the subject of one of Pliny the Younger's letters.

Gaius Julius Proculus was a Roman senator, who held a number of imperial appointments during the reign of Trajan. He was suffect consul in the nundinium of May to August 109 as the colleague of Gaius Aburnius Valens. He is known entirely from inscriptions. Anthony Birley notes there is a plausible possibility that Proculus also held a second suffect consulate; any man recorded as holding a second consulate after AD 103, held it as an ordinary consul, not as a suffect consul.

Titus Caesernius Quinctianus was a Roman senator who held a number of appointments in the Imperial service during the reigns of Hadrian and Antoninus Pius. He was suffect consul in an undetermined nundinium around the year 138. His full name was Titus Caesernius Statius Quinctius Macedo Quinctianus.

Publius Metilius Secundus was a Roman senator, who was active during the reign of Hadrian. He was suffect consul in one of the earlier nundinia of 123 as the colleague of Titus Prifernius Geminus. He is known entirely from inscriptions.

Lucius Aninius Sextius Florentinus was a Roman senator, who held a number of imperial appointments during the reigns of Trajan and Hadrian. He died while governing Roman Arabia; his unnamed son had a tomb prepared for him at Petra, which still stands.

Lucius Julius Julianus was a legatus legionis of the Legio II Augusta and a Roman praetor.