The Caerleon Roman Fortress and Baths museum (Welsh : Caer a Baddonau Rhufeinig Caerllion Amgueddfa) is a historical site located in the town of Caerleon, South Wales. Near to the city of Newport, it is run by the Welsh historic environment service Cadw.

Roman Wales was the farthest point west that the Roman Empire in Roman Britain extended to, and as a defence point, the fortress at Caerleon built in AD 75 was one of only three permanent Roman Legionary fortresses in Roman Britain. It was occupied and operational for just over 200 years.

The site of the baths was excavated in the late 1970s, and a curator was appointed in 1980 when the site was opened to the public. [1]

The Roman Baths Museum lies inside what remains of the fortress of Isca Augusta close to the National Roman Legion Museum. The baths museum has a covered walkway over part of the remains of the military bath house. There was a frigidarium, tepidarium and caldarium, as well as an open-air swimming pool. [2]

Usk is a town and community in Monmouthshire, Wales, 10 miles (16 km) northeast of Newport. 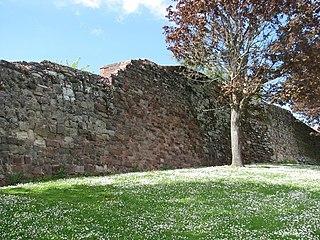 Isca Dumnoniorum, also known simply as Isca, was a town in the Roman province of Britannia at the site of present-day Exeter in the English county of Devon in the United Kingdom. It served as the tribal capital of the Dumnonians under and after the Romans. The city walls of Exeter mark the former perimeter of Isca and excavations in the 1970s and 1980s verified that the town was home to a Roman fortress almost certainly for the Second Augustan Legion. The town seems to have grown up around this fort but seems to have gone into decline prior to the Roman withdrawal from Britain c. 410.

Aileen Mary Fox, Lady Fox, FSA, was an English archaeologist. She specialised in the archaeology of South West England, notably excavating the Roman legionary fortress in Exeter in Devon after World War II.

Deva Victrix, or simply Deva, was a legionary fortress and town in the Roman province of Britannia on the site of the modern city of Chester. The fortress was built by the Legio II Adiutrix in the AD 70s as the Roman army advanced north against the Brigantes, and rebuilt completely over the next few decades by the Legio XX Valeria Victrix. In the early 3rd century the fortress was again rebuilt. The legion probably remained at the fortress until the late 4th or early 5th century, upon which it fell into disuse. 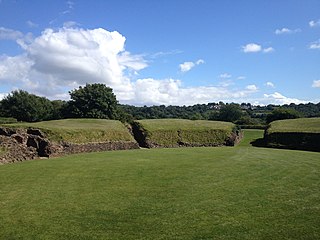 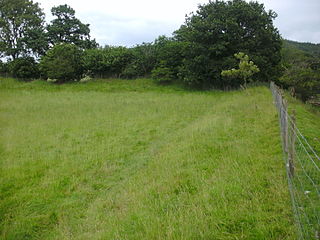 Y Gaer is a Roman fort situated near modern-day Brecon in Mid Wales, United Kingdom. Y Gaer is located at grid reference SO00332966. 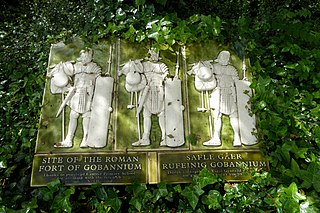 Gobannium was a Roman fort and civil settlement or Castra established by the Roman legions invading what was to become Roman Wales and lies today under the market town of Abergavenny, Monmouthshire in south east Wales. 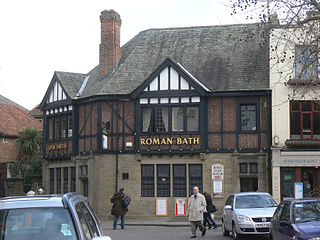 The Roman Bath is a public house in York, England, built above an ancient Roman bath house. The remains were uncovered during building work when the present pub was erected in 1929-31 replacing an inn. The exterior has Tudor Revival features including applied half-timbering. The pub is however more notable for the Roman remains which can be viewed inside.

The AdmiralCity of Newport Half Marathon is an annual half marathon race held in the Welsh city of Newport, Wales, taking place in March. The event was established in 2013, organised by the charity St. Davids Hospice Care.

The Tour de Gwent is an annual 6-route cycling event which begins in Caerleon, and follows a route through Newport and Monmouthshire. The event takes place in April each year. 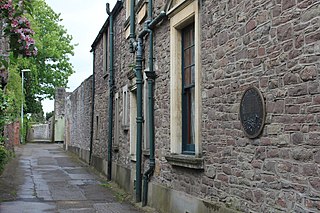 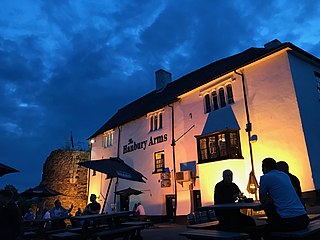 The Archaeology of Wales is the study of human occupation within the country of Wales, which has been occupied by modern humans since 225,000 BCE, with continuous occupation from 9,000 BCE.. Analysis of the sites, artifacts and other archaeological data within Wales details its complex social landscape and evolution from Prehistoric times to the Industrial period. This study is undertaken by academic institutions, consultancies, charities as well as government organisations.