Allt-yr-yn (Welsh : Allt-yr-ynn) is a suburb of the city of Newport, south-east Wales.

Welsh ; [kʰəmˈraiɡ](listen)) or y Gymraeg is a Brittonic language of the Celtic branch of the Indo-European language family. It is spoken natively in Wales, by some in England, and in Y Wladfa. Historically, it has also been known in English as 'British', 'Cambrian', 'Cambric' and 'Cymric'.

Wales is a country that is part of the United Kingdom. It is bordered by England to the east, the Irish Sea to the north and west, and the Bristol Channel to the south. It had a population in 2011 of 3,063,456 and has a total area of 20,779 km2 (8,023 sq mi). Wales has over 1,680 miles (2,700 km) of coastline and is largely mountainous, with its higher peaks in the north and central areas, including Snowdon, its highest summit. The country lies within the north temperate zone and has a changeable, maritime climate.

Pronounced by English-speaking locals as "Olt-er-reen", the spelling should include two Ns at the end, as "Allt-yr-ynn". The name means "The slope (allt) of the ash trees (ynn which is the plural of onnen – ash tree)" in Welsh.

Allt-yr-yn forms an electoral ward (district) and coterminous community (parish) of the city. It is mainly residential and contains many large houses built in the early part of the 20th century. Some of the district is built upon the Ridgeway, Newport, with some of the ward offering views of surrounding areas such as Twmbarlwm. The area is governed by the Newport City Council. 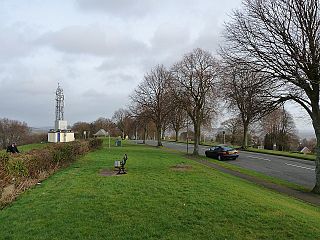 Ridgeway is an area in Newport, Wales, in the suburb and electoral ward and coterminous community parish of Allt-yr-yn. It is well known for its ridge which overlooks Rogerstone and the nearby woodland areas. Ridgeway is at the end of the estate the main road breaks off onto the M4 motorway.

Twmbarlwm also known as Twm Barlwm, Twyn Barlwm, or locally known as "The twmp" or the Pimple because of the mound that lies at its summit, is a hill situated 2 km (1.2 mi) to the northeast of Risca in South Wales. It is often mistakenly referred to as a mountain but is actually a hill due to being under 600m. It is 419 m (1,375 ft) high and is a well-known landmark throughout the region. It commands extensive views across what is now the M4 corridor, over Newport and Cwmbran - with part of it coming into Cwmbran - and out over the Bristol Channel.

Towards the City Centre, Allt-yr-yn is home to the offices of Newport City Council, at the Civic Centre, of which its clock tower can be seen for miles around. 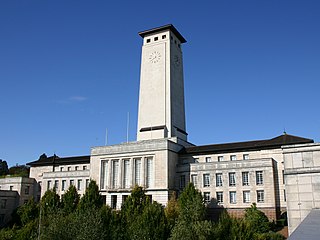 Newport City Council is the governing body for the city of Newport, one of the subdivisions of Wales within the United Kingdom. It consists of 50 councillors, representing the city's 20 wards.

Newport Civic Centre is the seat of government for the city of Newport, South Wales and is a Grade II* Listed building in the Art Deco style. Newport City Council has its main offices located in the building which also includes a Crown Court complex. The Mayor's office is located in the Civic Centre.

University of Wales, Newport had a campus located in Allt-yr-yn. It served as the university's Science, IT and Business faculty. before moving to a site with a new £35 million complex on the banks of the River Usk in central Newport. The new campus formally opened in January 2011. [2] Initially the new campus will house the Newport Business School and design, film and media elements of the Newport School of Art, Media and Design. 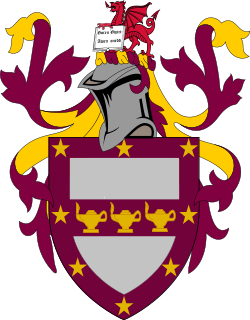 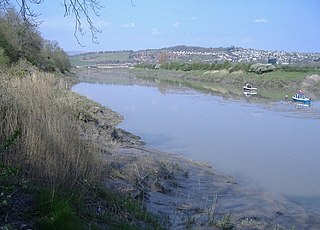 On the west side of Allt-yr-yn heights there is a Local Nature Reserve containing ancient woodland, meadows and five ponds. Between 1934 and the mid-1960s this was home to an open-air swimming baths, [3] and is now managed by a volunteer group known as WING – Wildlife in Newport Group. The nature reserve borders the Crumlin Arm of the Monmouthshire and Brecon Canal which runs parallel to the M4 Motorway at Allt-yr-yn. Lock 2 has been restored by volunteers and work has started on lock 3. Lock 1 disappeared under road works in Newport early in the 20th century. [4] 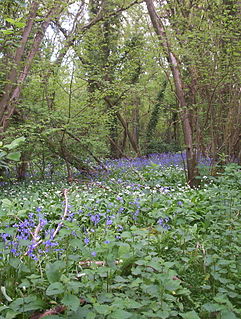 In the United Kingdom, an ancient woodland is a woodland that has existed continuously since 1600 or before in England, Wales and Northern Ireland. Planting of woodland was uncommon before those dates, so a wood present in 1600 is likely to have developed naturally.

A permanent military presence was established in the area with the completion of the Cavalry Barracks in 1845. [5]

There was once a hospital in the ward, but this was deemed surplus to requirements and the site is now the Allt-yr-yn Heights estate. 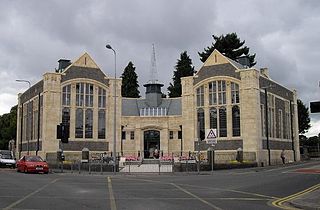 Cathays ( ka-TAYZ; is a district and community in the centre of Cardiff, capital of Wales. It is an old suburb of Cardiff established in 1875. It is very densely populated and contains many older terraced houses giving it a Victorian era atmosphere. The area falls into the Cathays ward.

Newport West is a parliamentary constituency in the House of Commons of the Parliament of the United Kingdom, represented by Ruth Jones. It elects one Member of Parliament (MP) using the first-past-the-post voting system. Paul Flynn, of the Labour Party, was the MP from the 1987 general election until his death on 17 February 2019. A by-election was held in the constituency on Thursday 4 April.

Talybont-on-Usk is a village and community in Powys, Wales, in the historic county of Brecknockshire (Breconshire). It lies on both the River Caerfanell and the Monmouthshire and Brecon Canal. It had a population in 2001 of 743, reducing to 719 at the 2011 Census.

Langstone is an electoral ward and smaller village and community of the city of Newport, Wales. The area is governed by the Newport City Council.

Cat's Ash is a small hamlet to the east of the city centre of the city of Newport, South East Wales. 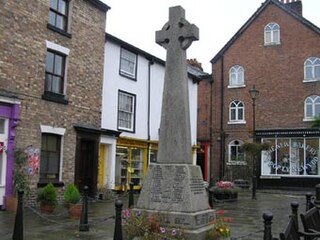 Llanfyllin is a small market town, community and electoral ward in a sparsely-populated area in Montgomeryshire, Powys, Wales. Llanfyllin's population in 2011 was 1,532, of whom 34.1% could speak Welsh. Llanfyllin means church or parish (llan) of St Myllin. 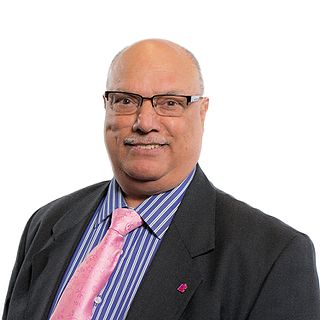 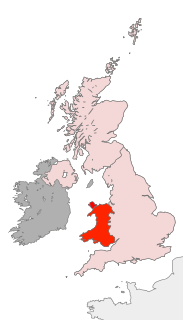 Scouting in Wales is largely represented by ScoutsCymru, a branch of the Scout Association of the United Kingdom, although some groups of the Baden-Powell Scouts' Association also operate there.

Raglan Barracks is a military installation at Barrack Hill in Allt-yr-yn in Newport, Wales.

Barrack Hill is an area in Newport, Wales, in the suburb and electoral ward and coterminous community parish of Allt-yr-yn. It is most well known for its canal paths and most prominently the Raglan Barracks which sits on the top of the hill. Raglan Barracks is used for army training and is where the Newport army cadets are situated.