Ticketclever (styled as ticketclever) was an online retail website/online shopping for train tickets for services in the United Kingdom. Ticketclever created an algorithm that sought numerous ticket combinations from the hundreds of millions of different route combinations and packages them together for a given journey. [1]

Ticketclever was based in Oxford with offices in London and Cape Town. [2]

Global Travel Ventures Ltd. (GTV) had been developing TicketClever (initially called FareMaster) since 2014. Ticketclever.com was launched in January 2017. [3] Jeremy Acklam, previously from Trainline was the co-founder and CEO. In March 2017, ticketclever announced they were partnering with the charity St John Ambulance, where you could donate an amount to the charity once you purchase a train ticket. GTV sold a 20% stake of the company to train operating company Stagecoach Group in June 2017. [4] Account-based version of ticketclever - also known as MultiPass - was conceived and developed by TEDIPAY (UK) Ltd, headed by its Founder and CEO, Alexander Peschkoff.

Ticketclever tried to use analytics and data science to try and find the lowest price. [5] Ticketclever employed three Oxford University alumni, two with Doctor of Philosophy in Particle Physics, one with a Doctor of Philosophy in Engineering Science to create an algorithm that filters data sets from the Rail Delivery Group, which represent 25 train operating companies in Great Britain that are responsible for running trains and setting the price of the fares. Ticketclever used this algorithm to find multi-ticket fare deals on Great Britain’s railway network.

Ticketclever was able to issue refunds in accordance with the National Rail Conditions of Travel if the circumstances allowed for a refund. The eligibility to change or cancel tickets varied depending on the type of ticket purchased. [6] Companies could choose to charge an administration fee of up to £10 according to the National Rail Conditions of Carriage for refunds. [7]

National Rail (NR) in Great Britain is the trading name licensed for use by the Rail Delivery Group, an unincorporated association whose membership consists of the passenger train operating companies (TOCs) of England, Scotland, and Wales. The TOCs run the passenger services previously provided by the British Railways Board, from 1965 using the brand name British Rail. Northern Ireland, which is bordered by the Republic of Ireland, has a different system. National Rail services share a ticketing structure and inter-availability that generally do not extend to services which were not part of British Rail.

Nederlandse Spoorwegen is the principal passenger railway operator in the Netherlands. It is a Dutch state-owned company founded in 1938. The Dutch rail network is one of the busiest in the European Union, and the third busiest in the world after Switzerland and Japan. 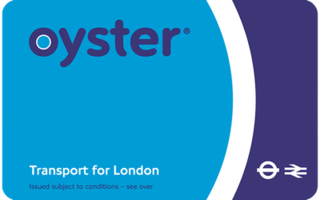 The Oyster card is a payment method for public transport in London in England, United Kingdom. A standard Oyster card is a blue credit-card-sized stored-value contactless smart card. It is promoted by Transport for London (TfL) and can be used on travel modes across London including London Buses, London Underground, the Docklands Light Railway (DLR), London Overground, Tramlink, some river boat services, and most National Rail services within the London fare zones. Since its introduction in June 2003, more than 86 million cards have been used.

The Travelcard is an inter-modal travel ticket for unlimited use on the London Underground, London Overground, Elizabeth line, Docklands Light Railway, London Trams, London Buses and National Rail services in the Greater London area. Travelcards can be purchased for a period of time varying from one day to a year, from Transport for London, National Rail and their agents. Depending on where it is purchased, and the length of validity, a Travelcard is either printed on a paper ticket with a magnetic stripe or encoded onto an Oyster card, Transport for London's contactless electronic smart card. The cost of a Travelcard is determined by the area it covers and, for this purpose, London is divided into a number of fare zones. The Travelcard season ticket for unlimited travel on London Buses and the London Underground was launched on 22 May 1983 by London Transport. One Day Travelcards and validity on other transport modes were added from 1984 onwards. The introduction of the Travelcard caused an increase in patronage and reduced the number of tickets that needed to be purchased by passengers.

National Express is an intercity and Inter-regional coach operator providing services throughout Great Britain. It is a subsidiary of National Express Group. Most services are subcontracted to local coach companies. The company's head office is in offices above Birmingham Coach Station.

A travel class is a quality of accommodation on public transport. The accommodation could be a seat or a cabin for example. Higher travel classes are designed to be more comfortable and are typically more expensive.

Megatrain is a provider of low-cost train travel in the United Kingdom. A subsidiary of the Stagecoach Group, its operations have been associated with its parent's East Midlands Trains, South West Trains, Virgin CrossCountry and Virgin Trains West Coast train operating companies. Even though Stagecoach ceased operating train franchises in its own right in August 2019, Megatrain services continue to operate on East Midlands Railway services. 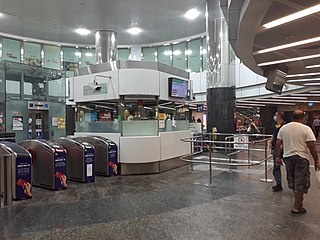 There is no single 'discount railcard' available on the UK railway network. In addition to the large number and variety of short-term or localised promotional fares that have been available to passengers on the British railway network in recent decades, there are many permanent concessionary fare schemes available to passengers. Some of these take the form of Railcards, which can be purchased by people who qualify according to the conditions, and which give discounts for all journeys over a period; other concessions are available for individual journeys. In all cases, details of the type of concession will be printed on the passenger's travel ticket, to distinguish reduced-rate tickets from those sold at the standard full fare. 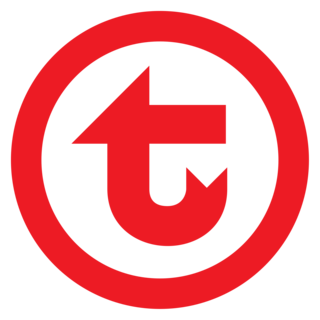 The 16–25 Railcard is an annual card giving discounts on certain types of railway ticket in Britain. It is available to anybody aged between 16 and 25 (inclusive), and certain mature students aged 26 and above, and is currently priced at £30.00. There is no restriction on the number of times the Railcard can be used to purchase discounted tickets during the period of its validity, and there are no geographical restrictions on its use. 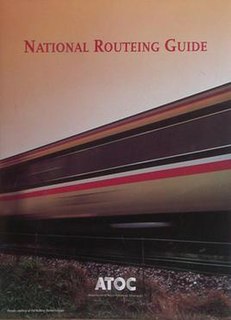 The railway network of Great Britain is operated with the aid of a number of documents, which have been sometimes termed "technical manuals", because they are more detailed than the pocket-timetables which the public encounters every day. Historically, they were classified PRIVATE and not for publication, however since rail privatisation they are now more widely available, mostly in digital form, because they are produced centrally and not by the regional rail operators.

Fare avoidance, as distinct from fare evasion, is the lawful use of knowledge to travel using tickets which cost significantly less than the 'normal' fare for a given journey, which is what one might be expected to use. It is common in some parts of the world with complex travel networks, notably the National Rail network of Great Britain.

The Senior Railcard is an annual card available to people aged 60 and over, which gives discounts on certain types of railway ticket in Britain. The Railcard has existed in various forms since 1975; the current version is priced at £30.00 and is valid for one year, with a 3-year card available for £70. It is one of a wide variety of discounted and concessionary fare schemes available on Britain's railway network.

A penalty fare, standard fare, or fixed penalty notice is a special, usually higher, fare charged because a passenger using public transport did not comply with the normal ticket purchasing rules. It should not be confused with an unpaid fares notice.

Plusbus is an add-on ticket, which can be purchased with National Rail train tickets in the United Kingdom. It allows unlimited travel on participating bus and tram operators' services in the whole urban area of rail-served towns and cities. 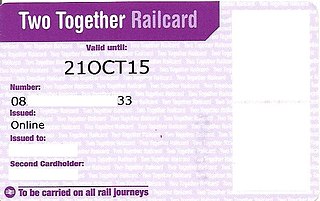 The Two Together Railcard is a scheme which gives discounts on certain types of railway ticket in Britain. Launched nationally in 2014 after a successful trial in 2011–12, it was the first new Railcard scheme since the 1980s. It is available to any two named individuals aged 16 or over and is priced at £30.00. There is no restriction on the number of times the Railcard can be used to purchase discounted tickets during the period of its validity, and there are no geographical restrictions on its use.

Avanti West Coast is a train operating company in the United Kingdom owned by FirstGroup (70%) and Trenitalia (30%) that operates the West Coast Partnership franchise.