Tidewater Inn is a historic hotel in Easton, Talbot County, Maryland, United States. It is a Colonial Revival brick, hip-roofed, four-story hotel with flanking three-story wings and an addition on the north wing. The original section was completed in 1949, with an addition to the north constructed in 1953. The floor plan of the original building is a flattened chevron shape. It served as the preeminent hostelry and community gathering place on the Maryland Eastern Shore during the time when new automobile-oriented transportation routes intensified the volume of visitors. [2]

Talbot County is a county located in the heart of the Eastern Shore of Maryland in the U.S. state of Maryland. As of the 2010 census, the population was 37,782. Its county seat is Easton. The county was named for Lady Grace Talbot, the wife of Sir Robert Talbot, an Anglo-Irish statesman, and the sister of Lord Baltimore.

The Tidewater Inn was listed on the National Register of Historic Places in 2007. [1]

The Cray House is a two-room house in Stevensville, Maryland. Built around 1809, it is a rare surviving example of post-and-plank construction, and of a build of small house which once dominated the local landscape. For these reasons it was listed on the National Register of Historic Places in 1983. 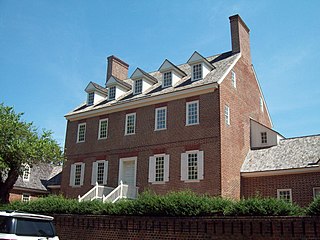 The William Paca House is an 18th-century Georgian mansion in Annapolis, Maryland, United States. William Paca was a signatory of the Declaration of Independence and a three-term Governor of Maryland. The house was built between 1763 and 1765 and its architecture was largely designed by Paca himself. The 2-acre (8,100 m2) walled garden, which includes a two-story summer house, has been restored to its original state.

Antrim 1844 Country House Hotel is a historic inn located in the heart of Taneytown, Carroll County, Maryland, United States. The Mansion is a ​2 1⁄2-story Greek Revival style brick masonry house constructed in 1844. The property retains many of its outbuildings and is operated as a hotel and restaurant. 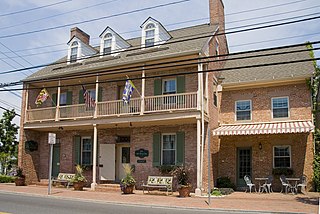 The Old Inn, also known as the Old Brick Inn, was built circa 1816 in Saint Michaels, Maryland. It is unusual for Maryland in possessing two-story porches on both its front and back sides. 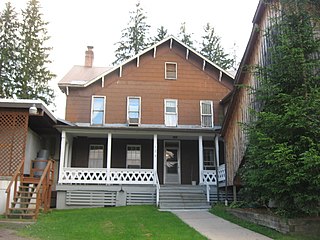 The Inns on the National Road is a national historic district near Cumberland, Allegany County, Maryland. It originally consisted of 11 Maryland inns on the National Road and located in Allegany and Garrett counties. Those that remain stand as the physical remains of the almost-legendary hospitality offered on this well-traveled route to the west.

Crooked Intention is a historic home in St. Michaels, Talbot County, Maryland, United States. It is a ​1 1⁄2-story brick dwelling, three bays wide with wings, built about 1753. A ​1 1⁄2-story Flemish bond wing was added in 1956. Also on the property is the original brick smokehouse and a beaded clapboard dairy.

Hope House is a historic home located near Easton, Talbot County, Maryland. It is a seven-part brick mansion in which the central block is the original, Federal portion, built about 1800. The hyphens, wings, and additions were built during the first decade of the 20th century to replace earlier hyphens and wings. It was home to members of the Tilghman and Lloyd families. 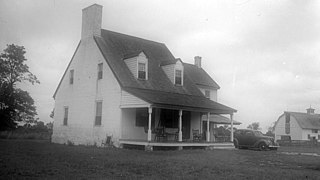 Jena is a historic home in Oxford, Talbot County, Maryland. It is a ​1 1⁄2-story brick structure with 19th- and 20th-century additions. It is faced in Flemish bond and distinguished by its first-story 9/6 windows with unusual canted and paneled reveals.

The Wye Town Farm House is a historic home in Easton, Talbot County, Maryland, United States. It is of brick construction, one and one-half stories high and two rooms deep with a small one-story brick kitchen. A two-story addition was made in the 20th century. The original section of the house dates from about 1800.

Old Bloomfield is a historic home at Easton, Talbot County, Maryland, United States. It is a large and sprawling structure constructed in three major sections: a ​1 1⁄2-story, three bay brick section with a steeply pitched roof built about 1720; a ​1 1⁄2-story frame addition on the southwest gable built about 1840; and a 2-story frame wing on the southwest end of this earlier addition. Also on the property is a small frame dairy, a heavy timber-frame crib, and a barn. It has remained in the same family as a working farm continuously since the 17th century.

Rock Clift, or High Banks, is a historic home at Matthews, Talbot County, Maryland, United States. It is a two-story, three-bay Flemish bond brick house with dormers and has a one-story four-bay frame addition that was built in two sections. The brick house appears to date from about the 1780s.

Victorian Corn Cribs are historic agricultural buildings at St. Michael's, Talbot County, Maryland. The two structures feature elaborate tracery along the eaves and bargeboards, and are connected by a low, rough shed. They were moved from their original site on the north side of U.S. Route 13, about two miles east of Westover, in Somerset County, to their present Talbot County site in June 1975.

Brooklandville House, or the Valley Inn, is a historic restaurant and tavern building, and a former inn, located in Brooklandville, Baltimore County, Maryland. It is a ​2 1⁄2-story stone structure facing the former railroad and dating from about 1832. It is associated with the Baltimore and Susquehanna Railroad, which crossed the property just to the south.

Clark's Conveniency is a historic home located near Pomona, Kent County, Maryland, United States. It is a ​1 1⁄2-story, early-18th-century brick house built in three sections: the main block and a wing on the east and west ends. It is representative of the houses built by the smaller but still prosperous planters of 18th-century tidewater Maryland.

The John Embert Farm is a historic home located at Millington, Queen Anne's County, Maryland, United States. It is a ​1 1⁄2-story Flemish bond brick house with a two-bay facade. The building is an exceedingly rare and almost pristine example of a small-scale Tidewater house.

The Doncaster Town Site is an archeological site near Easton, Talbot County, Maryland. The site is located on one of the earliest land grants in Talbot County, surveyed on October 18, 1658. It is the location of the first Roman Catholic Church erected on the Eastern Shore of Maryland. The town was erected in 1684 and was one of the first planned towns in Maryland. At its peak Doncaster would have contained inns, a chapel, warehouses, a ferry, stores, stocks and a whipping post, a public square, and a number of residences. Archeological deposits were recorded in 1961.

Cold Saturday, or Cold Saturday Farm, is a historic home and farm complex located near Finksburg, Carroll County, Maryland. The house is significant for embodying the characteristics of Anglo-American gentry farms that are common in the Tidewater region.