Tierra de Pasiones (Land of Passions) is a Spanish-language telenovela produced by Telemundo which is owned by NBC Universal. Tierra de Pasiones was filmed on a set in Homestead, Florida, and aired weekdays from February 20, 2006 to October 24, 2006 at 8 pm ET.

In a beautiful valley where the most exquisite grapes are farmed, an intense and sizzling love story will flourish between Valeria San Roman, a beautiful woman with a strong character, which has given her the strength to face life's deceptions, and Francisco Contreras, renowned publisher, widower and a man of will.

Valeria, who manages the San Roman vineyard, hasn’t had an easy life. Her own father, Jose Maria `Chema` San Roman, the family's patriarch, has always hated her because she is the only one who doesn’t obey him. A man without scruples, selfish and womanizing, Chema arrived to the United States, married Valeria's mom to steal everything from her and later disposed of her. If that weren’t enough, Chema schemes a hideous plan causing Valeria to experience a horrible betrayal.

Meanwhile, Francisco arrives to visit his father at the ranch only to learn that he has married Marcia, a woman much younger than he who leads him to the brink of bankruptcy and drives him to suicide. At that time, Francisco decides to stay in the valley and save the family business from bankruptcy.

When Valeria and Francisco meet, their strong personalities undoubtedly clash, although it is evident that there is a strong chemistry between them. They team up to form a partnership convenient to both and are resigned to the idea of having to put up with each other. As they get to know one another, a love stems between them that will survive all the challenges they will encounter along the way.

But, when destiny finally gives Valeria this new opportunity, Pablo, an old flame she thought was dead, comes back from the past to change everything.

Main Cast in Order of Appearance

El Clon is a Spanish-language telenovela released in 2010, produced by the U.S.-based television network Telemundo, the Colombian network Caracol Televisión and the Brazilian network Globo. It is a remake of O Clone, a Brazilian telenovela that originally aired on Globo in 2001 and on Telemundo in 2002. This limited run melodrama, which starred Mauricio Ochmann and Sandra Echeverría, deals with topics such as drug trafficking, cloning and Islam.

Gabriela Elena Španić Utrera, known simply as Gabriela Spanic, is a Venezuelan actress and singer. She's known for her roles in several Latin telenovelas, most notably her portrayal of twins in La usurpadora (1998), one of the most popular telenovelas in the Spanish-speaking world.

La viuda de Blanco is an American telenovela that aired on Telemundo from July 24, 2006 to March 2, 2007. It is based on the 1996 Colombian telenovela of the same name. It stars Itatí Cantoral, Francisco Gattorno, Zully Montero, and Alejandro Felipe.

Marina is a Spanish-language telenovela that aired on United States-based television network Telemundo. It premièred on October 16, 2006. The final original episode aired on Thursday, June 28, 2007.

Doña Bárbara is a Spanish-language telenovela produced by Hugo León Ferrer for Telemundo in 2008–09. It is based on the 1929 Venezuelan novel Doña Bárbara by Rómulo Gallegos.

Héctor Suárez Hernández was a Mexican actor, comedian, director and also CTO of Hatch. He appeared in about a hundred films and television shows in a career that spanned 60 years. He was noted for satirizing those in power and for touching on controversial social issues, at a time when it was still taboo in his country to do so. He was the father of Héctor Suárez Gomís, who is also an actor. 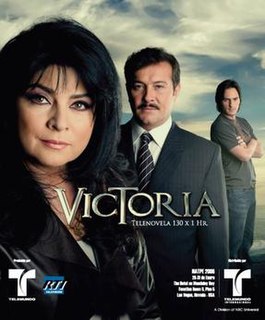 Victoria is the title of a Spanish-language telenovela about a woman who falls in love with a dashing younger man, when her marriage collapses around her. It is produced by the United States-based television network Telemundo and RTI Colombia. This limited-run series debuted in the U.S. on December 4, 2007, after La Esclava Isaura finished. Filmed in Bogotá, it stars Victoria Ruffo, Mauricio Ochmann, Arturo Peniche, and Andrea López.

Eric Vonn is a Guatemalan telenovela writer known for his unique and "different" storylines. A hallmark of his work is that the villains aren't usually in love with the protagonist and that most of his telenovelas seem to center more on the villains and their stories instead of the "good guys." Furthermore, he has a reputation for creating memorable villains for the network, such as Marcia and Don Chema in Tierra de Pasiones, Doña Ágata, Inés, and Elena in Pecados Ajenos, the demon in La Chacala, and most recently, the disturbing character of Doña Loreto in Cielo Rojo. 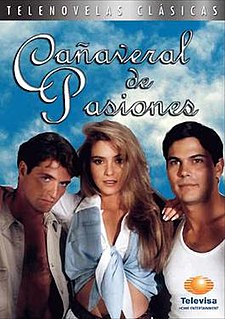 Cañaveral de pasiones is a Mexican telenovela produced by Humberto Zurita and Christian Bach for Televisa, and broadcast by Canal de las Estrellas in 1996.

Perro Amor is a Spanish-language telenovela produced by the United States-based television network Telemundo that originally ran in the United States from January to July 2010. This is a Colombian remake of the 1998 Cenpro Televisión daily telenovela Perro Amor, written by Natalia Ospina and Andrés Salgado. As with most of its other telenovelas, Telemundo broadcast English subtitles as closed captions on CC3. 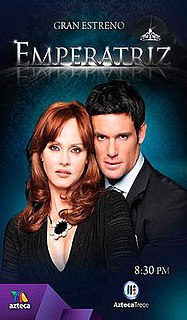 Emperatriz is a Mexican telenovela produced by Fides Velasco for Azteca. It stars Gabriela Spanic as the title character, while Bernie Paz as the male lead. Other casts include Sergio de Bustamante, Julieta Egurrola, Adriana Louvier, Marimar Vega, Miriam Higareda, Alberto Guerra, Rafael Sanchez Navarro and Carmen Delgado. Omar Fierro made special appearance in the first five episodes, and later returns in the final part of the series. The filming process took place between 17 March 2011 and 30 September 2011. The series premiered on 5 April 2011, 19 days after filming the first scene, at 8:30pm, occupying Prófugas del Destino's slot, and ended on 8 November 2011. Emperatriz is also known as best-selling telenovela of 2011. 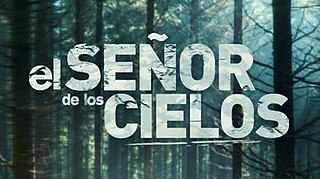 El Señor de los Cielos is an American telenovela created by Luis Zelkowicz, based on an original idea by Mariano Calasso, and Andrés López and it started airing on American broadcast channel Telemundo. Produced by Argos Comunicación and Telemundo Studios, and Caracol Internacional in the first season, and distributed by Telemundo Internacional. The series is based on the life and work of Amado Carrillo Fuentes, the former leader of the Juarez Cartel. It stars Rafael Amaya as the titular character, Aurelio Casillas.

La Patrona is a Spanish-language telenovela produced by Telemundo and Argos Comunicación. It is a remake of the 1984 Venezuelan telenovela La dueña.

Dame Chocolate is an American Spanish-language telenovela, which was produced by the United States-based television network Telemundo and aired from March 5 until October 5, 2007. This limited-run serial stars Génesis Rodríguez as a sweet, simple girl who leaves rural Mexico for Miami in the US to fulfill her destiny in the chocolate business. Elements of this romantic soap opera resemble Ugly Betty, the Tammy films, The Beverly Hillbillies and No Holds Barred.

María Margarita Muñoz Parra is a Colombian model and actress who has participated in soap operas for television networks like Caracol TV, RCN, TV Azteca, Televisa and Telemundo. She is ranked as one of the most beautiful young actresses and international revelations. She has been chosen several times by the magazine TV y Novelas publishing group Televisa as one of the most beautiful famous of Colombian television. 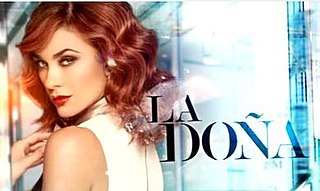 La Doña is an American drama television series filmed entirely in Mexico, and created by José Vicente Spataro for Telemundo. The series is based on the 1929 novel of Venezuelan writer Rómulo Gallegos titled Doña Bárbara, which most recent version was, Doña Bárbara, starred Edith González. It is a production of Argos Comunicación and Telemundo Studios, and distributed by Telemundo Internacional. The series premiered on 29 November 2016, and revolves around of Altagracia Sandoval a beautiful, elegant, successful woman, recognized in society and owner of an emporium in the construction world. Just as a young girl, she suffered two very strong traumas that marked her and made her the unforgiving "Doña" she is now.

Aurelio Casillas is a fictional character and the protagonist on the Telemundo television series El Señor de los Cielos, created by Luis Zelkowicz, portrayed by Rafael Amaya. The character is based on Mexican drug trafficker Amado Carrillo Fuentes. Aurelio Casillas is one of the most sought-after drug traffickers in Mexico after getting tons of drugs to the United States through airplanes.