Last updated September 04, 2022
Indonesian politician
In this Indonesian name, the person is referred to by his given name, Tifatul, and not by his surname, Sembiring.

Tifatul Sembiring (born 28 September 1961) is an Indonesian politician. He was chairman of the Islamic Prosperous Justice Party and Minister of Communication and Information in the Second United Indonesia Cabinet.

His father is Karo and moved to Bukittinggi where he married a Minangkabau woman. [1] Tifatul is the head of the big family in Guguak Tabek Sarojo,Agam,West Sumatra by the title Datuk Tumangguang. [2] He is married to Sri Rahayu and has seven children:Sabriana,Fathan,Ibrahim,Yusuf,Fatimah,Muhammad and Abdurrahman Sembiring.

Tifatul has a degree in computer engineering from the Information and Computing Management School (Indonesian :Sekolah Tinggi Ilmu Manajemen Informatika dan Komputer),Jakarta,and was active in a number of Indonesian Islamic organisations from his student days,such as PII,the Indonesian Student's Association [3] [4]

In 2009,he blamed immorality for a Sumatra earthquake and other natural disasters. As he addressed a Friday prayer meeting in Padang,Sumatra,the minister said "there were many television programmes that destroyed morals. Therefore,natural disasters would continue to occur." [5]

His ambition to filter the internet for 'negative' content,shelved in early 2010 in the face of broad opposition,may be revived after a celebrity sex scandal centred on Ariel (Nazril Irham),which Sembiring controversially linked to the crucifixion of Jesus Christ. [6] The move apparently has the backing of then-president Dr Susilo Bambang Yudhoyono and would involve a blacklist of offensive material monitored by a special task force, [7] which gave birth to the controversial 'Internet Positif.'

He has also linked pornography to HIV/Aids and said that funding to fight the disease was a waste of money, [6] also stating that the widespread availability of Indonesian pornography,mostly featuring students,caused natural disasters. [8] He was much criticized for quoting Adolf Hitler on his Twitter page,posting "the union between two children,when both of them complete each other,this is magic - Adolf Hitler". [9] He was questioned by Indonesian Twitter users for shaking the hand of U.S. First Lady Michelle Obama during her husband's November 2010 trip to Indonesia. [10] His hesitation in condemning the kidnapping of 276 girls by the terrorist group Boko Haram in Nigeria drew criticism and raises question at his suitability to serve in the government. [11] [12]

In May 2014,the Communication Minister tweeted from his personal account that video sharing site Vimeo would be banned. Citing Indonesia’s controversial anti-pornography law,passed in 2008,the minister said the site included displays of “nudity or nudity-like features”. [13] The ban came at a moment when films made in Indonesia had begun to attract attention on the world stage,with Joshua Oppenheimer’s “The Act of Killing”joining the ranks of the most acclaimed documentaries of all time. [14]

On 26 February 2016,he tweeted from his personal account quoting Islamic hadith that promotes killing people who practice homosexuality. [15] This sparked criticism from general public,Muslim scholars and human rights advocates due to growing intolerance towards LGBT community in Indonesia. He responded to the critics by calling them anti prophet Mohammed and anti Quran,but eventually deleted the post yet remained unapologetic.

Sembiring had been elected three times into the People's Representative Council,firstly in the 2009 election where he represented North Sumatra's first electoral district. He was reelected there in 2014,and again in 2019. [16] In the 2019 legislature,Sembiring was the chair of the Prosperous Justice Party's faction. [17] 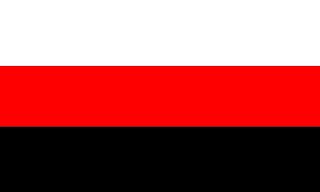 Batak is a collective term used to identify a number of closely related Austronesian ethnic groups predominantly found in North Sumatra,Indonesia,who speak Batak languages. The term is used to include the Karo,Pakpak,Simalungun,Toba,Angkola,and Mandailing which are related groups with distinct languages and traditional customs (adat).

Goodluck Ebele Azikiwe Jonathan is a Nigerian politician who served as the President of Nigeria from 2010 to 2015. He lost the 2015 presidential election to former military head of state General Muhammadu Buhari,and was the first incumbent president in Nigerian history to concede defeat in an election. Prior to that,he served as Vice President of Nigeria from 2007 to 2010 under the administration of Umaru Musa Yar'Adua;and in oil-rich Bayelsa State as Governor of Bayelsa State from 2005 to 2007.

Harmoko,colloquially referred to as Bung Harmoko,was an Indonesian politician and journalist who was active during the New Order era. He served as the Speaker of the People's Representative Council from 1997 until 1999,and was a factor in president Suharto's resignation during the widespread student demonstrations which occurred at the end of the New Order. 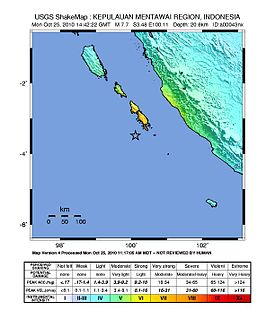 The 2010 Mentawai earthquake occurred with a moment magnitude of 7.8 on 25 October off the western coast of Sumatra at 21:42 local time. The earthquake occurred on the same fault that produced the 2004 Indian Ocean earthquake. It was widely felt across the provinces of Bengkulu and West Sumatra and resulted in a substantial localized tsunami that struck the Mentawai Islands.

Nazril Irham,known professionally as Ariel or Ariel "Noah",is an Indonesian musician,singer and songwriter of Minangkabau ancestry. He is the lead singer of Indonesian band Noah,formerly known as Peterpan. 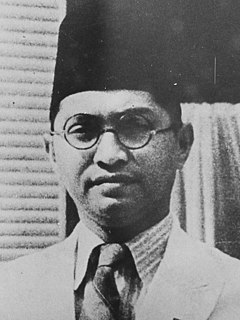 Teuku Mohammad Hasan was an Indonesian politician and national hero from Aceh,who served as the first and only governor of Sumatra from 1945 until 1948. He also served as a cabinet minister in Sjafruddin Prawiranegara's emergency cabinet and was a member of both the Senate of the United States of Indonesia (USI) and the Provisional People's Representative Council (DPRS) of the Republic of Indonesia. 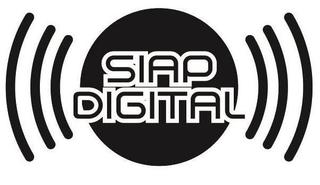 Digital terrestrial television in Indonesia (DVB-T2) started in 2009,and in most areas runs alongside the analogue TV system. The phase 1 of nationwide analog shutdown will be done in 166 regencies and cities,including Dumai,Banda Aceh,Batam,Tanjungpinang,Serang,Bali,Samarinda,Tanjung Selor,Tarakan,Makassar and Jayapura started from 30 April 2022 and it simplified in three stages,while the last analog broadcasting station will officially sign off on 2 November 2022 at midnight.

Yasonna Hamonangan Laoly is the current Minister of Law and Human Rights of Indonesia. He was a member of the North Sumatra regional legislature from 1999 to 2003,and of the People's Consultative Assembly from 2004 to 2014. He is the first ethnic Nias to hold a cabinet position. He is one of the leaders in the central executive board of the Indonesian Democratic Party of Struggle.

Andalas Grand Mosque is a mosque located in Andaleh Street no.56,Andaleh,East Padang district,Padang,West Sumatra,Indonesia. The mosque consists of a green building with two floors which has area of 1,200 m2,and a minaret in the southeast and an entrance gate in the south. 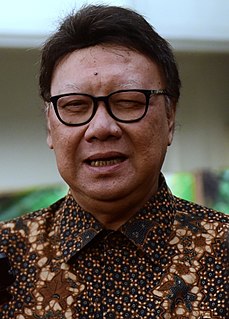 Tjahjo Kumolo was an Indonesian politician. He served as Minister of Home Affairs in the Working Cabinet (2014–2019),and Minister of Administrative and Bureaucratic Reform in the Onward Indonesia Cabinet from 2019 until his death,both under President Joko Widodo.

The Islamic Defenders Front was an Indonesian hardline Islamist organization founded in 1998 by Muhammad Rizieq Shihab with backing from military and political figures. Since 2015,Ahmad Shabri Lubis has been the organization's leader,while Rizieq Shihab holds the title of Grand Imam of the FPI for life. The FPI originally positioned itself as an Islamic religious police,mostly by conducting illegal and unauthorized vigilante operations. It also acted as an Islamist pressure group with prominent social media activism and mass mobilizations against pro-government activists,ethnic Chinese,Christian minority,as well as liberal and reformist politicians. 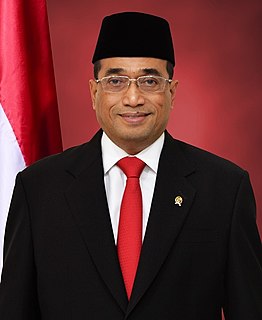 Budi Karya Sumadi is an Indonesian architect who currently serves as the Minister of Transportation in Joko Widodo's Working Cabinet. 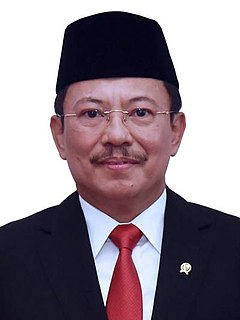 Terawan Agus Putranto is an Indonesian physician who served as the Minister of Health of Indonesia between 23 October 2019 and 23 December 2020. He graduated from the Faculty of Medicine of Gajah Mada University and then joined the Indonesian Army as a military physician. He is a radiologist. He is the fourth Health Minister of Indonesia to have come from the military and the first since Suwardjono Surjaningrat,who was in office between 1978 and 1988. As Suwardjono and the two earlier officers were 2-star generals,Terawan,a 3-star general,is the highest-ranked military officer to have ever held this ministerial office. 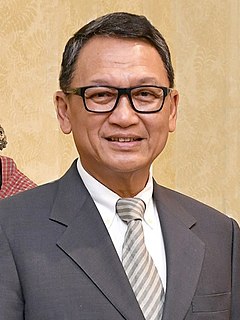 Arifin Tasrif is an Indonesian executive who is the Minister for Energy &Mineral Resources in Joko Widodo's Onward Indonesia Cabinet. 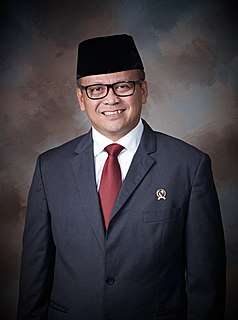 Edhy Prabowo is an Indonesian politician from the Great Indonesia Movement Party (Gerindra). He served as Minister of Maritime Affairs and Fisheries from October 2019 until his arrest for alleged corruption in November 2020. He has served as Chairperson of Commission IV of the House of Representatives and was chair of the Gerindra Faction there from 2014–2019.

Sugiharto was an Indonesian politician and businessman. He was Minister of State Owned Enterprises from 2004 to 2007 and was deputy chairman of the Indonesian Association of Muslim Intellectuals (ICMI). He died of COVID-19 in 2021.

Edy Mulyadi is an Indonesian senior journalist currently active at Forum News Network (FNN),notable for criticizing Indonesia's planned new capital city,Nusantara by using inappropriate words in late January 2022. He is also currently a cadre of the Prosperous Justice Party (PKS),and he was originally elected to the 2019 Indonesian legislative election as a DPR candidate but failed for insufficient votes.