Tiffany Foster (born 24 July 1984) is a Canadian equestrian who competes in the sport of show jumping.

At the 2012 Summer Olympics [1] in London, Foster was a member of the Canadian team in team jumping but she was disqualified before the final due to hypersensitivity in the front leg of her horse, Victor. [2] 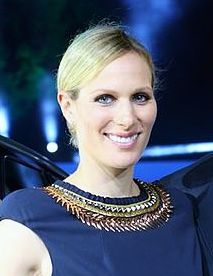 Zara Anne Elizabeth Tindall is a member of the British royal family and an equestrian and Olympian. She is the daughter of Princess Anne and Mark Phillips and the eldest granddaughter of Queen Elizabeth II.

Ian Millar, CM is a Canadian Equestrian Team athlete for show jumping. He is a two-time winner of the Show Jumping World Cup and an Olympic silver medalist. Due to his longevity and accomplishments, he is often nicknamed "Captain Canada" in his sport. He holds the record for most Olympic appearances by any athlete in any sport (10). A member of Canada's 2012 Olympic Games team, he broke the record when he took part in his tenth Games in London 2012.

The individual jumping event, part of the equestrian program at the 2004 Summer Olympics, was held from 22 to 27 August 2004 in the Olympic Equestrian Centre on the outskirts of Markopoulo in the Attica region of Greece. Like all other equestrian events, the jumping competition was mixed gender, with both male and female athletes competing in the same division.

Equestrian competitions at the 1968 Summer Olympics in Mexico City, Mexico featured team and individual competitions in show jumping, eventing, and dressage. Mexico City proved a challenging site since it was 2,300 meters above sea level, resulting in 30% less oxygen in the air. The horses at the 1955 Pan American Games, which was also held in Mexico City, arrived a few weeks before the Games to adjust, but had difficulty in the competition. However, racehorses that competed at the same location and who were shipped in the day before, and left the day after the race, performed fine. It was discovered that although horses would adjust immediately to the high altitude during the first few days after arrival, they showed weakness and decreased performance around Day 10, which continued to Day 20. Therefore, nations were advised to ship in horses 3–4 weeks before the competition, which would allow them time to recover from the long travel, as well as adjust to the difference in altitude. Argentina, Ireland, and the USSR were the first to ship horses over, who arrived mid-September. France and Germany were the last countries to send their horses, who arrived 28 September 20 days before the competition was to start.

Elizabeth Madden is an American Olympic champion equestrian competing in show jumping. She has two Olympic golds and one silver in team jumping, and an individual bronze. She won the FEI Show Jumping World Cup twice; won two silvers and two bronzes at World Championships; and won two golds, one silver and two bronzes at the Pan American Games. She was the first American to break into the international top three show jumping ranking, and the first woman to win over one million dollars in show jumping prize money.

Lieutenant Earl "Tommy" Thomson was an Olympic equestrian who won 5 medals during his international career. He was born in Cleveland.

Eric Lamaze is a Canadian showjumper and Olympic champion. He won individual gold and team silver at the 2008 Beijing Olympics, riding his famed horse Hickstead. Lamaze has won three Olympic medals, as well as four Pan American Games medals and one World Equestrian Games bronze. He is considered one of Canada's best showjumpers.

Canada, represented by the Canadian Olympic Committee (COC), competed at the 2012 Summer Olympics in London, United Kingdom, from 27 July to 12 August 2012. Canadian athletes have competed in every Summer Olympic Games since 1900, except the 1980 Summer Olympics in Moscow because of the country's support for the United States-led boycott. Canada sent a total of 281 athletes to the Games to compete in 24 sports. The COC set a goal of finishing in the top 12 for total medals; but the nation failed to achieve this, finishing with a total of 18 medals. Canada matched its total medal count from Beijing 2008. 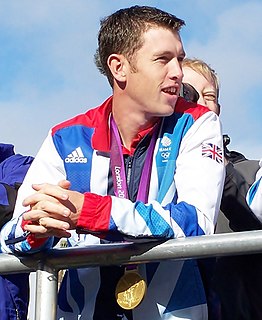 Scott Brash MBE is a Scottish showjumper. He began riding the horse Hello Sanctos in early 2012. They competed as part of the British Team at the 2012 Summer Olympics in London winning a gold medal in the team jumping event. In 2015 he became the first rider to win show jumping's Rolex Grand Slam, all three of the sport's most prestigious events in a single year, earning the sport's biggest individual prize of 1m Euros (£735,000). 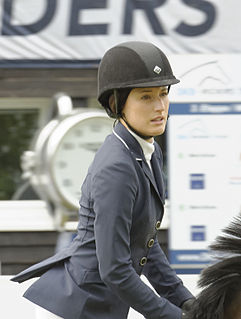 Jessica Rae Springsteen is an American equestrian. The daughter of musicians Bruce Springsteen and Patti Scialfa, she is a show jumping champion rider who has represented the United States Equestrian Team in international competition.

The Canadian Equestrian Team or CET collectively describes the athletes that represent Canada at the highest levels of international equestrian competition, specifically at the World Championship, Olympic, and Paralympic levels.

Amy Millar is a Canadian equestrian who competes in the sport of show jumping.