The Tiger of Pilibhit is a male sub-adult tiger believed to be responsible for killing and partially eating eight people in the Pilibhit and Shahjahanpur forest divisions of Uttar Pradesh, India from May through August 2010, before being captured. [1] 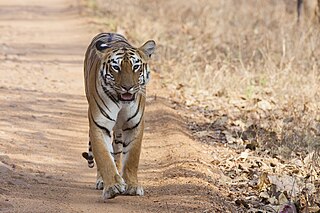 Pilibhit is a city and a municipal board in the Pilibhit district in the Indian state of Uttar Pradesh. Pilibhit is the north-easternmost district of Bareilly division, situated in the Rohilkhand region of the sub-Himalayan Plateau belt next to foothills of Sivalik Range on the boundary of Nepal, known for the origin of river Gomati and one of the most forest-rich areas in North India. Pilibhit was also known as Bansuri Nagari - the land of flutes, for making and exporting roughly 95 per cent of India's flutes.

Shahjahanpur is a municipal corporation, town and district headquarters of Shahjahanpur District in Uttar Pradesh, India.

The tiger is reported to have killed its first victim on 3 May 2010 in the Deoria range of Pilibhit forest division. The victim had entered the jungle in search of drift wood. [2] On 7 June, a second killing took place; when the body was recovered, the victim's right arm was found to have been eaten. This was the first instance in which the tiger was alleged to have eaten part of its victim. [3] After having reportedly claimed four more victims in the Deoria range, the tiger was said to have moved to the Khutar forest range in the Shahjahanpur forest division where it claimed two more victims in August 2010. 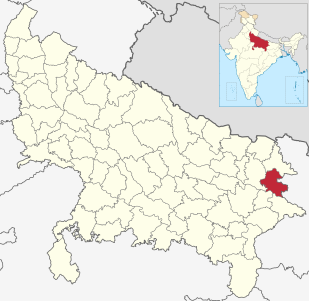 Khutar is a town and a nagar panchayat in Shahjahanpur district in the Indian state of Uttar Pradesh.

After the fourth human kill, forest department officials installed camera traps to identify the killer. A photo-capture confirmed the presence of three adult tigers and a cub in the locality. [2] Pugmarks were collected at the sites of the killings along with hair that had fallen from the tiger's body, which was sent for DNA analysis. [4] Based on these investigations, officials identified the animal as a sub-adult male that was attempting to establish its territory. [5] 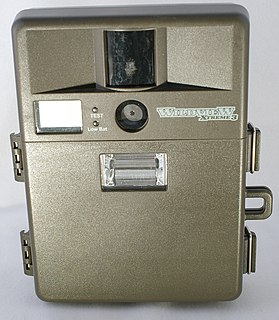 A camera trap is a remotely activated camera that is equipped with a motion sensor or an infrared sensor, or uses a light beam as a trigger. Camera trapping is a method for capturing wild animals on film when researchers are not present, and has been used in ecological research for decades. In addition to applications in hunting and wildlife viewing, research applications include studies of nest ecology, detection of rare species, estimation of population size and species richness, as well as research on habitat use and occupation of human-built structures.

Pugmark is the term used to refer to the footprint of most animals. "Pug" means foot in Hindi. Every individual animal species has a distinct pugmark and as such this is used for identification.

In ethology, territory is the sociographical area that an animal of a particular species consistently defends against conspecifics. Animals that defend territories in this way are referred to as territorial.

The tiger was not branded a man eater because all the human kills had taken place within the forest area. The tiger had also not eaten the flesh of three of its alleged victims and had continued to kill its natural prey. [6] Accordingly, it was decided to capture instead of shooting the tiger. The National Tiger Conservation Authority and a team from the Wildlife Trust of India (WTI) assisted forest officials in the capture of the tiger. [7] On 2 September 2010 Avijit Bhawal of the WTI fired a dart at the tiger. However, the tiger was alarmed by an inadvertent shot fired by a forest guard, causing it to move, deflecting the dart. [8] On 14 October, the tiger was tracked to a clump of Prosopis juliflora , where it was taking cover near Nagla Hira Singh village in Farrukhabad forest division. Three darts were successfully fired to tranquilize it. Prior to the tiger's sedation, a large crowd of people had gathered around the clump of bushes where the tiger was hidden and began pelting the animal with stones. One person was mauled severely and several others suffered injuries when the tiger attacked them. [6] [9] The tiger was sent to Lucknow Zoo on 15 October where it came to be known as Farrukhabadi by the zoo staff because of the fact that it was captured in the Farrukhabad forest division. Due to a lack of available space at the Lucknow Zoo, the tiger was moved to the Kanpur zoo on 24 October. [1]

The National Tiger Conservation Authority (NTCA) was established in December 2005 following a recommendation of the Tiger Task Force, constituted by the Prime Minister of India for reorganised management of Project Tiger and the many Tiger Reserves in India.

The Wildlife Trust of India (WTI) is an Indian nature conservation organisation to conserve wildlife and its habitat and to work for the welfare of individual wild animals. WTI has been credited for achieving conservation milestones such as Recovering population of critically endangered species, Translocation of Species, Reducing Human-Animal Conflict, Rescue and Rehabilitation of Animals including Elephants,Tigers,Leopards, One-horned Rhino and Bears.

Prosopis juliflora is a shrub or small tree in the family Fabaceae, a kind of mesquite. It is native to Mexico, South America and the Caribbean. It has become established as an invasive weed in Africa, Asia, Australia and elsewhere. It is a contributing factor to continuing transmission of malaria, especially during dry periods when sugar sources from native plants are largely unavailable to mosquitoes.

Following the attacks in an area where tigers had not been seen before, a tiger status monitoring exercise was initiated by the Uttar Pradesh Tiger Conservation Project in collaboration with the WTI to determine the nature of tiger movement in the area and to determine if the area should be considered a critical tiger zone. The survey is expected to be completed by January 2011. [2] 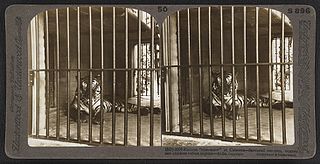 Tiger attacks are an extreme form of human–wildlife conflict which occur for various reasons and have claimed more human lives than attacks by any of the other big cats. The most comprehensive study of deaths due to tiger attacks estimates that at least 373,000 people died due to tiger attacks between 1800 and 2009, the majority of these attacks occurring in South and Southeast Asia. Over the last five centuries, an estimated 1 million people have been eaten by tigers. In Southeast Asia, attacks gradually declined after peaking in the nineteenth century, but attacks in South Asia have remained high, particularly in the Sundarbans.

Man-eater is a colloquial term for an individual animal that preys on humans as a pattern of hunting behavior. This does not include the scavenging of corpses, a single attack born of opportunity or desperate hunger, or the incidental eating of a human that the animal has killed in self-defense. However, all three cases may habituate an animal to eating human flesh or to attacking humans, and may foster the development of man-eating behavior.

Pilibhit Tiger Reserve is located in Pilibhit district, Lakhimpur Kheri District and Bahraich District of Uttar Pradesh state in India. It lies along the India-Nepal border in the foothills of the Himalayas and the plains of the ‘terai’ in Uttar Pradesh. It is one of India's 50 Project Tiger Tiger reserves.