Alfredo William "Tito" Horford (born January 19, 1966) is a Dominican retired professional basketball player who was selected by the Milwaukee Bucks in the second round (39th overall) of the 1988 NBA draft. Horford played three years in the National Basketball Association (NBA), two with the Bucks from 1988–1990, and a short stint with the Washington Bullets during the 1993–94 season. He played in Spain in 1992. He was listed on the Bucks' summer 1992 roster.

The Milwaukee Bucks are an American professional basketball team based in Milwaukee, Wisconsin.

The 1988 NBA draft took place on June 28, 1988, in New York City, New York. The length was reduced from seven rounds in the previous year to three rounds.

Born in La Romana, Dominican Republic, he attended Marian Christian High School (closed in 1989) [1] in Houston which originally recruited him from the Dominican Republic. After high school, Horford enrolled at the University of Houston, when he was ruled ineligible. He then went to Louisiana State University before being kicked off the team. He then played at Miami. [2]

Drafted by the Milwaukee Bucks with the 39th pick of the 1988 NBA draft, Tito Horford became the first Dominican-born player to play in the NBA. [3] He spent the 1988–89 and ’89–90 seasons with the Milwaukee Bucks and also had a three-game stint with the Washington Bullets. Horford then travelled the world to play basketball in France and Italy while also playing in the Dominican semi-pro leagues as well as for the national team. [4]

Tito's father was a Bahamian immigrant. [5] After retiring from basketball, he settled in Lansing, Michigan.

The Bahamas, known officially as the Commonwealth of The Bahamas, is a country within the Lucayan Archipelago, in the West Indies. The archipelagic state consists of more than 700 islands, cays, and islets in the Atlantic Ocean, and is located north of Cuba and Hispaniola Island, northwest of the Turks and Caicos Islands, southeast of the U.S. state of Florida, and east of the Florida Keys. The capital is Nassau on the island of New Providence. The Royal Bahamas Defence Force describes The Bahamas' territory as encompassing 470,000 km2 (180,000 sq mi) of ocean space.

His son, Al Horford, went to the University of Florida and played a prominent role on the Gators team that won the national championship in 2006 and 2007. He was selected 3rd overall by the Atlanta Hawks in the 2007 NBA draft.

Alfred Joel Horford Reynoso is a Dominican professional basketball player for the Philadelphia 76ers of the National Basketball Association. He played college basketball for the University of Florida, and was the starting center on the Gators teams that won back-to-back NCAA national championships in 2006 and 2007. He was drafted with the third overall pick in the 2007 NBA draft by the Atlanta Hawks, a team he played nine seasons with before joining the Celtics in 2016. He is a five-time NBA All-Star. He also represents the Dominican Republic national team.

His son Jon Horford played forward for the University of Michigan basketball team. He then transferred to Florida after his junior season. [6]

Jonathon Kelly Horford is an American professional basketball player for the Grand Rapids Drive of the NBA G League. He played one season of college basketball for the Florida Gators during the 2014–15 season. Before Florida, he played four years with the Michigan Wolverines ending with the 2013–14 team. He was an All-State high school basketball player for Grand Ledge High School in Michigan. His father, Tito Horford, and brother, Al Horford, have both played in the National Basketball Association.

Robert L. Dandridge is an American former professional basketball player. Dandridge was a four-time NBA All-Star and two-time NBA Champion, who scored 15,550 points in his career. 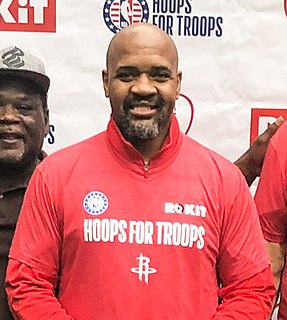 Martyn Bernard "Moochie" Norris is an American former professional basketball player who played several seasons in the National Basketball Association (NBA), as well as other leagues.

The 1978–79 NBA season was the 33rd season of the National Basketball Association. The season ended with the Seattle SuperSonics winning the NBA Championship, beating the Washington Bullets 4 games to 1 in the NBA Finals, a rematch of the previous year's Finals, but with the opposite result.

Ernest Grunfeld is an American former professional basketball player and former general manager of the Washington Wizards of the National Basketball Association. In college at the University of Tennessee, he set a new record as the school's all-time leading scorer. He won gold medals with Team USA at the 1975 Pan American Games and the 1976 Summer Olympics. He began his professional career as a player with the Milwaukee Bucks. He served as General Manager of the New York Knicks of the National Basketball Association from 1989 to 1999, and as the Bucks General Manager from 1999 to 2003, and then became the president of basketball operations for the Washington Wizards from 2003 to 2019.

Shawn Christopher Respert is an American retired professional basketball player who used to be an assistant coach with the Chicago Bulls of the National Basketball Association (NBA). A 6'3" shooting guard born in Detroit, Michigan, he attended Bishop Borgess High School, and he came to prominence while playing college basketball at Michigan State University where his jersey is now retired. He played professionally in the NBA for four seasons from 1995 to 1999.

Michael Walter Peplowski is a retired American professional basketball player who was selected by the Sacramento Kings in the 2nd round of the 1993 NBA draft. A 6'10" and 270 lb center, Peplowski played for the Kings, Detroit Pistons, Washington Bullets and Milwaukee Bucks in 3 NBA seasons. After graduating from De La Salle Collegiate High School in Warren, Michigan in 1988, Peplowski played collegiately at Michigan State University.

Alphonso "Buck" Johnson Jr. is a retired American professional basketball player. Johnson, a 6'7" small forward, was selected by the Houston Rockets in the 1st round of the 1986 NBA draft.

Kevin Michael Grevey is a retired American professional basketball player. A 6'5" swingman, the left-handed Grevey played for the Washington Bullets from 1975–1983 and the Milwaukee Bucks from 1983–1985. He is now a color commentator for various college basketball games, including on national radio with Westwood One.

Bryan Anthony Warrick is a retired American professional basketball player. He was a 6'5" (195 cm) 218 lb (99 kg) shooting guard and played collegiately at Saint Joseph's University where he was named to the East Coast Conference and Philadelphia Big 5 First Teams.

The 1988 NBA Expansion Draft was the eighth expansion draft of the National Basketball Association (NBA). The draft was held on June 23, 1988, so that the newly founded Charlotte Hornets and Miami Heat could acquire players for the upcoming 1988–89 season. Charlotte and Miami had been awarded the expansion teams on April 22, 1987. In an NBA expansion draft, new NBA teams are allowed to acquire players from the previously established teams in the league. Not all players on a given team are available during an expansion draft, since each team can protect a certain number of players from being selected. In this draft, each of the twenty-three other NBA teams had protected eight players from their roster and the Hornets and the Heat selected eleven and twelve unprotected players respectively, one from each team. Prior to the draft, the league conducted a coin flip between the Hornets and the Heat to decide their draft order in this expansion draft and in the 1988 NBA draft. The Hornets won the coin flip and chose to have the higher pick in the 1988 Draft, thus allowing the Heat to receive the first selection and the right to select twelve players in this expansion draft.

Trevon Tyler Duval is an American professional basketball player for the Rio Grande Valley Vipers of the NBA G League. He played college basketball for the Duke Blue Devils. As a high school player, he was a consensus five-star prospect in the Class of 2017. In January 2017, Duval was selected as a McDonald's All-American.

The 1985 McDonald's All-American Boys Game was an All-star basketball game played on Saturday, April 13, 1985 at the Moody Coliseum in University Park, Texas. The game's rosters featured the best and most highly recruited high school boys graduating in 1985. The game was the 8th annual version of the McDonald's All-American Game first played in 1978.