Thomas Sherman (born October 31,1957) is an American physician and politician from Rye,New Hampshire,and a member of the New Hampshire Senate for the 24th district. Senator Sherman serves as ranking member and former chair of Senate Health &Human Services,and as member and former chair of the Election Law &Municipal Affairs committee. He is a former member of the New Hampshire House of Representatives. [1] He represents Rockingham County and has been prominent in advocating for state-level implementations of the Affordable Care Act.

Sherman received a bachelor of arts degree in classics from Northwestern University in 1980. [2] He then took classes at Georgetown University to complete his pre-med coursework [3] before receiving his medical degree at the University of Connecticut in 1987. [4]

Sherman is a founding director of Next Generation Choices Foundation and chairman of the board of directors of LessCancer.org,a 501(c)(3) organization dedicated to educating the public about lifestyle changes that could reduce the potential for people to become afflicted with cancer. [6]

Sherman wrote an op-ed on Seacoastonline.com calling for the New Hampshire legislature to preserve Medicaid expansion so it would continue to cover drug treatment programs for individuals arrested for drug-related offenses. [7]

Sherman co-sponsored a bill to ban teenagers from patronizing tanning salons. The bill was passed into law by Governor Maggie Hassan in early June 2015. [8]

Sherman ran and was elected to the New Hampshire House of Representatives along with fellow Democrat David Borden for the Rockingham 24th district in 2012. He became a member of the Health,Human Services,&Elderly Affairs committee. He and Borden were reelected in 2014.

Sherman has been instrumental in leading state-level implementation of Medicare expansion under the New Hampshire Health Protection Program. As part of the legislature's Health,Human Services,&Elderly Affairs committee and as part of the general vote,he led a commission [9] and later voted for expanding Medicaid to 50,000 state residents. [10] The bill was passed into law by Governor Maggie Hassan on March 27,2014. [11] As of October 14,2014,over 20,000 New Hampshire residents had signed up to receive the expanded coverage. [12]

Sherman also supported legalizing the use of marijuana for therapeutic purposes,especially for patients medically diagnosed with terminal illnesses and serious conditions. He testified and voted for the medical provisions of the law in March 2013. [13] A law legalizing medical use of marijuana was subsequently passed and went into effect July 25,2013. [14]

Sherman co-sponsored a bill that required hospital technicians to register with a board for health care workers who are not otherwise already licensed or registered and who have access to both drugs and patients. The bill (H.B. 658) also requires hospitals to report disciplinary actions to the board,which could perform its own investigations of wrongdoing. [15] The law went into effect October 1,2014. [16]

Sherman was interviewed for his role in working for cancer prevention as a member of the Next Generation Choices Foundation in Seacoastonline.com on February 28,2016. [17]

On February 15,2022 Sherman formed an exploratory committee to run in the 2022 New Hampshire gubernatorial election. [18] On March 14 Sherman officially announced his campaign. [19]

The Marijuana Policy Project (MPP) is the largest organization working solely on marijuana policy reform in the United States in terms of its budget,number of members,and staff. Its stated aims are to:(1) increase public support for non-punitive,non-coercive marijuana policies;(2) identify and activate supporters of non-punitive,non-coercive marijuana policies;(3) change state laws to reduce or eliminate penalties for the medical and non-medical use of marijuana;and (4) gain influence in Congress. MPP advocates taxing and regulating the possession and sale of marijuana in a manner similar to alcohol,envisions a nation where marijuana education is honest and realistic,and believes treatment for problem marijuana users should be non-coercive and geared toward reducing harm. The organization and its various ballot initiatives has largely been funded by the late billionaire Peter B. Lewis,and now by his family. Marijuanna Policy Project estimated that the market of legal cannabis will reach 57 bln USD in 2030.

Nicholas Paul Scutari is an American politician and attorney who is the 115th and current President of the New Jersey Senate. A member of the Democratic Party,he has served in the New Jersey Senate since 2004,representing the 22nd Legislative District. He has held the position of Senate President since 2022. 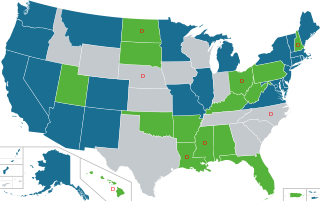 In the United States,the non-medical use of cannabis is legalized in 19 states and decriminalized in 12 states as of May 2022. Decriminalization refers to a policy of reduced penalties for cannabis offenses,typically involving a civil penalty for possessing small amounts,instead of criminal prosecution or the threat of arrest. In jurisdictions without penalty the policy is referred to as legalization,although the term decriminalization is sometimes used for this purpose as well.

In the United States,increased restrictions and labeling of cannabis as a poison began in many states from 1906 onward,and outright prohibitions began in the 1920s. By the mid-1930s cannabis was regulated as a drug in every state,including 35 states that adopted the Uniform State Narcotic Drug Act. The first national regulation was the Marihuana Tax Act of 1937.

The use,sale,and possession of cannabis over 0.3% THC in the United States,despite laws in many states permitting it under various circumstances,is illegal under federal law. As a Schedule I drug under the federal Controlled Substances Act of 1970,cannabis over 0.3% THC is considered to have "no accepted medical use" and have a high potential for abuse and physical or psychological dependence. Cannabis use is illegal for any reason,with the exception of FDA-approved research programs. However,individual states have enacted legislation permitting exemptions for various uses,including medical,industrial,and recreational use.

In the United States,the use of cannabis for medical purposes is legal in 37 states,four out of five permanently inhabited U.S. territories,and the District of Columbia,as of February 2022. Eleven other states have more restrictive laws limiting THC content,for the purpose of allowing access to products that are rich in cannabidiol (CBD),a non-psychoactive component of cannabis. There is significant variation in medical cannabis laws from state to state,including how it is produced and distributed,how it can be consumed,and what medical conditions it can be used for. 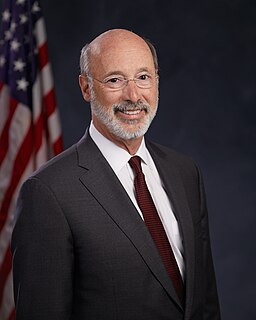 Thomas Westerman Wolf is an American politician and businessman serving as the 47th governor of Pennsylvania since 2015. A member of the Democratic Party,he defeated Republican incumbent Tom Corbett in the 2014 gubernatorial election and was reelected in 2018 by a margin of 17.1%. Before his election as governor,Wolf was the secretary of the Pennsylvania Department of Revenue from April 2007 to November 2008 and an executive in his family-owned business. 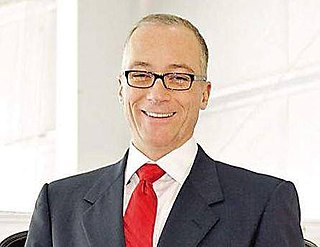 In the United States,the use and possession of cannabis is illegal under federal law for any purpose by way of the Controlled Substances Act of 1970 (CSA). Under the CSA,cannabis is classified as a Schedule I substance,determined to have a high potential for abuse and no accepted medical use –thereby prohibiting even medical use of the drug. Despite this,most states have legalized either or both the medical and recreational use of cannabis.

John Steven Vaillancourt was an American politician,who served as a member of the New Hampshire House of Representatives. He represented Hillsborough County District 15,the city of Manchester Ward 8. He served from 1996 to 2014 and from 2016 until his death. He served as a member of the Democratic Party,the Libertarian Party,and later the Republican Party. Vaillancourt also served as Manchester alderman for Ward 8 from 1999 to 2001 while serving in the State House of Representatives.

The legal history of cannabis in the United States began with state-level prohibition in the early 20th century,with the first major federal limitations occurring in 1937. Starting with Oregon in 1973,individual states began to liberalize cannabis laws through decriminalization. In 1996,California became the first state to legalize medical cannabis,sparking a trend that spread to a majority of states by 2016. In 2012,Washington and Colorado became the first states to legalize cannabis for recreational use. 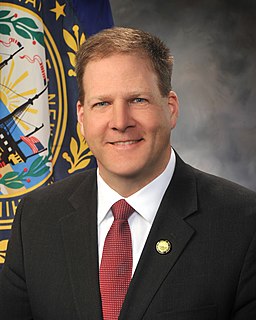 Cannabis in Iowa is illegal for recreational use if classified as marijuana but consumable hemp products including CBD products are legal for consumers to possess and registered retailers to sell. Possession of even small amounts of marijuana is a misdemeanor crime. The state has a medical cannabidiol program for serious medical conditions that allows for the legal possession of products containing 3% or less THC.

Cannabis in Virginia is legal for medical use and recreational use. The first medical marijuana dispensary opened in August 2020,and adult recreational use became legalized in July 2021.

The Florida Medical Marijuana Legalization Initiative,also known as Amendment 2,was approved by voters in the Tuesday,November 8,2016,general election in the State of Florida. The bill required a super-majority vote to pass,with at least 60% of voters voting for support of a state constitutional amendment. Florida already had a medical marijuana law in place,but only for those who are terminally ill and with less than a year left to live. The goal of Amendment 2 is to alleviate those suffering from these medical conditions:cancer,epilepsy,glaucoma,positive status for human immunodeficiency virus (HIV),acquired immune deficiency syndrome (AIDS),post-traumatic stress disorder (PTSD),amyotrophic lateral sclerosis (ALS),Crohn's disease,Parkinson's disease,multiple sclerosis,chronic nonmalignant pain caused by a qualifying medical condition or that originates from a qualified medical condition or other debilitating medical conditions comparable to those listed. Under Amendment 2,the medical marijuana will be given to the patient if the physician believes that the medical use of marijuana would likely outweigh the potential health risks for a patient. Smoking the medication was not allowed under a statute passed by the Florida State Legislature,however this ban was struck down by Leon County Circuit Court Judge Karen Gievers on May 25,2018.

Cannabis in Rhode Island is legal for medical and adult use. Medical use was legalized through legislation approved in 2006,and adult use in 2022.

Cannabis in New Mexico is legal for recreational use as of June 29,2021. A bill to legalize recreational use –House Bill 2,the Cannabis Regulation Act –was signed by Governor Michelle Lujan Grisham on April 12,2021. The first licensed sales of recreational cannabis began on April 1,2022.

Cannabis in New Hampshire is illegal for recreational use and decriminalized for possession of up to three-quarters of an ounce (21 g) as of July 18,2017. Medical use is legal through legislation passed in 2013.

Cannabis in Washington relates to a number of legislative,legal,and cultural events surrounding the use of cannabis. On December 6,2012,Washington became the first U.S. state to legalize recreational use of marijuana and the first to allow recreational marijuana sales. The state had previously legalized medical marijuana in 1998. Under state law,cannabis is legal for medical purposes and for any purpose by adults over 21.