Telma Alexandra Pinto MonteiroComM is a Portuguese judoka who has won multiple medals in international competitions, such as the European and World Championships. She is a two times winner of the Paris Grand Slam, in 2012 and 2015.

Majlinda Kelmendi is a Kosovo-Albanian judoka.

Natalia Yuryevna Kuziutina is a Russian judoka who competes in the women's 52 kg category. She won a bronze at the 2016 Summer Olympics.

Varlam Liparteliani is a Georgian judoka. He has won silver at Olympic and World level.

Clarisse Agbegnenou is a French judoka. Competing in the −63 kg weight division she won the European title in 2013, the world title in 2014 and an Olympic silver medal in 2016.

Tina Trstenjak is a Slovenian judoka who won gold in the Women's 63 kg at the 2016 Summer Olympics in Rio de Janeiro, Brazil.

Natalie Powell is a Welsh judoka. She competed for Wales in the women's 78 kg event at the 2014 Commonwealth Games where she won a gold medal. In 2017 she became the first female British judoka to be ranked number one in the world, which she accomplished by winning a gold medal at the Abu Dhabi judo Grand Slam 2017. Earlier that year she won a bronze medal at the European Championships.

Sagi Aharon Muki is an Israeli half-middleweight judoka. Muki is the 2019 World Champion. He also won the 2015 and 2018 European championships.

Gili Cohen is an Israeli Olympic judoka. In 2013, she won the silver medal at the European U23, and she was a bronze medalist at the 2014 European Judo Championships.

Aleksandar Kukolj is a Serbian judoka. He won the Grand Slam of Abu Dhabi in 2016. In 2016 he took the victory at the Grand Slam in Tokyo. Kukolj started with bronze in 2016 in Havana and silver at the Grand Prix in Baku and silver the Grand Prix Samsun in 2015 and Zagreb in 2014. Kukolj won World Cups in Lisbon in 2012 and won the Panam Open in San Salvador in 2014 & Mediterranean Games in 2013. He won European bronze as Junior and U23. He competed at the 2016 Summer Olympics in Rio de Janeiro, in the men's 90 kg.

Daria Bilodid is a Ukrainian judoka. She is the 2019 World and the 2019 European gold medalist in the 48 kg division.

Matthias Casse is a Belgian judoka. In 2017, Matthias Casse became junior world champion in Zagreb, the first Belgian male judoka to achieve this since Johan Laats in 1986. That same year, he won his first judo grand prix medal at senior level, winning a bronze medal in The Hague. In 2019 he won the gold medal at the European Games and at the Judo World Masters. After having won the Paris Grand Slam in 2020 he became the no. 1 on the world ranking in his category.

Baruch Shmailov is an Israeli judoka. He competes in the under 66 kg weight category, and won a silver medal in the 2018 World Masters in Guangzhou. Shmailov won a bronze in the 2017 World Masters, and in 2018 Düsseldorf Grand Slam. In March 2018 he was ranked #5 in the world in the U66 kg division.

Tohar Butbul is an Israeli judoka. He competes in the under 73 kg weight category, where he won silver medals at the 2019 Judo World Masters and the 2021 European Championships, and won bronze medals in the 2017 Paris Grand Slam and 2017 Grand Slam Abu Dhabi. As of March 2018 he is ranked #9 in the world in the U73 kg division. 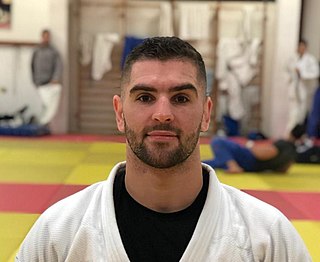 Peter Paltchik is an Israeli judoka, competting in the under 100 kg weight category, of which he is the current number 1 ranked Judoka in the world. In September 2019 he won the Israeli championship in the 100+ Kg category. Paltchik won the Gold medal at the 2020 European Judo Championships in Prague on November 21, 2020, beating Russian judoka Arman Adamian in the final, Adding to his bronze medal from the 2018 European Judo Championships in Tel Aviv.