Tonicity is a measure of the effective osmotic pressure gradient; the water potential of two solutions separated by a semipermeable cell membrane. In other words, tonicity is the relative concentration of solutes dissolved in solution which determine the direction and extent of diffusion. It is commonly used when describing the response of cells immersed in an external solution.

There are three classifications of tonicity that one solution can have relative to another: hypertonic, hypotonic, and isotonic. [1]

A hypertonic solution has a greater concentration of solutes than another solution. In biology, the tonicity of a solution usually refers to its solute concentration relative to that of another solution on the opposite side of a cell membrane; a solution outside of a cell is called hypertonic if it has a greater concentration of solutes than the cytosol inside the cell. When a cell is immersed in a hypertonic solution, osmotic pressure tends to force water to flow out of the cell in order to balance the concentrations of the solutes on either side of the cell membrane. The cytosol is conversely categorized as hypotonic, opposite of the outer solution.

When plant cells are in a hypertonic solution, the flexible cell membrane pulls away from the rigid cell wall, but remains joined to the cell wall at points called plasmodesmata. The cells often take on the appearance of a pincushion, and the plasmodesmata almost cease to function because they become constricted, a condition known as plasmolysis. In plant cells the terms isotonic, hypotonic and hypertonic cannot strictly be used accurately because the pressure exerted by the cell wall significantly affects the osmotic equilibrium point.

Some organisms have evolved intricate methods of circumventing hypertonicity. For example, saltwater is hypertonic to the fish that live in it. Because the fish need a large surface area in their gills in contact with seawater for gas exchange, they lose water osmotically to the sea from gill cells. They respond to the loss by drinking large amounts of saltwater, and actively excreting the excess salt. This process is called osmoregulation.

A hypotonic solution has a lower concentration of solutes than another solution. In biology, a solution outside of a cell is called hypotonic if it has a lower concentration of solutes relative to the cytosol. Due to osmotic pressure, water diffuses into the cell, and the cell often appears turgid, or bloated. For cells without a cell wall such as animal cells, if the gradient is large enough, the uptake of excess water can produce enough pressure to induce cytolysis, or rupturing of the cell. When plant cells are in a hypotonic solution, the central vacuole takes on extra water and pushes the cell membrane against the cell wall. Due to the rigidity of the cell wall, it pushes back, preventing the cell from bursting. This is called turgor pressure. [2]

A solution is isotonic when its effective osmole concentration is the same as that of another solution. In biology, the solutions on either side of a cell membrane are isotonic if the concentration of solutes outside the cell is equal to the concentration of solutes inside the cell. In this case the cell neither swells nor shrinks because there is no concentration gradient to induce the diffusion of large amounts of water across the cell membrane. Water molecules freely diffuse through the plasma membrane in both directions, and as the rate of water diffusion is the same in each direction, the cell will neither gain nor lose water.

An iso-osmolar solution can be hypotonic if the solute is able to penetrate the cell membrane. For example, an iso-osmolar urea solution is hypotonic to red blood cells, causing their lysis. This is due to urea entering the cell down its concentration gradient, followed by water. The osmolarity of normal saline, 9 grams NaCl dissolved in water to a total volume of one liter, is a close approximation to the osmolarity of NaCl in blood (about 290 mOsm/L). Thus, normal saline is almost isotonic to blood plasma. Neither sodium nor chloride ions can freely pass through the plasma membrane, unlike urea. 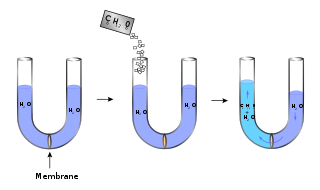 Plasmolysis is the process in which cells lose water in a hypertonic solution. The reverse process, deplasmolysis or cytolysis, can occur if the cell is in a hypotonic solution resulting in a lower external osmotic pressure and a net flow of water into the cell. Through observation of plasmolysis and deplasmolysis, it is possible to determine the tonicity of the cell's environment as well as the rate solute molecules cross the cellular membrane.

The nephron is the microscopic structural and functional unit of the kidney. It is composed of a renal corpuscle and a renal tubule. The renal corpuscle consists of a tuft of capillaries called a glomerulus and an encompassing Bowman's capsule. The renal tubule extends from the capsule. The capsule and tubule are connected and are composed of epithelial cells with a lumen. A healthy adult has 1 to 1.5 million nephrons in each kidney. Blood is filtered as it passes through three layers: the endothelial cells of the capillary wall, its basement membrane, and between the foot processes of the podocytes of the lining of the capsule. The tubule has adjacent peritubular capillaries that run between the descending and ascending portions of the tubule. As the fluid from the capsule flows down into the tubule, it is processed by the epithelial cells lining the tubule: water is reabsorbed and substances are exchanged ; first with the interstitial fluid outside the tubules, and then into the plasma in the adjacent peritubular capillaries through the endothelial cells lining that capillary. This process regulates the volume of body fluid as well as levels of many body substances. At the end of the tubule, the remaining fluid—urine—exits: it is composed of water, metabolic waste, and toxins. 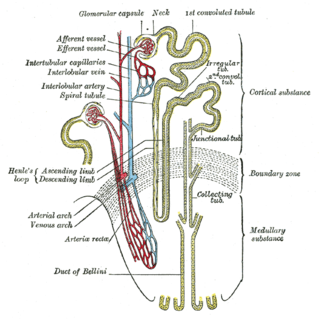 An osmotic diuretic is a type of diuretic that inhibits reabsorption of water and sodium (Na). They are pharmacologically inert substances that are given intravenously. They increase the osmolarity of blood and renal filtrate.

Saline is a mixture of sodium chloride in water and has a number of uses in medicine. Applied to the affected area it is used to clean wounds, help remove contact lenses, and help with dry eyes. By injection into a vein it is used to treat dehydration such as from gastroenteritis and diabetic ketoacidosis.

A contractile vacuole (CV) is a sub-cellular structure (organelle) involved in osmoregulation. It is found predominantly in protists and in unicellular algae. It was previously known as pulsatile or pulsating vacuole.

Plasma osmolality measures the body's electrolyte–water balance. There are several methods for arriving at this quantity through measurement or calculation.

Turgor pressure is the force within the cell that pushes the plasma membrane against the cell wall.

Euryhaline organisms are able to adapt to a wide range of salinities. An example of a euryhaline fish is the molly which can live in fresh water, brackish water, or salt water.

A countercurrent mechanism system is a mechanism that expends energy to create a concentration gradient. 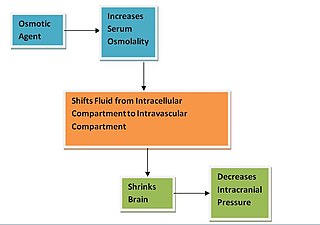 Osmotherapy is the use of osmotically active substances to reduce the volume of intracranial contents. Osmotherapy serves as the primary medical treatment for cerebral edema. The primary purpose of osmotherapy is to improve elasticity and decrease intracranial volume by removing free water, accumulated as a result of cerebral edema, from brain's extracellular and intracellular space into vascular compartment by creating an osmotic gradient between the blood and brain. Normal serum osmolality ranges from 280-290 mOsm/kg and serum osmolality to cause water removal from brain without much side effects ranges from 300-320 mOsm/kg. Usually, 90 mL of space is created in the intracranial vault by 1.6% reduction in brain water content. Osmotherapy has cerebral dehydrating effects. The main goal of osmotherapy is to decrease intracranial pressure(ICP) by shifting excess fluid from brain. This is accomplished by intravenous administration of osmotic agents which increase serum osmolality in order to shift excess fluid from intracellular or extracellular space of the brain to intravascular compartment. The resulting brain shrinkage effectively reduces intracranial volume and decreases ICP. 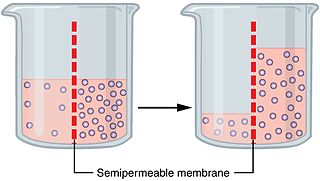 Osmosis is the spontaneous net movement of solvent molecules through a selectively permeable membrane into a region of higher solute concentration, in the direction that tends to equalize the solute concentrations on the two sides. It may also be used to describe a physical process in which any solvent moves across a selectively permeable membrane separating two solutions of different concentrations. Osmosis can be made to do work. Osmotic pressure is defined as the external pressure required to be applied so that there is no net movement of solvent across the membrane. Osmotic pressure is a colligative property, meaning that the osmotic pressure depends on the molar concentration of the solute but not on its identity.

Osmoregulation is the active regulation of the osmotic pressure of an organism's body fluids, detected by osmoreceptors, to maintain the homeostasis of the organism's water content; that is, it maintains the fluid balance and the concentration of electrolytes to keep the body fluids from becoming too diluted or concentrated. Osmotic pressure is a measure of the tendency of water to move into one solution from another by osmosis. The higher the osmotic pressure of a solution, the more water tends to move into it. Pressure must be exerted on the hypertonic side of a selectively permeable membrane to prevent diffusion of water by osmosis from the side containing pure water.

Osmotic dehydration is an operation used for the partial removal of water from plant tissues by immersion in a hypertonic (osmotic) solution.