Tony Charles Middleton (born 1 February 1964 in Winchester) is a former English first-class cricketer. He played for Hampshire making his debut in 1984. He played in two winning one day finals in 1991 and 1992. His best season was in 1992 when he scored 1780 runs at an average of almost 50, including 6 centuries. He was named their Cricket Society's Player of the Year in 1992 and chosen for that winter's England "A" tour to Australia.

He retired in 1995 and since then has been in coaching roles with Hampshire County Cricket Club and is currently their batting coach. His son Fletcha Middleton is a young cricketer playing at Hampshire. [1]

Heath Hilton Streak is a Zimbabwean cricket coach and former cricketer who played for and captained the Zimbabwe national cricket team. By his statistical record, he is the best bowler to have played for Zimbabwe. He is the only Zimbabwean bowler to have taken over 100 Test wickets and one of only four Zimbabwean bowlers to have taken over 100 ODI wickets. He was the head coach of Zimbabwe until early 2018 and was the bowling coach for the Kolkata Knight Riders in the Indian Premier League in 2018.

Malcolm Denzil Marshall was a Barbadian cricketer. Primarily a fast bowler, Marshall is widely regarded as the greatest and most accomplished fast bowler of the modern era in Test cricket. He is often acknowledged as the greatest West Indian fast bowler of all time, and certainly one of the most complete fast bowlers the cricketing world ever saw. His Test bowling average of 20.94 is the best of anyone who has taken 200 or more wickets. He achieved his bowling success despite being, by the standards of other fast bowlers of his time, a short man – he stood at 180 cm, while most of the great quicks have been well above 182 cm and many great West Indian fast bowlers, such as Joel Garner, Curtly Ambrose and Courtney Walsh, were 197 cm or above. He generated fearsome pace from his bowling action, with a dangerous bouncer. Marshall was also a very dangerous lower middle-order batsman with ten Test fifties and seven first-class centuries.

Bruce Antony Reid is a retired Australian cricketer and was bowling coach of the Indian national cricket team on their 2003–04 tour to Australia.

Ian Joseph Harvey is a former Australian cricketer. He was an all-rounder who played 73 One Day Internationals for Australia and was named as one of the five Wisden Cricketers of the Year for 2004 for his performances in county cricket. 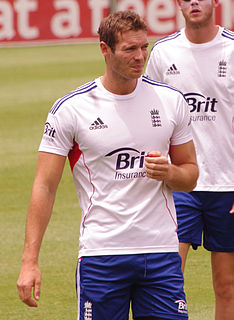 Richard Leonard Johnson is a former international English cricketer. A right-handed batsman and right-arm fast-medium pace swing bowler, Johnson made his first-class debut as a teenager in the 1992 County Championship as an opening bowler for Middlesex. He made headlines in 1994 when he took all ten Derbyshire wickets in their second-innings, returning figures of 10/45. He moved to Somerset in 2001, and made his Test debut two years later. He played three Tests and ten One Day Internationals (ODIs) for England in 2003, his only year of international cricket. He announced his retirement from first-class cricket in October 2007, aged 32. He has since worked as a bowling coach for both Middlesex and Surrey, and as interim head coach for Middlesex.

John Paul Crawley is a former English first-class cricketer who played at international level for England and county cricket for Hampshire and Lancashire. Crawley, one of three brothers who all played first-class cricket, was a right-handed batsman and occasional wicket-keeper.

Nic Pothas is a South African cricket coach and former cricketer who played as a right-handed batsman and fielded as a wicket-keeper. In a total of over 200 first-class matches, he has taken over 500 catches. Pothas is an accomplished batsman, with an average of over 40 in first-class cricket.

Dale Martin Benkenstein is a former South African cricketer and all-rounder and was first-team coach at Hampshire.

Adrian Dimitri Mascarenhas is a former English cricketer. A right-handed batsman and right-arm medium-fast bowler, he played internationally for England, as well as domestically for Hampshire, in the Big Bash League for Hobart Hurricanes, for the Rajasthan Royals and Kings XI Punjab in the Indian Premier League and for the Otago Volts in New Zealand state cricket. In the inaugural Champions League Twenty20, he represented the Otago Volts, as his other teams failed to qualify. He holds the record for most runs in an over in a One Day International for England, with 30, scored off Yuvraj Singh of India on 5 September 2007, at The Oval, London. He was the bowling coach for both Otago Volts and the New Zealand National team, succeeding Shane Bond after the 2015 Cricket World Cup. He stood down after the 2016 summer for family reasons, which coincided with the retirements of the McCullum Brothers.

Alexander Stuart Kennedy was a Hampshire cricketer and one of the ten highest wicket-takers in first-class cricket.

Vivian Paul Terry is an English former cricketer, who played in two Tests for England in 1984. 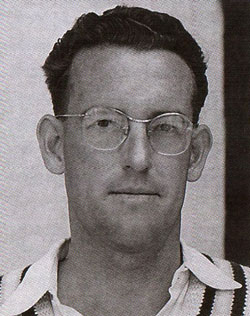 Roy Edwin Marshall was a West Indian cricketer who played in four Tests from 1951 to 1952. He was a Wisden Cricketer of the Year in 1959.

Martin Speight is a former English cricketer. He was a right-handed batsman and a wicket-keeper. After his education at Hurstpierpoint College and St Chad's College, Durham University, he played for Sussex, Wellington and Durham in first-class cricket, before capping off a 17-year career with Northumberland.

Harry Surtees Altham was an English cricketer who became an important figure in the game as an administrator, historian and coach. His Wisden obituary described him as "among the best known personalities in the world of cricket". He died of a heart attack just after he had given an address to a cricket society.

Cardigan Adolphus Connor is an Anguillan born former English cricketer. Connor was a right-handed batsman and a right-arm fast-medium bowler.

Daniel Hondo is a former Zimbabwean cricketer and a current rugby union player. He was a right-handed batsman and a right-arm medium-fast bowler who played for Mashonaland A. He was born in Harare. He plays rugby union as a centre.